Welcome to my last post in the series ‘Movie Reviews of the 2016’s films I’ve missed’. I have already discussed Hardcore Henry and Midnight Special. Today, I will be giving you my thoughts on Zootopia – that Pixar film made by Disney.

IMDb summary: In a city of anthropomorphic animals, a rookie bunny cop and a cynical con artist fox must work together to uncover a conspiracy.

Zootopia’s screenplay was written by Jared Bush (has worked on Big Hero 6 and Moana) and Phil Johnston (wrote Wreck-It Ralph), however, a bunch of people have contributed to the story, including Zootopia’s directors, former The Simpson’s director Jim Reardon and even Frozen’s Jennifer Lee among others. Thankfully, this was not the case of ‘too many cooks in the kitchen make a horrible meal’ but a complete opposite. Zootopia’s story was simple yet sophisticated and the concepts that were discussed in this supposedly kids’ movie – very adult and nuanced. The film reminded me a bit of Inside Out – that children’s movie also tackled big and serious issues.

Zootopia had a strong message about the importance of tolerance, knowledge and open-mind and showed the true awfulness of prejudice, bullying, violence, racism, and sexism. It also tackled the question of biological divide through the prey vs. predator metaphor. Zootopia portrayed the consequences of letting the biological divide become a social one and provided nice commentary on issues such as genders norms, racial, financial and religious differences. Other opposing ideas that were touched upon were conservativism vs. liberalism, idealism vs. reality, nature vs. nurture and us vs. them. The line ‘we might have evolved but we are still animals’ was an extremely telling and truthful commentary on the animalistic side of humans – I’m really happy that Zootopia’s creators were not afraid to be so blunt. In additiom., the film also encouraged its viewers to believe in themselves, to fight the self-doubt, to dream and to work towards their goals, to learn from their mistakes, to never quit and prove the nay-sayers wrong. Moreover, Zootopia showed that revenge is never an answer. Lastly, the film had a nice conclusion and wrapped up nicely – the final message that life is complicated and messy but still beautiful was a really good way to end the picture.

Zootopia also had a very strong writing for all its characters. The different species represented different types of people and the choices of species were simultaneously stereotypical and subversive. The two main characters were also very relatable. I could relate to Officer Judy Hopps on a personal level, like, I’m sure, many millennials with big dreams could, but I also understood and appreciated the sarcasm and the irony of Nick Wilde, the fox.

The picture also had amazing jokes and references. ‘Don’t call a bunny cute’ line was perfect and the extended scene with The Godfather was unbelievable. Breaking Bad reference was neat too.  The joke with the sloths was also nice as well as that moment with Nick and Assistant Mayor, a.k.a. the sheep. In general, Zootopia had a lot of funny situations that were organic. The jokes were never pushed too far but happened naturally.

Zootopia, the movie, reminded me of my favorite childhood book What do people do all day?by Richard Scarry. It’s a picture book with some lines of dialogue – probably closest to a comic but not fully a comic. Anyway, What do people do all day? shows simple activities being carried out by various animals. That book is used to introduce kids to different careers and it used to be favorite read from ages 5 till 10. I still like to flick through it when I’m feeling nostalgic.

Zootopia was directed by Byron Howard (directed Bolt and Tangled, animated Mulan, Brother Bear and Lilo&Stitch) and Rich Moore (directed Wreck-It Ralph). The two directors, as well as all the Disney’s animators, did a wonderful job. The graphics of the landscapes and the character design were marvelous and realistic. The action – exciting and that montage of Hopps arriving in Zootopia – a perfect locational step up. The attention to detail was also spectacular. For example, Hopps was using her iPhone’s (iCarrot’s) flashlight like so many people do nowadays – this little detail made the film even more realistic and contemporary. I also enjoyed the usage of Shakira’s song Try Everything. It was fun and fit the film perfectly. Basically, I feel like Zootopia transcended the animation genre and was really good buddy-cop comedy and a crime drama that just happened to be animated.

All of the members of the cast did a magnificent job. The voices fit the characters perfectly. The leads, Ginnifer Goodwin and Jason Bateman, had really good chemistry. Idris Elba as Chief Bogo was also really good – I could instantly tell that that was him. Lately, Elba has been doing a lot of voice work: he voiced characters in The Jungle Book and Finding Dory. The other standout was Nate Torrence as Officer Benjamin Clawhauser, an obese cheetah. I really liked his performance and the character in general.

In short, Zootopia was an amazing film that was gorgeous to look at, but also engaged the viewers intellectually by discussing important and serious, real-world topics. The voice work was also stellar. In general, it was such a cute film (although, never call a bunny cute if you’re a not bunny!) 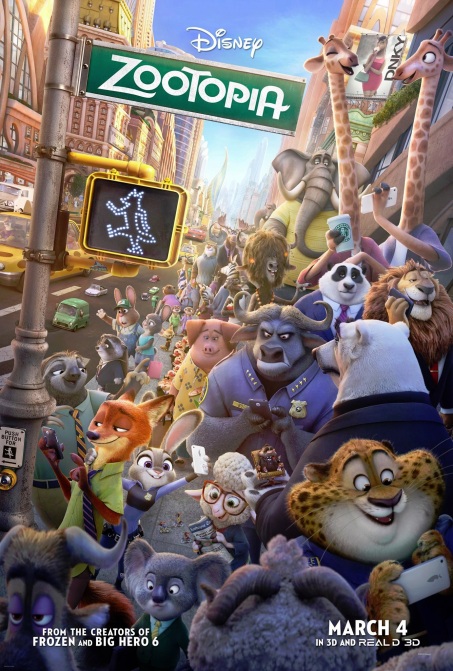