Welcome to a review of a movie that would have been on my Top 10 films of 2016 if I have seen it before the end of the year (when will the studios realize the benefits of the global day-in-day releases?). This is Hidden Figures!

Similarly to Loving and Fences, Hidden Figures is a different kind of movie that spotlights the African-American talent. It’s set during the civil rights movements but doesn’t directly relate to it, even if some of the movement’s ideas are addressed in the film in a really powerful way. This movie also stands out as one of the major female-driven films of the awards season. It has been praised by critics but most importantly it managed to debut at the top of the box office list in the US, meaning that a lot of mainstream moviegoers saw it!

Hidden Figures was written by Allison Schroeder and the director of the picture Theodore Melfi, based on the book of the same name by Margot Lee Shetterly. I absolutely adored the film’s story. I knew about Katherine Goble Johnson before seeing the film (thank you, SciShow on Youtube) but I loved getting to know more about her as well as other African-American women working at NASA. I immensely enjoyed seeing all the different parts of NASA (the 3 of them worked in different departments – calculations, engineering, and computing) and the space race through their distinct perspective. It was actually really interesting to finally see a Cold War movie that didn’t focus on the local conflicts in Vietnam, Korea or Berlin, but a one which looked at the more passive but no less interesting space race.

In addition, I liked that not only the professional but also the private lives of the 3 main characters were presented. This made them all into more well-rounded and realistic characters. Hidden Figures’ writing also focused a lot on the importance of education, portraying it as a key to a better life. I have always been a strong believer of this statement, so the film automatically appealed to me. It was also quite cool that the picture underlined the importance of mathematics, as it is usually the most hated subjects in school (I actually quite liked it). The film’s story, even though set in 1960s, was also contemporary and very topical, if you think about its possible relation to the Women in STEM program.

Lastly, Hidden Figures tackled all kinds of discrimination, mainly sexism and racism but also general discrimination in the work place. Even though half a century has passed, all of these types of bullying are still happening today and should be stopped. Hidden Figures contributes to this conversation by a lot. And even though the film deals with serious topics, it still ends on a positive note and has a very satisfying ending. Katherine, Dorothy, and Mary are not just heroes to all girls or African-Americans. They should be idols to all underdogs and, let’s be frank, we are all underdogs in one field or another.

Hidden Figures was directed by Theodore Melfi and he did a superb job with his 2nd feature (St.Vincent was his directorial debut). The movie was balanced and well-paced, both entertaining and intellectually engaging. It was compelling, suspenseful, and intense and these feelings were only strengthened by the fact that it told a real and not a fictional story. The picture had a few very powerful scenes, like Taraji P.Henson’s character’s speech about the bathroom discrimination as well as Janelle Monáe’s courtroom speech. The film also has a few more personal and touching moments to counteract the powerful and serious scenes, like Mahershala Ali’s character’s proposal to Taraji P. Henson character.

Hidden Figures also had a magnificent soundtrack by Hans Zimmer, Pharrell Williams (he also produced the film), and Benjamin Wallfisch. It was upbeat and fun and really helped to lighten up the serious mood of the picture. When watching the film, I didn’t know who composed the movie’s music, but now, seeing who was involved, I’m not at all surprised that I liked the soundtrack. I mean, Hans Zimmer and Pharrell Williams!? Such a great combo of class and pop!

The three leading ladies of the film were played by Taraji P.Henson (Empire), Octavia Spencer (The Help, Snowpiercer, Zootopia, Divergent) and the newcomer Janelle Monáe. I absolutely loved the individual performances of all the actresses as well as their chemistry in the group scenes. In my mind, the cast is the film’s strongest element so it is not surprising that the movie received a lot of SAG nominations. Octavia Spencer has been getting the majority of the recognition but I would have preferred if they would have spotlighted Taraji P. Henson in the lead actress category instead. Spencer already had her big win with The Help and, more importantly, I thought that Henson’s performance was stronger. If the voters wanted to only reward the film’s in the supporting actress category (like they are doing now),  Janelle Monáe should have received a nomination instead of Octavia Spencer. Monáe is a true breakout star of 2016, as she was also in Moonlight. Don’t get me wrong, Spencer was great too but it would have just been nice to reward the other two actresses as well or instead.

The picture also has a splendid array of secondary characters who were brought to life by great actors. Big Bang Theory’s Jim Parsons played a familiar role (he can’t seem to escape the nerdy scientist part) and did a great job. His character was the one that bullied Katherine the most, but I think that he would have been jealous of anyone. Sadly, Katherine’s gender and skin color made her an easy target. Kirsten Dunst (Midnight Special) also played a part in the film and had an amazing line that just summed up the movie perfectly. I, of course, mean her statement about how the USA are fast to space but slow when it comes to the progress on the ground. Mahershala Ali, who was in Moonlight too, also had a small role and did a nice job. The mainstream audiences know him best from Luke Cage, so his career, both the mainstream and the indie parts of it, are on the rise. Lastly, even Kevin Costner (Draft Day, McFarland, USA) delivered his best and the most interesting performance in years.

In short, Hidden Figures was an excellent film that told an important and fascinating story but did that in an entertaining way. The movie was really well-made behind the scenes and it also had the best on-screen ensemble I’ve seen in a couple of years. 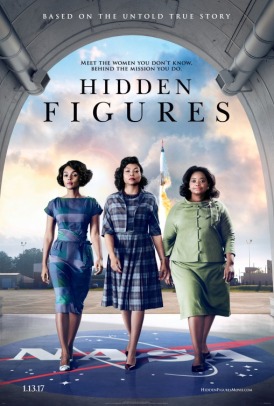