The second (or third) buddy cop comedy of this summer has reached the theaters, so let’s review it!

IMDb summary: After he reconnects with an awkward pal from high school through Facebook, a mild-mannered accountant is lured into the world of international espionage.

The first buddy cop comedy that I had in mind is The Nice Guys, which is basically the retro version of Central Intelligence. Also, we could definitely count Zootopia as a crime comedy. Central Intelligence and Zootopia have a similar humor style – very contemporary, pop-culture based.

Central Intelligence’s script was written by a trio of screenwriters Ike Barinholtz, David Stassen and the director Rawson Marshall Thurber. I’m not familiar with their previous writings projects but I did enjoy the story that they created for this film. I liked the overall message of being one’s own hero and being oneself, although, that last inspirational speech might have been a bit too much. Nevertheless, dealing with life after highs school and the scars that bullying leaves on one’s mind were good topics for the film since so many people, myself included, can relate to them. The crime aspects of the film – not knowing who the bad guys were and all the double crossings – also worked. The comedy was also fine – I enjoyed the pop culture references. The film 16 candles was mentioned a lot and the line ‘See You On The Other Side’ also received a few repeats. Although it did not originate in the Fast and Furious films, I took it as a reference to that franchise, especially the Fast Five film, in which Dwayne Johnson first appeared. Vin Diesel was also name-dropped a couple of times. The line ‘You’re like a snack-sized Denzel’ also made me chuckle.

Rawson Marshall Thurber, who directed We’re The Millers, did a good job directing Central Intelligence. The action was cool, although, he could have used a bit less of the shaky cam. The CGI to make the actors look younger also worked. The pacing could have been better – the movie was a bit slow to start – but wasn’t that bad to ruin the film. I also liked the fact that they included the bloopers before the credits, like the older comedies used to do – it seemed like all the actors had so much fun on set and that made me like the film even more.

I really liked the contrast between Johnson and Hart. Their chemistry was also on-point.

In short, while I don’t usually watch comedies at the cinema, I’m happy that I’ve made an exception for Central Intelligence – it was an entertaining and funny buddy film with great acting and nice message. Not a must see, but a definite recommendation. 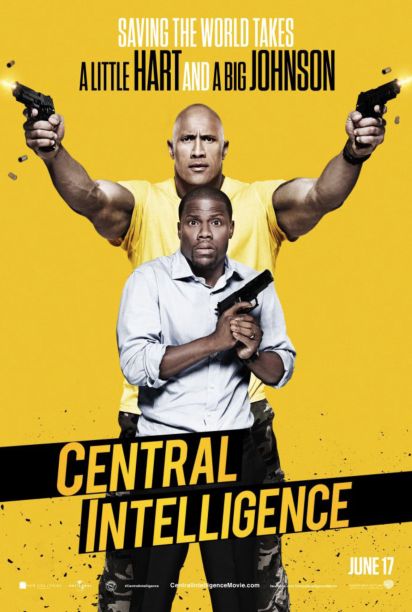