With the DCEU films being critical nightmares, which do not earn as much as they should do, Ben Affleck stepping out as director of the Batman solo movie and The Flash film being completely rewritten, the Warner Bros desperately needs a win concerning its DC properties. Might The Lego Batman Movie be the win? Let’s find out!

IMDb summary: Bruce Wayne must not only deal with the criminals of Gotham City but also the responsibility of raising a boy he adopted.

The Lego Batman Movie was written by Seth Grahame-Smith (who wrote Dark Shadows, Abraham Lincoln: Vampire Hunter, and the novel version of Pride and Prejudice and Zombies), Chris McKenna (a TV comedy writer), Erik Sommers (Spider-Man: Homecoming writer), Jared Stern (who provided additional story material for Wreck-It Ralph), and John Whittington (a newcomer writer who doesn’t have any significant credits on his IMDb page). The duo of writers/directors behind the uber-successful The Lego Movie – the film that started The Lego franchise – Phil Lord and Christopher Miller – helped to produce this spinoff flick as well. I, personally, absolutely loved the writing for this movie.

Let’s star with the on the nose humor as it was such a huge part of the picture. The Lego Batman was basically Deadpool for kids. Like Deadpool, this film didn’t waste its credits and began mocking the studios and the executives in the first few seconds of its runtime. It then moved on to making fun of the comic book movies cliches, such as ‘the unnecessarily complicated bombs’, ‘the villains who explain their plan aloud’ and other plot conveniences.  Plus, I laughed out loud several times when the characters would start making the shooting noise – ‘pew pew’. I also loved the funny inclusion of the comic book sound effect balloons which showed the origins of Batman. Lastly, the movie also poked fun at merchandise with that merch gun scene (I’m definitely guilty of owning some items myself – I was actually wearing my batman sweatshirt at the screening).

The narrative wise, The Lego Batman Movie didn’t bother with neither the setup nor the basic development and origins of the character and I’m actually really glad that they skipped all of that, cause everybody already knows Batman’s background. Nevertheless, the film still did some cool stuff with its main character, for example, portraying him more as an anti-hero and raising the questions of accountability and legitimacy (basically, Captain America: Civil War storyline). The movie also teased and parodied the Batman’s Rogues Gallery and also mocked his gadgets (while at the same time, showing them on screen just so that they could turn them into toys and merch, which they have also made fun of already).

In addition, this film attempted to do something with the Batman and Batgirl relationship, which was very similar to what The Killing Joke movie did. That development really angered the fans and The Killing Joke really suffered from that addition, so I was worried that this idea might damage The Lego Batman too. However, this film dragged the ship more than pushed it, so everything turned out fine in the end. On the other hand, I really liked the relationship that was created for Batman and The Joker. The were literally like an old married couple. The other little details, like Batman’s password (‘Iron Man sucks), the Hugh Hefner-like dressing gown, and his obsessions with romcoms (shout out to Jerry Maguire) were just amazing. I also loved the fact that they managed to include a Nightwing easter egg and actually used the fact that lego figurines can join together as a plot point in the film.

From the thematical standpoint, the movie explored relationships within a family and between friends as well as narcissism. It looked at the fear of human connection which arose from the possibility of being left alone. The final message of the film – that one has to let people in even if they might hurt you by leaving and disappearing – was a neat one.

Chris McKay, who worked as an animator and editor on The Lego Movie, directed The Lego Batman and did a spectacular job. I just loved the fact that he took the grimmest property from the dark and sophisticated DC and made it work as a comedy. The Lego Batman Movie was, truly, one of the best action comedies I’ve seen. It had the non-stop jokes and the fast action (the film was unbelievably energetic) but it still found time for quieter, more heartfelt moments (every animated movie needs ‘the feels’). The only few moments in the picture, which annoyed me a bit, were all the singing and rapping scenes. They juts seemed of a lower level of humor than all the wonderful meta-references and jokes.

Additionally, the animation was just striking. Every shot looked so densely animated and complex – you could just see how much work it has taken to bring this story to life in this format. The Lego Batman Movie was definitely a perfect match between the material and the format, cause I doubt that this narrative could have worked in live action. It would have just come across as stupid (mostly because of all the rapping), but now it blended the right amount of stupidity and cleverness and was, overall,  extremely fun and very enjoyable.

Speaking more about the visuals of the film, I loved seeing the recreations of all the previous Batman films in the lego form. I also really appreciated the lego versions of all the other DC and non-DC villains that cameoed in the film – crossover all the way! We got to see Voldemort, Sauron, King-Kong, The Wicked Witch, and Doctor Who’s Daleks – basically all properties that belong to WB.

I have also noticed, that the majority of DC films (both live-action and animated) are now team-ups. It also seems that one cannot have a Batman movie without Superman or the other Justice League members (that short scene was a neat surprise and maybe it was there to set-up a sort of solo Lego movies for other DC characters?).

Lorne Balfe was responsible for the soundtrack and he picked some very appropriate, witty, and catchy songs for the film. While I didn’t really like the actual Batman song, I loved the updated version of ‘Man in the Mirror’ and felt that it was a more clever jab at Batman rather than the on the nose Batman song.

The film had an amazing voice cast. Will Arnett (a long time voice actor and narrator) just killed it as Bruce Wayne / Batman, while Zach Galifianakis (who has also had some experience with voicing) was an equally amazing Joker. Michael Cera (Sausage Party) brought a sense of innocence to Dick Grayson / Robin, while Rosario Dawson’s (who voices Wonder Woman in most of the direct to video JL films) voice really fit Barbara Gordon / Batgirl – she sounded as and actually was an efficient go-getter. Ralph Fiennes (Kubo and the Two Strings) oozed class as Alfred Pennyworth. Jenny Slate (Zootopia, The Secret Life of Pets) was the voice of Harley Quinn. It might be the Margot Robbie effect, but I wanted Harley to sound sassier.  The filmmakers also managed to get the big name talent – Channing Tatum and Jonah Hill –  to record a few lines as Superman and Green Lantern, respectively (they voiced these characters in The Lego Movie), while Adam DeVine joined them as The Flash.

In short, The Lego Batman Movie was both a successful spin-off of The Lego Movie as well as a great parody of all the comic book movies. Extremely funny and highly enjoyable! 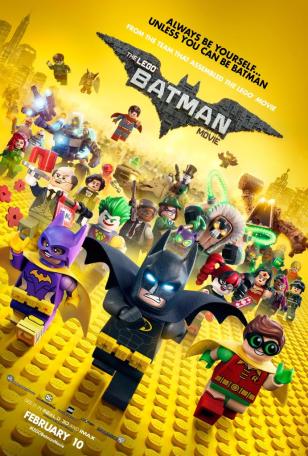