A few weeks ago, the first live-action fairytale reached theaters (The Huntsman: Winter’s War). Now, let’s talk about this summer movie season’s second feature of this genre – The Jungle Book!

IMDb summary: The man-cub Mowgli flees the jungle after a threat from the tiger Shere Khan. Guided by Bagheera the panther and the bear Baloo, Mowgli embarks on a journey of self-discovery, though he also meets creatures who don’t have his best interests at heart.

2016’s live action film is an adaptation of the 1967 animated feature, so, in preparation for this year’s film, I revisited the old animated classic. I concluded this: the 2D animation is still beautiful while the story and the premise remain timeless – I mean, who doesn’t like cute talking and singing animals? My favorite moments from the original film are all the elephant sequences (‘an elephant never forgets‘) and, of course, the iconic song – The Bare Necessities. 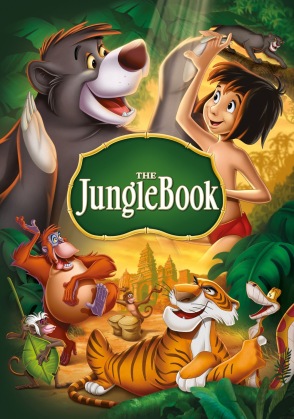 The character of Mowgli has originally been created by the author Rudyard Kipling in the 19th century. While I don’t remember reading any of his stories as a child, I do recall the times when I used to play a Mowgli video game. I was never much of a gamer and never really had the latest technology to play the games on, but I distinctly remember playing some kind of Mowgli game – I think you had to jump and pick up bananas or something. It was the early 2000s, so the games weren’t as advanced as they are now.

2016’s The Jungle Book is not the first, neither the last time that Hollywood is remaking the original animated picture into a live action feature. Back in 1994, Disney made a live-action version of the story with Jason Scott Lee as Mowgli. In 2018, Andy Serkis (Planet of the Apes) will finally release his Jungle Book film – that movie has been pushed back numerous times and will serve as a full directorial debut for Serkis. 2018’s film will also feature a star-studded cast, who will motion capture and voice the animals . However, the 2016’s version also has a bunch of big names, headlining the movie.

The Jungle Book’s screenplay was written by Justin Marks. Marks doesn’t have any big writing credits on his IMDb page. Nevertheless, he did a really nice job with the story.

To begin with, I don’t think that they changed the original story of the animated picture that much (except the very ending) – they only expanded on it a.k.a. added more details. For example, we found out that elephants were the ones who ‘created’ the jungle. The viewers were also introduced to the ideas of truce at the peace rock during the dry season and the Laws of the jungle. Shere Khan also appeared more consistently throughout the film, instead of just showing up at the end. His plan to get Mowgli to come to him was also a nice addition. Moreover, Mowgli’s parent’s backstory, which involved Shere Khan, added more depth to the characters and made the story more logical. The role of the ‘mother’ wolf was also expanded. The only gripe that I had about the narrative of the film was the question why some animals could talk while others could not.

The human village in the film also had a more prominent role – Mowgli got the fire from that village instead of getting it from the lighting, as in the animated picture. This tiny change made the story more sophisticated and more heartfelt. The film also stressed the importance of team-work, although the individual courage was also praised. The ideas of belonging and searching for identity were also explored.

The only big change that the filmmakers made to the plot was the ending  – Mowgli stayed in the jungle, while he usually goes to live in the human village in other versions of the story. However, since this film earned a lot of money during its opening weekend and the critics are loving it as well, Disney will most definitely make a sequel, so they will probably make Mowgli’s move to the human village – the main plotline of the next film.

The Jungle Book was directed by Jon Favreau. I am most familiar with his work on Marvel Phase 1 films – Iron Man 1 +2. A few years ago, he also wrote, directed and starred in comedy-drama Chef, which I quite enjoyed. I also recently watched one of Favreau’s earliest films – a Christmas comedy Elf (I did not like that film and found it extremely annoying).

Speaking about Favreau’s work on  The Jungle Book – I think he successfully brought this classic story to life, for a new generation. The film had more action than the original animated feature and the whole plot was very high energy, starting with the opening chase/run. In addition, the visuals of the scenery, as well as the realistic look of the animals, were both amazing – I was extremely impressed with the CGI. My favorite scenic sequences were the sped-up montage of the dry season and the falling waterfalls. All of the animals looked amazing, but I especially liked Baloo’s and Raksha’s spiky and soft fur versus Bagheera’s sleek looking fur. The little wolf Grey was also extremely cute. Plus, the design of the snake – Kaa –  was also pretty spectacular. I mean, that python was huge! The fire sequences, both in Kaa’s story and the 3rd act of the film, were great as well. Lastly, the ending – the closing of the book –  was very reminiscent of the original animated picture’s beginning and ending and was a nice nod to this story’s past. The way they used the visuals of the book during the actual end credits was also quite nice and entertaining way to finish the movie.

Favreau used computer generated imagery rather than the motion capture technology to bring this story to live, so the majority of the cast only did voice work.

The film’s main character was played by a newcomer Neel Sethi. Child actors have been getting better and better every year, so I don’t even think that it is appropriate to call them child actors – they are just actors. I first spotted this change with Jacob Tremblay in Room. Going back to Sethi as Mowgli: he was really really good – he was appropriately annoying yet still likable and funny. He probably spent the majority of his time on set, interacting with fake models and green screens and he still managed to do an amazing job. I wish the brightest future for this young performer.

In short, The Jungle Book was a feel-good film that put a smile on my face. I sincerely think that both adults and kids can enjoy it. It stressed the idea of being yourself no matter where you are by conveying this message through nice dialogue, spectacular visuals and a heartfelt performance of a newcomer lead actor.