I’m still playing catch up with the summer movies, so let’s review a picture that some people (small numbers of them as it tanked at the box office) saw last month. It’s King Arthur: The Legend of the Sword.

IMDb summary: Robbed of his birthright, Arthur comes up the hard way in the back alleys of the city. But once he pulls the sword from the stone, he is forced to acknowledge his true legacy – whether he likes it or not.

A few general thoughts on the background of the movie: 1. I’m actually a fan of the 2004’s version of King Arthur. It used to be one of my favorite nonanimated childhood movies and the archery sequence on the lake combined with Lord of the Rings: Two Towers final battle were two reasons why I took up archery. 2. While the trailers for the film looked fine, I never expected it to succeed at the box office or to turn a big profit. Neither the two leads are big box office draws, nor is the mythology that the film is based on a hot property. So, bearing that in mind, who, the hell, approved a $175 million budget for this picture?

2017’s King Arthur’s screenplay was credited to the director Guy Ritchie, producer of HP films Lionel Wigram, and, the writer of the new Robin Hood and The Flash movies, Joby Harold. The Judge’s director David Dobkin contributed to the story as well. In general, the writing was of mixed quality. I thought that the narrative (broadly speaking) was fairly straightforward (an hour of Arthur being called into action, and another hour of him attempting to defeat Jude Law’s character), however, the details within the story were really convoluted and even confused (there was too much happening at once).

Thematically, the concepts of egoism and power were suitably touched upon. The ending teases of the round table and all the knights were also pleasant. Other than that, since I don’t know much of King Arthur mythology from the legends, I can’t comment on the stuff they did or didn’t use.

The script also made a lot of interesting choices with the characters. For example, Arthur was written as a witty, talkative and borderline cocky individual – all these ideas are in opposition to the Arthur I’ve alway imagined – serious, reserved, yet quietly proud (basically, the 2004’s movie’s version). Still, overall, I was quite pleased with a different take on a character. I have also seen a lot of complaints online about the female characters of this film, mostly the lack of them. I can definitely see where these people are coming from – a few female characters that are introduced are either sacrificed, portrayed as obese or sexualized tentacled mermaids or are used for decoration purposes. And yet, the main mage character was also a female and she did shine in the movie and displayed her powers (really vaguely defined ones) in a spectacular fashion. The informant female character did not have much to do but at least she was present. Hers and Jude Law’s characters interactions were actually quite neat.

Directing, Editing and the Soundtrack

The Man from U.N.C.L.E.’s and RDJ’s Sherlock Holmes’s director Guy Ritchie helmed King Arthur and did an okay job. The high fantasy medieval setting (which I’m a fan of) was realized quite well (I’m a sucker for the combination of good historical costumes, sword fights, archery, and magic). The epic scope of the film was also worthy of praise. However, the mediocre CGI was quite infuriating, especially in the movie that cost this much to produce. The action scenes – filmed in a video game-like close-ups and slow motion – could have been better too.

The elements of the film, which are the most discussion worthy, were editing and sound design/mixing. The soundtrack on its own (by Daniel Pemberton) was really good and it was, at times, inventively paired with the visuals. However, some combos of image and music did not work. However, even in the bad combos, the song choices weren’t as unfitting as they were in Suicide Squad. A lot of these combination sequences were edited in a music video style – a lot of jump cuts, short snippets of dialogue, and a fast pace. On their own, these sequences seemed quite unique and entertaining (their explosive energy was amazing). However, when these quick sequences were followed by long, drawn-out scenes of people sitting and talking, the final effect turned out to be quite jarring and the whole film – uneven.

In short, King Arthur: The Legend of the Sword was, to my mind, not as bad as everyone said. The filmmakers made some weird choices with the editing and music (at least they tried something different) and did overcomplicate the plot which lacked (sort of) female characters, and yet, I was still pretty entertained by the final product.

Trailer: King Arthur: The Legend of the Sword 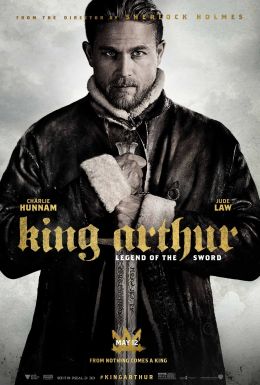 7 thoughts on “Movie review: King Arthur: Legend of the Sword ”