Welcome to another movie review. This time, we are discussing Warcraft or Warcraft: The Begining – Hollywood’s latest try to make video game movies a thing.

IMDb summary: The peaceful realm of Azeroth stands on the brink of war as its civilization faces a fearsome race of invaders: orc warriors fleeing their dying home to colonize another. As a portal opens to connect the two worlds, one army faces destruction and the other faces extinction. From opposing sides, two heroes are set on a collision course that will decide the fate of their family, their people, and their home.

As you all probably know, Warcraft: The Movie is based on a series of video games (Warcraft and World of Warcraft). I, personally, knew nothing about the game except that it was set in a fantasy world. So, I was part of the audience, which would either make or break this movie – a non-fan who still chooses this film over the others.

In general, I have always been fairly skeptical about video game inspired films. I have seen the worst (Hitman Agent 47), the bad (Pixels, Prince of Persia), the okay (Need For Speed) and the great (Scott Pilgrim vs. The World – a film that is not even based on a video game but feels like one). I still need to watch The Angry Birds Movie and I am also quite interested in Assassin’s Creed film because I’m a fan of Fassbender and I have read an Assassin’s Creed comic.

Speaking about Warcraft – it is currently my favorite cinematic adaptation of a video game. I don’t know why the critics are so harsh to judge it and are not evaluating it for what it is. I had an amazing time watching the picture, was a bit lost at first, but quickly found my way. I can’t say ‘No’ to a movie that deals with high fantasy concepts (like LORD, GOT). I’m actually even considering trying out the game or at least researching the role a bit.

The film was written by Charles Leavitt and the director Duncan Jones. I though that Warcraft’s script was a bit better than Leavitt’s last film’s – In The Heart Of The Sea – script and vastly better than his second to last’s film’s – Seventh Son – screenplay.

The film had a lot of characters and they didn’t receive much development but I think that they all got enough to peak my interest. I also liked the fact that the characters died, thus, the stakes were high. The ending was kinda weird but I understood why they left it so open – they are hoping for a sequel. I also wish that the film succeeds adequately for this story to be allowed to continue on the big screen.

The film also had nice themes and messages. I liked the notion that the traditions are superior to the leaders. I also liked the inclusion of values such as family, honor, sacrifice and tolerance. The importance of survival and creating/finding a home was also a nice advice to spread.

The movie was directed by Duncan Jones. I really enjoyed his debut film – an independent sci-fi feature Moon. I also liked what he did with Warcraft. I appreciated the plethora of locations and the world-building in general. The action was also exciting – the shots from the ground-up and the over-the-shoulder-reverse shots actually allowed me to feel like I was in a video game. The CGI was also the best that I’ve seen in years – the faces of the Orcs looked alive – with real emotions and real sweat, blood, tears. The end credits were also excellent.

The movie’s few had quite a few unfamiliar faces (at least to me), but I did enjoy all of their performances. Some were better, some were worse, but on average, everybody did good.

I really liked Viking’s Travis Fimmel in the lead as Lothar. He was charming, witty and a skilled and loyal fighter. MI: Ghost Protocol’s Paula Patton as Garona was also a nice and interesting character and I liked her role during the finale. The Finest Hours’s Ben Foster as Medivh, the Guardian was also good but a bit cartoonish at times. I was also pleased to see one of my favorite actors Dominic Cooper (Need For Speed and Preacher) as King Llane and I did like his noble act at the end. Cooper’s co-star on Preacher Ruth Negga (Agents Of S.H.I.E.L.D.) played the Queen Taria and also did a wonderful job – I loved her final speech as well as her interactions with Garona. The last human character, Ben Schnetzer’s Khadgar was a bit annoying at times, but I have a feeling that he will play an even bigger role in the future films.

The CGI/motion capture part of the cast consisted of Toby Kebbell as Durotan, Robert Kazinsky as Orgrim, Daniel Wu as Gul’dan and Anna Galvin as Draka among many others. As I have already mentioned, the effects looked amazing, however, the actors’ performances, underneath the motion capture technology, were also stellar. They not only looked like living beings, they were actually alive on screen. I’m not that familiar with the previous work of these actors, except Kebbell. He was in that awful Fantastic Four film last year, but I think he redeemed himself with Warcraft and will also be in Kong: Skull Island next year. Kazinsky had a small role in Pacific Rim, while Galvin has mostly done TV work. I haven’t seen any film’s with Wu before, but I did like him as the main villain – he did looked menacing and acted appropriately.

All in all, I had a great time with Warcraft. It exceeded my expectations and definitely pleased a non-fan. I had a few fans of the game sitting beside me at the screening and they also seemed really excited and entertained. Hope the sequel happens! 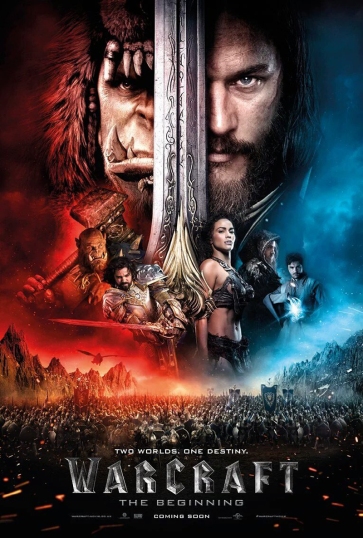