I went to the cinema too many times this week, so I apologize for a bunch of back-to-back movie reviews. I promise the next post will not be about any film! But for now, let’s review The Man from U.N.C.L.E. – to my mind, one of the better films of this summer.

The Man from U.N.C.L.E. is based on a 1964 TV show with the same name. At first, I was hoping that this film was based on an original idea and only while writing this review I found out that it’s an adaptation of an old TV series. I guess we can’t escape the remake zone anymore…However, while nowadays the word ‘remake’ instantly feels like a bad idea (for example, Fantastic Four), The Man from U.N.C.L.E. is a really solid and enjoyable film.

IMDb summary: In the early 1960s, CIA agent Napoleon Solo and KGB operative Illya Kuryakin participate in a joint mission against a mysterious criminal organization, which is working to proliferate nuclear weapons.

As you probably know, I am a huge history buff, so any movie set in the past is an instant favorite of mine. The Man from U.N.C.L.E. is set during the Cold War – the most recent historical event and it deals with the aforementioned war’s biggest problem – the creation of an atomic bomb. I love when movies interweave real-life events and figures into their plots. The idea of making a CIA agent and a KGB agent work together is also brilliant.

Since the movie is set in the 1960s, the costumes play a huge part in the film. If the appearance of the characters miss-matches the timeline, the viewers are instantaneously taken out of the movie. Thankfully, that does not happen in this film. All the costumes are spectacular and appropriate to the period. If you have read my post about the fashion exhibition that I’ve recently visited (here), you may know that 1960s fashion is one of my favorites, so this film definitely appealed to me on that level. And even though I am a girl and should have been jealous of the girls for having amazing dresses, I was feeling a huge suit envy, because the men of the film looked dashing. BTW, the scene in a clothing store is very funny – look out for it.

The setting and the architecture were also wonderful. The characters traveled trough a variety of different locations but all of them were unique and interesting in their own way. The final chase scene on a private island had a beautiful scenery as well,

This film was directed and written by Guy Ritchie (Lionel Wigram also helped with the script) who directed the latest Sherlock Holmes adaptation and its sequel starring Robert Downey Jr. Ritchie is also making a King Arthur film set to be released in 2016. (Antoine Fuqua’s King Arthur from 2004 is one of my favorite films ever, so I can’t wait for this one as well. On a side note, I’ve already seen Fuqua’s latest film Southpaw, the review of it will be released during the weekend). Speaking about U.N.C.L.E, that film had amazing directing. The shots were heavily stylized, so that definitely made the film stand out from other Hollywood action flicks. While I am not a huge fan of contemporary spy dramas/crime dramas (except Mission Impossible and James Bond), this one, with its historical setting and unique point of you, definitely pleases me. It reminded me a bit of Kingsman The Secret Service (review). That movie had a unique setting and a quirky premise and so did U.N.C.L.E. Both of the films also created their own sub-genre – weird action comedy spy drama. Moreover, while Kingsman had amazing long shots, U.N.C.L.E. had a few unique styles of filming as well. Some scenes looked like they came out straight from a graphic novel, while others reminded me of the actual pages of a comic book with a few different panels appearing on screen. Zoom in/zoom out technique of filming was also present during the final action piece and it looked really cool.

The main trio of the film was played by Henry Cavill, Armie Hammer, and Alicia Vikander.

Henry Cavill (Superman) is British but plays an American. However, his accent never came through and he killed it in this role. Not only did he look amazing but he felt like James Bond from old movies – efficient and confident womanizer.

Armie Hammer played the Russian agent and although Hammer himself is an American, his great-grandfather had ties with the Soviet Union, so there is a small real-life connection with his role. Armie Hammer was also really great in the role and his chemistry with Cavill was amazing. I hope that this will be the redeeming film for Hammer because he only stared in critical and financial flops these past 5 years (for example, The Lone Ranger). His latest successful film – 2010’s The Social Network.

Swedish actress Alicia Vikander played the leading lady of the film – a German mechanic (I love when movies switch up gender roles – I like cars too and I am a girl) Gabby who was also a British Spy. The twist involving her character was a surprising one for me. Vikander starred in a plethora of movies this year. in 2015, she played the AI in Ex-Machina (loved that film) and an English writer Vera Brittain in the Testament of Youth – a World War I memoir (review coming soon). She also had roles in 2012’s Anna Karenina (review) and 2014’s terrible adaptation of a great book – Seventh Son. I’ve enjoyed almost all the movie that Vikander started in and I can’t wait to see how her career evolves. She will start in a highly anticipated The Danish Girl alongside recent Oscar winner Eddie Redmayne. That film will probably be nominated for an Oscar, so Vikander might get her big break with critics very soon. However, her mainstream career will also get a boost, because she will be in the 5th Bourne film set to be released next year.

The main villain of the film was played by Australian actress Elizabeth Debicki, who shined in a supporting role in 2013’s The Great Gatsby. She did a nice job playing the villainous Victoria Vinciguerra and Italian actor Luca Calvani starred as her husband.

This film definitely had one of the most diverse casts: Americans, Brits, and Germans were sharing the screen with Italians and a Swedish actress. I love when films include a wide variety of nationalities because Hollywood films are seen all around the world, so they should represent all of their audiences and not just the domestic ones.

All in all, The Man from U.N.C.L.E (which stands for United Network Command for Law and Enforcement) was a pleasant surprise. I didn’t expect to like the movies as much as I did. The plot was interesting, the action and visual effects – pleasing to the eye and the acting – just superb. They definitely left room for a sequel at the end of the film, but I doubt that they will make it because U.N.C.L.E. isn’t doing so great in a box office. But I will have my fingers crossed and you should too.

Trailer: The Man from U.N.C.L.E. trailer 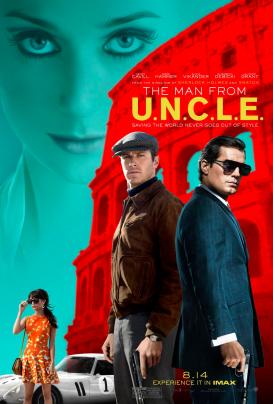