Before the highly anticipated The Hunger Games finale rolls into theaters in November, let’s review the latest entry in a different dystopian franchise, which ultimately will be compared to both THG and Divergent series’ films with or without its permission. Let’s talk about Maze Runner: The Scorch Trials.

IMDb summary: After having escaped the Maze, the Gladers now face a new set of challenges on the open roads of a desolate landscape filled with unimaginable obstacles.

The first thing that I would like to mention when talking about this film is the speed at which it was made. The first film in the series (review) was released in September of last year and the studio only greenlit the sequel when they saw, how much money the first film made. So, this means that they had less than a year to shoot and edit the second installment. For me, that seems really fast. Some movies get stuck in stages of pre-production or production for years and this one was shot, edited, advertised and distributed in 10 months time. Usually, such a short production period suggests that the movie was rushed and, consequently, might not be great. Thankfully, that’s not the case with The Scorch Trials.

As some of you may know, this film franchise is based on a book series by James Dashner. I loved the book series and have read all 3 novels before going to see the first film. Now, I don’t really remember  all the details from the book, but can tell you that they changed a lot of it. However, as I have said numerous time before, I don’t care if the film’s creators alter the plot because I treat the book and the movie as two separate mediums and two different interpretations of the same story. Still, it’s interesting to see what is the same and what is different between the book and the motion picture. Though, which story is better is definitely not the argument that I want to have here.

Anyway, as much as I remember from the book, I can tell you that they did change much. While all the main points of the story were similar and mostly all of the characters from the book made it into the film, the details of the plot differed a lot. To begin with, the Gladers escaped from the facility at the beginning of the story for completely different reasons. Teresa and Thomas couldn’t communicate telepathically, so their relationship wasn’t that well realized in the film as it was in the book. Also, tattoos/title tags on the necks of the Gladers were not present in the film. These tags really raised tension between the characters in the book, so if they would have used them in a film, maybe we would have gotten some more character development/ conflict/dialogue and not just a lot of running. Lastly, the book had no Right Arm subplot and the ending of the film was very different from the ending of the book. However, I can at least imagine how they can get Thomas to a place that he was supposed to be in at the end of The Scorch Trials if they decide to follow the 3rd book a bit more.

The film’s screenplay was written by T.S. Nowlin, so those of you who like the book’s and film’s story to be exactly the same can be angry at him. (Please, don’t be!). Nowlin wrote the screenplay of the first adaptation and will probably be writing the script for the last film as well. He doesn’t have any other writing credits on his IMDb page, but he has produced a few independent films. I applaud his efforts on The Scorch Trials because he handled a plethora of characters and variety of different events, which influenced each other, quite nicely.

The movie was directed by Wes Ball. He has also directed the first installment, so there is no shift in the tone. The wide shots in the Scorch were realized beautifully, especially when you could see the profiles of all the characters. Action scenes were also exciting and fun to watch. If Ball returns to direct The Death Cure (an adaptation of the last novel in the series), he said that they won’t split the film into two parts, which I’m very happy about, so I do hope that he returns. That film is planned to be released in 2017, so they will have more time to actually produce it (update: the movie was pushed back to 2018 because of Dylan O’Brien’s injury on set). In addition, Ball is set to direct an adaptation of Fall of Gods – an epic Norse fantasy. I would love to see that one as well.

This movie, as a lot of other dystopian/futuristic films, had a lot of CGI in it. The landscapes were beautiful and the zombie-like-creatures, who were sick with the Flare virus, were scary and ugly. Everything looked very realistic, especially when you factor in the cost of CGI and the budget of this film. The 1st Maze Runner was made for only 35 million dollars, so I don’t think that they’ve spent  a lot more than that on the 2nd film as well. At best, the studio could have given them 50 to 60 million dollars to work with. Other dystopian films cost a lot more, for example, Mockingjay Part 1 had the budget of 125 million dollars, while Insurgent was made for 110 million. To my mind, all of these 3 YA adaptations have the similar level of computer effects, so props to The Scorch Trials for saving money. And yes, I know that big name actresses like Jennifer Lawrence and Shailene Woodley have much bigger salaries than Dylan O’Brien, but even if you take that into consideration, The Scorch Trials still has the smallest amount to spend on visual effects.

This movie had a lot of character and all of them were realized quite well with a limited amount of screen time. This movie also received a lot of praises for how diverse its cast is.

All in all, Maze Runner: The Scorch Trials is a great adaptation of YA novel as well as an improvement in the franchise. I might be biased, because I am a fan of the dystopian genre, but I highly suggest you go see this film for a number of reasons, for example: if you want to see a male lead in a YA movie after a bunch of female-driven films, if you want more action than you got in Mockingjay Part 1, if you are a fan of any of the up-and-coming actors that are part of this huge cast or if you just want to have a good time at the cinema.

P.S. The review of the 1st film – The Maze Runner – is my most viewed post ever, so I guess this franchise has quite a few loyal fans or at least plenty of people who are interested in it. 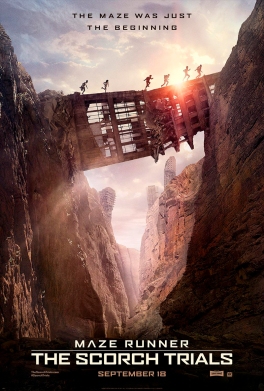