While technically the awards’ season hasn’t started yet, I believe that we have our first solid contender for the Best Picture nomination. You know how every year at least one more mainstream movie gets nominated? (For example, last year it was American Sniper, a year before that – Gravity.) Well, I think that Everest will be this year’s awards nominated blockbuster. Let’s review it!

IMDb summary: A climbing expedition on Mt. Everest is devastated by a severe snow storm.

Everest film is based on the real events of 1996 Mount Everest disaster. I, personally, knew nothing about this tragic event, since I wasn’t even born when it happened. Also, while I knew that the movie was based on real life events, I didn’t want to research them much beforehand, so that I would not spoil anything for myself. However, I will spoil some stuff in this review, so if you haven’t seen the film and don’t know the real story like I didn’t know it, maybe come back to the review after you watch the film. If you know the story or just don’t care about the spoilers, please – read on.

So, as with all Hollywood movies, one usually hopes for a happy ending. Well, it’s not the case with Everest. The most interesting part is the fact that until the very last minute, I was hoping for a happy ending. I was sure that we, as an audience, would get one. And only when the credits and the memorials came up, I’ve realized that this is not that type of a movie. Huge props to the creators of the film, who were able to keep the audience invested into the film till the very end. Also, they were able to break out of the Hollywood movie stereotype/pattern , which has a somewhat predictable ending and a plot filled with cliches.

Not only does this film keep you invested till the very last minute, it affects your emotions a lot. While at the beginning of the film, you can find some inspirational stuff about following your dreams, at the end, you ultimately arrive at the conclusion that some dreams are not worth risking your life for. Or maybe they are for some people? That’s an open discussion. For me, the film was extremely sad, especially the 2nd part of it and the ending was heartbreaking. I don’t really cry in movies, but I was really tearing up in this one. Thank god, that I was the only person in the last row.

This screenplay for the film was written by two British screenwriters – William Nicholson and Simon Beaufoy. Nicholson was a co-writer on Gladiator and has received an Oscar nomination for that film. He has also written a few of my favorite films – Les Miserables, Mandela: Long Walk to Freedom and Unbroken (co-writer). Beaufoy has an Oscar for writing a script for Slumdog Millionaire and he was also one of the writers on the second Hunger Games film – Catching Fire.

I loved what they did with the Everest screenplay. The film had a lot of characters, but they all had their little moments to shine. As a result, this necessary character development allowed the viewers to feel connected to the characters and really care for them in the times of crisis.

Also, the idea that companies like Adventure Consultants and Mountain Madness, who specialize in taking tourists to the summit of the Everest, really exist was a surprising one for me. I knew that were people who want to climb to the highest points of Earth, but I guess I never really expected somebody to allow them to do that for profit. Or that anyone would risk their life for such profit. But, I suppose if there are companies who would take tourists to space, you can’t expect people not to look for financial benefits down here on Earth. Also, as with every sport or occupation, there is a type of rush and desire to reach higher (literally, in their case), so I guess it shouldn’t be that shocking to me.

The film was directed by Baltasar Kormákur from Iceland. I haven’t seen his other films, but I’ve adored the visuals of Everest. From what I saw in the behind the scenes videos, I can tell you that they filmed a lot of this film on location. And even if they used some green screen and CGI, you could never tell the difference – the film was seamlessly edited. In addition, the scenery of the mountain range was beautiful and terrifying and the same time. The actual climbing footage was suspenseful and exciting.

This movie has a huge ensemble cast full of A-list actors and all of them bring their A-game. (A-listers and their A-game – sorry for the pun). I will only talk about a few of my favorite performances because this review would be way too long if I spoke about each and every character. Also, since in today’s world, you can’t review the movie without mentioning the color of the actors’ skin, I will just tell you that this film’s cast is predominately white. However, whitewashing is not the issue to the masses, because the film depicts real-life events which involved mainly white people. I’ve gotten extremely tired of people noticing the skin color of the actor before they notice the actual person, so, I hope you felt the sarcasm in a few sentences before this one. Let’s move on.

All in all, Everest is so far my favorite film of this fall and, in my opinion, a strong contender for the awards season. I hope that its release date (an early one) won’t be the thing that stops it from getting the recognition it deserves. The film is visually appealing to the eyes and emotionally captivating for the soul. Huge ensemble cast brings their A-game to the table, while the accomplished screenwriters and the director do justice to this heartbreaking real life disaster story. 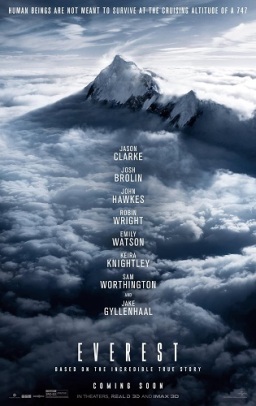