Another YA adaptation from a once visionary director has hit theaters, so, let’s take it apart! This is the review of Miss Peregrine’s Home for Peculiar Children!

IMDb summary: When Jacob discovers clues to a mystery that stretches across time, he finds Miss Peregrine’s Home for Peculiar Children. But the danger deepens after he gets to know the residents and learns about their special powers.

Allow me to begin by saying that I think that this movie (and the book) has one of the coolest names ever. Yes, it is quite long, weird, and hard to remember, but that’s what makes it special. Just the name alone tells you a lot about the story, but, at the same time, doesn’t give anything away. I wanted to start this review with a compliment because I imagine I will be quite hard on the film in the following paragraphs since I had a number of problem with it.

The narrative: the book, the changes, and the screenplay

The trilogy of books by Ransom Riggs that inspired this film was one of the two YA series that I checked out this year, other being the Engelsfors series by M.Strandberg and S.Bergmark Elfgren. I have always been a fan of fantasy, so I knew that I would enjoy the novels. I also really liked the role that the old vintage photographs played in the making of the books and how they were used in the final product. Those pictures really made the series stand out from the other numerous YA franchises out there.

However, before going to see this film, I questioned whether it can become a successful cinematic trilogy since YA adaptations have been going down both in quality and in the box office numbers. Mockingjay Part 2 was a disappointing finale that didn’t earn as much as expected, Allegiant absolutely crashed and burn – didn’t even earn enough to get the final entry in the franchise made into a film and the release of The Maze Runner‘s final movie had to be postponed due to Dylan O’Brien’s injury on set. Will the audiences still want to see The Death Cure a year later? Will they show up to support an altogether new franchise? I guess, we’ll have to wait and see.

The film’s script was written by Jane Goldman – a long time co-writing partner of Matthew Vaughn. Together, they have worked on movies such as Kingsmen: The Secret Service, X-Men: First Class, Stardust and Kick-Ass. Miss Peregrine Home for Peculiar Children was her second solo writing project, first being the period horror picture The Woman in Black.

As usual, when adapting a piece of literature to the big screen, some (or a lot) of details of the narrative are changed. Miss Peregrine’s Home for Peculiar Children was no exception. For the first two acts, the film followed the book pretty closely but it did create a completely new and different 3rd act. Concerning the smaller alterations, I’ll try to list as much of them as I could spot:

A few other points on the script of the feature. To begin with, the film had an awful amount of obvious exposition. The characters would just sit around listening to each other tell important points of the backstory. Half of that exposition could have been incorporated more organically. Secondly, the writing for Jacob was quite awful – he mostly stood around asking questions or reacting to stuff. He was quite a useless hero – it there will be a sequel, I want him to take charge of his situation much more. Actually, he kinda did that at the end of the film, although we didn’t see it because they just montaged through his individual travels. Thirdly, the writing for Jacob’s parents was paper-thin. They were super one dimensional – their one character trait was the fact that they don’t really care about their son. Lastly, gonna end on a positive note and praise the picture for adding a couple of interesting moments to the story: one, Peregrine shooting the hollow was a cool scene and, two, young Abraham’s call was a nice emotional detail.

Although I try my best to always allow the movie to stand on its own, this time, I’m just gonna come out and say that I liked the book’s story better. I’d love to see a sequel that is closer to the second book’s (Hollow City) plot but I doubt it’s possible since the narrative has gone into a way different direction.

Tim Burton used to be an imaginary and fantastic director but he seems to have run out of steam lately. I have even done a separate post on his filmography before Alice 2 came out earlier this year. Miss Peregrine’s Home for Peculiar Children and Tim Burton seemed like a match made in heaven between the source material and the director, however, the movie was just fine. Nothing spectacular or special. The visuals were great, I liked how the film opened with the photos and the letters – it was a nice optical callback to the photographs in the book. The CGI and the design of the monsters were cool too. The slight steampunk vibes were also appreciated. However, the decision to allow (or make) the actors overdramatize some line and scenes, the awkward and choppy editing and the pacing problems (rushing through the setup, dragging in the middle, rushing in the end) were just a few of the flaws of the flick that Burton should have fixed.

In summary, Miss Peregrine’s Home for Peculiar Children was promising but didn’t really fulfill any of the promises as much as it could have. The story started out good but fell flat in the 3rd act, the directing was disjointed and the acting – only so-so. 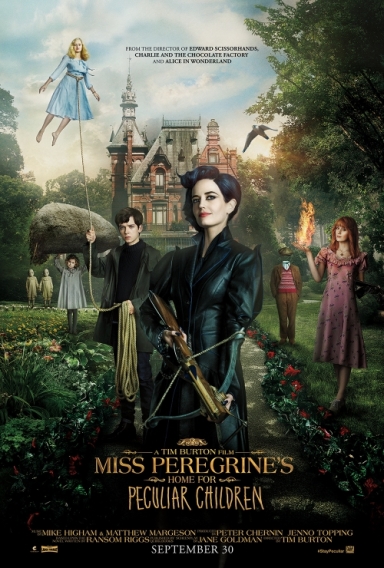