The Giver movie has finally opened in my country, so this is going to be my review!

Lowry’s book The Giver was released in 1993 (It took 21 years to make a movie out of this book!) followed by Gathering Blue (2000), Messenger (2004) and Son (2012). Currently, I am reading the 3rd book and I am enjoying this series, it raises a lot of questions to me and shows what happens to people who forget what is important in life. 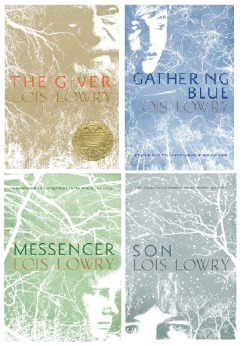 The beginning of the movie seemed a bit rushed, they flew through the bigger part of the book in the first 20-30 minutes, so it was natural that they needed to make some stuff up and plus, they had only less than a 100 pages of the book material left. Basically, in my opinion, the book hadn’t had much action or a clear direction where it was going, to what final piece it was building up to. So, while adapting this sort of slow but thought provoking story into an action flick, they just cleared some things and organized the plot. They also upgraded the setting into a much more modern world which is more appealing to today’s viewers. I was really happy that they included more character development and focused a bit more on other characters instead of focusing just on Thomas. Of course, they added some romance, which is a must for a dystopian YA movie, as well. The last big change – picking a clear antagonist: The Chief Elder played by Meryl Streep.

Streep was amazing as usual. I also enjoyed other big movie stars like Alexander Skarsgard, Katie Holmes and Jeff Bridges in their pay-check roles. Newcomers Odey Rush and Cameron Monaghan also did a nice job. Cameo form Taylor Swift was good but not too memorable. Rising star Brenton Thwaites, which is going to be in 2 more movie this year (Ride and Son of a Gun) and who was also in Maleficient as Prince Phillip and in The Signal (small budget, independent Sci-Fi thriller), did really good job in his role. I also liked how Brenton’s character Jonas spent the bigger part of the movie with a baby and showed that staying with a kids is not just woman’s work.

Now, speaking about the visuals, I loved the transition from black and white to color and I believe that it worked perfectly with the story. All the different shots of the memories seemed a bit chaotic but nice  as well.

All in all, I enjoyed the movie and didn’t mind the changes because all the main plot points stayed the same and some dialogue lines were straight from the book. The film was touching, cute, pleasant but not too complicated. They portrayed human emotions believably, restored my faith in humanity and made me want to be alive and experience everything – even if just for a moment.