I really need to up my introduction game because I’m already getting bored of the whole ‘Welcome to entry #*insert number here*’ thing. It’s #7, though.

Bebe Rexha & Florida Georgia Line’s ‘Meant to Be’ is one of the newer entries on the list. So far, as the list is alphabetical, majority of As and Bs have been dominated by early 2010s. ‘Meant to Be’ is from 2017 – a year that seems to have just gone and yet, it was 2 years ago.

‘Mean to Be’, the marriage of pop and country, spent a record number of weeks on the country chart. Not only was the song uber successful but it also, if not brought about, then at least acted a great signifier of the general changing trends in music during the decade – genre mixing and bending. With more and more walls being broken down (in every aspect ever), it is high time that music starts to reevaluate its quite harsh lines between music genres – lines that don’t really make sense when you think about them twice. Imagine how many great songs we would get if the artists were not afraid (due to expectations placed on certain genres and bands as well as the inherently flawed hierarchy of genres) to try out different genres.

Lastly, I really appreciate the message behind the song – in the contemporary world, we are asked to have everything figured out even though the majority of us don’t. Thus, it’s nice to believe in faith (even if just for 3 minutes) and be reassured that if things are meant to be, then they will work out in the end. May ‘Meant to Be’ be the ‘Let it Be’ of this decade (or even century)? 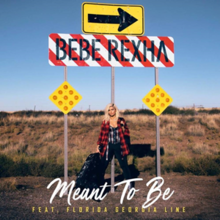