And welcome to a review of a movie that revolves around a character I feel a spiritual connection to. This is Maleficient: Mistress Of Evil!

IMDb summary: Maleficent and her goddaughter Aurora begin to question the complex family ties that bind them as they are pulled in different directions by impending nuptials, unexpected allies, and dark new forces at play.

Out of all Disney dark remakes/reboots/reimagining, 2014’s Maleficent has been somewhat not completely panned by critics, while also being financially successful (in comparison, on the dark front, first Alice was a monetary win, however, the second one had dreadful returns. Neither Nutcracker nor Dumbo didn’t leave an impression on anyone. Some more classical takes like Cinderella and Beauty and the Beast also left a mark. Mary Poppins was a moderate success.

Maleficent 2 was written by Linda Woolverton, Noah Harpster, and Micah Fitzerman-Blue. All three have written the first film as well, whereas Woolverton also penned the aforementioned Alice remake and its sequel. Even though the screenwriters were continuing their own work, they didn’t really respect it, as the opening narration of this film completely dismissed whatever happened in the first picture. And yet, since the idea of truth not mattering if someone can tell a catchy (even if fake) story was a topic explored within the film, I will let this disregard of the first film slide.

What I won’t let slide was the stupidity of the rest of the story, especially its inciting incident. While I am more than willing to suspend my disbelief and accept the existence of fairies and flying half-humans, I cannot forgive the movie for making its characters lack any intelligence or common sense. The inciting incident of the king being cursed is a horrible scene as it is so obviously not the truth. Aurora’s character is also written horribly. Even though she may be kind-hearted, the fact that she seems so gullable does not make her into a character anyone can root for. And even at the end, Aurora does not seem as if she learned anything. Even though she ultimately begins questioning the events happening around her, she still makes a stupid decision in the third act that cost a different character’s life. But this is Disney, so a happy ending is squeezed in there too, with not much explanation.

Not only does the movie try to say something about fake narratives, but it also goes for the big war or peace question. I would like to give props to the writers for trying to have some kind deeper thematical background to the fairytale but I am afraid the movie does not end up saying anything revelatory. But it’s a fairytale, so should I expected anything even remotely close to that? The film also vastly lacks screentime and more action for its titular character. All the bits of the movie that revolve around Maleficent are the best parts. And yet, the story chooses to spend most of its time with humans.

Joachim Rønning directed Maleficent 2. Previously, the director has worked on Pirates of the Caribbean 5. This movie suffers from the same problems his other one did. It looks spectacular but is empty story-wise. Cannot really blame the director for the lacking script, though. Rønning here also does his best with what he is given. The costume department and the production team should also be commended.

Angelina Jolie once again proves to be the case of perfect casting. Her accentuated cheekbones do half the job, though. Still, Jolie manages to balance out sophisticated acting with some dramatic flair needed for the fairytale genre. Michelle Pfeiffer, on the other hand, goes full-cartoon and becomes almost a caricature of the villain. Was the director to scared to tell Pfeiffer to reel it in a bit? Ultimately, the viewer doesn’t know whether they hate the villain Pfeiffer plays or her performance. Jenn Murray who plays Pfeiffer’s sidekick also should have tonned down her performance a bit. Sam Riley is fun to watch as Maleficent’s sidekick once again and he and Jolie do have some fun scenes of strained but enjoyable banter. Elle Fanning, Chiwetel Ejiofor, and Ed Skrein all serve their purpose within the film. Prince Phillip gets recast and is played by Harris Dickinson this time around. He does not really leave any bigger impression than his predecessor Brenton Thwaites did.

In short, Maleficent 2 is a pretty looking but poorly written film. Angelina Jolie shines once again but is not given enough screentime to save the whole film with her spectacular performance. 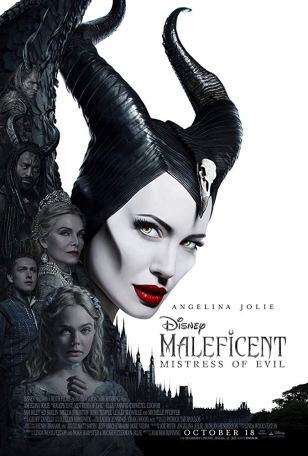