And welcome to a review of the most highly anticipated January movie that disappointed a lot of people. This is Glass!

The movie was directed and written by M. Night Shyamalan – the director that swings from most loved to most hated in a heartbeat. Glass was the third film in the surprise superhero trilogy, also consisting of Unbreakable and Split. Glass was also the film that was supposed to solidify Shyamalan’s return to success after The Visit and Split acted as his comeback (if you don’t remember or have blocked those memories, The Last Airbender and After Earth were the depths he needed to come back from).

The movie’s script was not great. It had a superb premise and an interesting goal – to create a psychological, realistic, and grounded explanation of superheroes. However, the execution and the final product were questionable at best. While I haven’t seen Unbreakable, I loved Split, and I feel like Glass did injustice to both.

The narrative made little sense. The comic book metaphors sounded cool but fell apart when you thought twice about the . The promise of the big showdown was never kept and the big finale just fizzled out. The twists were not surprising but just a Shyamalan-ian gimmick at this point. The secret society reveal made no sense. The released videos seemed like they would also accomplish the opposite effect – not encourage powers but turn more people against the superheroes. The end that the characters met was cheap: all three of them deserved better, as they all have been interesting throughout these movies.

The direction of the film was fine. Glass was quite slow and not particularly engaging. The big third act remained just a promise, probably for financial reasons as CGI is expensive and Blumhouse likes making movies on the cheap. Some cool scenes were crafted by the director, I give him that. He also managed to work well with the actors to get amazing performances out of them. But that may be more because of the caliber of the actors.

Not surprisingly, James McAvoy was truly the standout of the film. Samuel L. Jackson was good too even if a bit cartoonish. Bruce Willis was also good and it was nice seeing him in a film that is not just B level/straight to DVD actioner. Sarah Paulson should get props for playing a senseless character with such conviction too.

In short, Glass was just a glass of disappointment. Wow, that pun makes no sense. 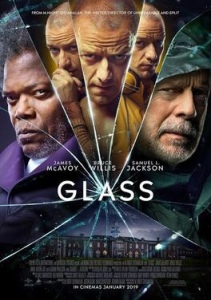 One thought on “Movie review: Glass”