And welcome to a review of a good(?) DC movie that took forever to write. This is Aquaman!

IMDb summary: Arthur Curry, the human-born heir to the underwater kingdom of Atlantis, goes on a quest to prevent a war between the worlds of ocean and land.

Aquaman was written by David Leslie Johnson-McGoldrick and Will Beall with a story by Geoff Johns (who is responsible for the whole od DCEU) and James Wan (who also directed). These writers packed so much into the movie and for a reason. With DCEU’s future being so unclear – the whole thing might be scrapped soon, it looks like the writers attempted to tell a story that could have easily been divided into 2 films or even a whole trilogy. There was a quest upon quest and upon a quest. An origin story on steroids. Weirdly, with so much stuff happening in the film, it didn’t feel messy or convoluted. It somehow worked? I know, I’m as surprised as you’re.

The multiple quests in the film not only helped it to establish quite a few characters but also allowed the film to showcase so much of Aquaman’s world. I also appreciated the fact that the script embraced Aquaman’s inherent silliness but also made it kinda cool. But also still stilly?

The horror (and FF7) director James Wan really succeeded with Aquaman. He nailed the fast-pace and the hefty script: the movie was long but it never dragged and kept up my attention. I also liked its style – sort of space opera but in the ocean (ocean opera? you heard it here first). Wan also showcased the fact that he definitely can direct stellar action scenes. And yet, like with a lot of films, I could take or leave the big third act battle. The CGI wasn’t always perfect too. But at least you could see the flaws in the CGI rather than having to stare into a dark and gloomy screen.

The movie has a weird cast. Jason Momoa was good as Aquaman but he already showed that in Justice League. Amber Heard was a pleasant surprise because I haven’t seen much of her work or heard any good things about it, to be honest. Willem Dafoe was also good and fit the movie better than some of the other actors. The two stand-outs (not in a good way) were Patrick Wilson and Dolph Lundgren. Their performances were not bad but they felt somehow out of place within a movie like Aquaman. Yahya Abdul-Mateen II was really good though, I’m happy that Moonlight gave a real bump to his career. Nicole Kidman was also good and fit the movie much better than Wilson and Lundgren. I guess actors like Defoe and Kidman are so good that they know how to shift their acting talent according to the movie, while Wilson and Lundgren are maybe more one-note/comfortable in a different film.

In short, Aquaman might be the best DCEU film. It’s certainly up there with Wonder Woman (I might have to still give WW the no. 1 spot just because of political/representation reasons). 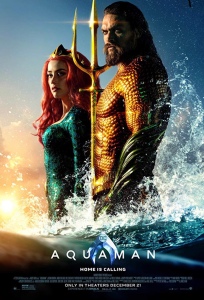 One thought on “Movie review: Aquaman”