And welcome to a review of a movie I thought was better than everyone else did. This is Venom!

IMDb summary: When Eddie Brock acquires the powers of a symbiote, he will have to release his alter-ego “Venom” to save his life.

Venom was written by Jeff Pinkner (The Amazing Spider-Man 2, The Dark Tower, Jumanji), Scott Rosenberg (script doctor on Spider-Man), and Kelly Marcel (Saving Mr.Banks and Fifty Shades of Grey) and their script was okay (better than it had any right to be, looking at the mish-mash that is these writers collected filmography). This film was truly an origin story, so it was quite by the numbers but executed well enough. The set-up was successful and the movie did have callbacks to the things it set up. The science fiction ideas (and the villain’s plan) were definitely more fiction than science but its a comic book movie, so we should not expect anything else. I was quite impressed with the romantic plotline and thought that the dialogue between Hardy’s and Williams’s characters was really good. The jokes were also decent.

While Venom started out as a villain, he has become more of an anti-hero in the comics (so I have heard, haven’t read much of it). He was definitely an anti-hero type in this movie. My one gripe in the film was actually his switch from being a villain to a hero of sorts: I didn’t necessarily find that change of heart believable. Mostly because it wasn’t really explained fully.

Venom was directed by Zombieland’s Ruben Fleischer and he did quite a good job. First, I would like to applaud him for telling a comic book story in under 2hours. Venom was around 100 minutes long and that was perfect: not too short (and rushed) and not too long (and dragging)! The action was good too but not particularly original. Venom vs Riot fights were cool but messy and hard to follow. The CGI of all the symbiotes was okay: really good in some scenes and a bit messy in the scenes of heavy action. The soundtrack of the film had a lot of hip-hop and rap music and that came across to me as the film trying a bit too hard.

The cast was certainly the best part of this film. Tom Hardy (Mad Max, Dunkirk, The Revenant, Legend) was a great lead: he was both a believable everyday-man but also had that charisma of a Hollywood star. Michelle Williams was also great and it was nice seeing her in a more pop-corny film as she usually does more high brow films (Manchester by The Sea, The Greatest Showman, All the Money in the World, I Feel Pretty). Riz Ahmed (Rogue One, Jason Bourne) was also a great villain – he delivered a sleek performance of a self-controlling maniac.

Mid-Credits scene was a teaser for a Venom sequel and a promise that a certain character will show up in the sequel (celebrity cameo included!). Post-credits scene was a bit of a disappointment as it was a teaser for Spider-Man: Into The Spider-Verse. The trailer for that movie also had just come out and was actually showed before Venom. So, a trailer before the film and a teaser after seemed like a bit of a heavy-handed marketing/advertising strategy.

In short, Venom was an entertaining enough comic book movie. I didn’t have many expectations, therefore, I was able to have a good time. 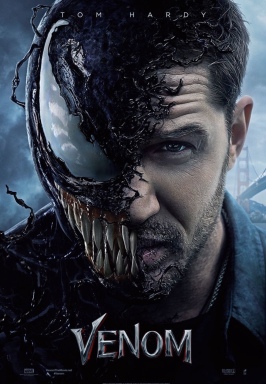