And welcome to the reviews of TWO films that are equally just important as Black Panther was/is! Today, we are discussing Asian representation in Crazy Rich Asians and Searching.

Searching: After his 16-year-old daughter goes missing, a desperate father breaks into her laptop to look for clues to find her.

Even though I usually start my reviews by discussing the writing of the film(s), I thought that these two movies warranted that we discuss the acting and the casting first. While Black Panther was a first big-brand film with a predominately black cast, Crazy Rich Asians was the first American mainstream film with an overall Asian cast (as the title suggests). More importantly, the film showcased the diversity within the Asian community by casting actors that were from or descendant from a plethora of countries: Taiwan, Malaysia, China, South Korea, Hong Kong, The Phillippines, and Singapore. The cast consisted of Constance Wu and Henry Golding (A Simple Favor) as the superb lead couple, and Michelle Yeoh, Gemma Chan, Lisa Lu, Awkwafina (who was also recently in Ocean’s 8), Ken Jeong, Sonoya Mizuno, Chris Pang, Jimmy O. Yang, and Ronny Chieng among others in the supporting roles. Could more Asian identities/actors have been included? Yes. Did they have space for that in the film? Maybe. Did Crazy Rich Asians begin a process of change in Hollywood through which more Asian identities could be portrayed by Asian actors? I really hope so!

Searching didn’t have an Asian-only cast – it had a better thing – a blindly casted Asian lead – a lead that was Asian but his race never once came into play, played superbly by John Cho (of American Pie and Star Trek films).

What I loved even more than these two film’s (and their casts’) separately was the fact that the actors from the two films were so supportive of one another, especially Henry Golding and John Cho. Their mutual cross-promotion was one of the reasons why I put these two reviews together!

Crazy Rich Asians was a book adaptation of Kevin Kwan’s novel of the same name by screenwriters Peter Chiarelli and Adele Lim. Searching was an original screenplay by Aneesh Chaganty (who also directed) and Sev Ohanian. Both of these films took well known Hollywood tropes and genres – romcom and thriller, respectively – and made them feel brand new!

In Crazy Rich Asians, the romantic plotlines and the Cinderella-like tale were not as cliche as I was expecting them to be. The story also had more depth and sophistication than I was expecting. Some great ideas about the differences between Asian experiences (as a native and an immigrant/old culture vs new culture) were also expressed and added layers to the story.

Searching had a great showcase of father’s love and determination. On the flip side, it also showed the negative side of a parent’s love and how that love and ‘everything for one’s child’ attitude might be quite damaging. The end reveal of the plot was quite surprising and I don’t know if it worked completely. Nevertheless, it allowed the movie to look at a couple of more issues – toxic masculinity and obsessive relationships.

John M.Chu (of Step Up and Now You See Me 2) directed Crazy Rich Asians, while Aneesh Chaganty helmed Searching (both directors are also of Asian descent!). Chu handled the world building of Singapore beautifully (the glamour of the culture itself + rich setting made for a neat world to vicariously live in for the audiences a.k.a. me) and also nailed the pacing and the comedic timing of the film. My one critique was that the movie might have been a touch too long.

Chaganty and cinematographer Juan Sebastian Baron made Searching unique by having so much of that film be portrayed with screens on the cinema screen: the opening montage was just brilliant. I never thought that the movie portrayed through social media and technology (screens within the screen) could be so compelling and intense.

In short, Crazy Rich Asians and Searching were two films that not only did a lot in terms of representing an underappreciated group of actors and audiences but were just great movies in general! 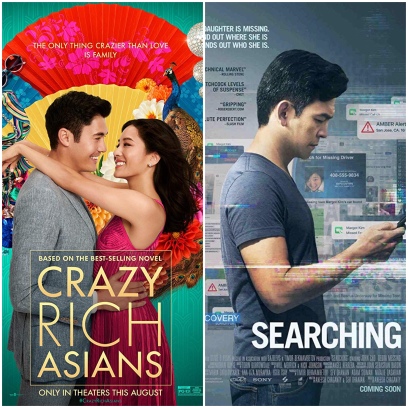