And welcome back to the sporadic AF movie reviews. Ocean’s 8 is the topic for today.

Ocean’s 8 – a spin-off of the original trilogy rather than its reboot (this is no Ghostbusters) – was written by the director of the film Gary Ross and Olivia Milch (she is writing a Barbie movie next, don’t know how to react to that). There was a lot to like in the script. To begin with, I liked how this action film was kept feminine with the focus on the MetGala and diamonds. A decision to make women steal diamonds might be seen as playing into stereotypes. However, I’d argue that by keeping a feminine focus, Ocean’s 8 fights the stereotype that strong women, especially female action stars, have to be masculine. Some of them might be masculine, while others might prefer femininity (or a mixture of the two). And Ocean’s 8 showcases that by having a variety of women of different colors/shapes/sizes/styles as the core characters. While the character development isn’t plentiful, there is enough of it to make each character necessary and at least a tiny bit interesting.

Additionally, while Ocean’s 8 stands on the shoulders of the original Ocean’s trilogy, it doesn’t lean on them too hard, meaning that one can go into this movie not knowing anything of the first 3 films and completely get the plot of this one. As I wasn’t a fan of the original films, I also didn’t mind some of the developments/reveals about the original characters in this film (some fans might actually be legitimately annoyed by them). Personally, my main problem with this movie was its structure. I loved the first two acts – the pre-heist set-up and the actual heist. However, I feel like the whole 3rd act, rather than being a big finale, was a boring wrap-up that dragged immensely. The investigation and the reveals felt both rushed and like the movie was overstaying its welcome.

Gary Ross (of the first Hunger Games film and Free State of Jones) directed Ocean’s 8, while Steven Soderbergh – the director behind Ocean’s 11,12, and 13 – stayed on as a producer. I thought that Ross handled the material well, the narrative made sense and was intense for the most part. Pacing had some issues, especially the pacing of the aforementioned third act. The glitz and the glamours of the MetGala were realized accurately.

Undeniably, the best part about Ocean’s 8 was its cast: Sandra Bullock, Cate Blanchett, Anne Hathaway, Mindy Kaling, Sarah Paulson, Awkwafina, Rihanna, and Helena Bonham Carter. I adored the female solidarity and friendship on display. Cate Blanchett (Thor 3, Cinderella, Carol) was my absolute favorite – I loved her character’s outfits, charisma, and just effortless coolness. I also enjoyed seeing Hathaway (Alice 2) playing the gossip sites’ version of herself. I also loved seeing Bullock, back on screen in a lead role as I feel I haven’t seen her in a big movie in ages (since Gravity). Kaling (A Wrinkle in Time) and Paulson (The Post) were also really fun to see. I loved the uber contemporary vibes that Awkwafina brought to the film and I loved seeing Rihanna actually having a character to play rather than just being there to look pretty (*cough, cough*, Valerian. BTW, I’ve been to her concert some years before and wrote about that). Bonham Carter (Suffragette) was also good in the film, though I feel like she played her typical, slightly awkward and over-the-top type of a personality.

Ocean’s 8 also featured some cool celebrity cameos, some neat cameos by the original cast, and a short appearance by James Corden (Peter Rabbit), who is always a delight to see.

In short, Ocean’s 8 was a great all-female thriller. It might not please everyone, but then again, why does it have too? 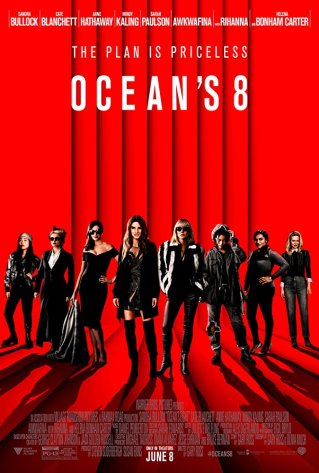 One thought on “Movie review: Ocean’s 8”