And welcome to a review of a movie that requires no introduction – Avengers: Infinity War!

IMDb summary: The Avengers and their allies must be willing to sacrifice all in an attempt to defeat the powerful Thanos before his blitz of devastation and ruin puts an end to the universe.

As per usual, just before we start, these are my previous MCU reviews: Black Panther, Thor: Ragnarok, Spider-Man: Homecoming, Civil War, Doctor Strange, The Winter Soldier, Ant-Man, Age of Ultron, Guardians 1and 2.

Infinity War was written by Christopher Markus and Stephen McFeely (the duo who wrote all the Captain America movie and The Chronicles of Narniacinematic adaptations). There were so many things to love in the script. Firstly, the screenwriters did an amazing job handling the plethora of characters that they had to work with. They didn’t have time to develop any of them really so you do kinda need to have seen at least some of the previous movies to really enjoy this one (but then again, if you are watching Infinity War, you have seen some of the previous 18 films for sure). What the screenwriters did manage very successfully was to give each of the characters some meaningful moments that were either emotional and weighty or funny and entertaining. The different scenes of the various characters meeting each other and interacting were just brilliant. The deep cuts to the MCU lore (cameos and tiny plot elements from other films) were also greatly appreciated. I also liked the fact that script fast-tracked over some meetings and explanations, as that made sure that the movie’s pace stayed top-notch. Secondly, they did an amazing job developing the character of Thanos and explaining his motivations and point of view. Marvel officially doesn’t have a problem with villains no more. Thirdly, the movie did a good job of picking a theme – sacrifice – a sticking to it, through and through.

Fourthly, the script delivered on the unexpected twists and the consequences a.k.a. characters we didn’t forsee died, both throughout the film and in the third act. Every one of those deaths meant something and was felt by every fan in the screening. I’m incredibly interested to see how will these consequences be dealt with in the next film: whether Marvel is gonna go back on some of them or all of them. I would love to see a lot of these characters back but I would also love to see them making the ballsiest move in cinema and not bringing any of them back. The film’s post-credits scene – only one but worth the wait – hints at how the universe will move forward and solve the problem, like Thanos (I wrote that in a ‘How do you solve a problem like Maria’ singing voice).

After nailing the unique political thriller vibes with The Winter Soldier and after managing to work with a massive cast in Civil War, Anthony Russo and Joe Russo were trusted with the biggest Marvel movie yet and they did an excellent job. They made it feel like an event and not just a movie. The vibes this time were cosmic and so so so Marvel Comics-like. The massive group of characters was even bigger this time and all of them were accounted for. The action was epic and explosive and there were so many amazing team-ups and groups during the fight scenes (especially one great episode with my favorite female characters). The quips during the fighting felt very Marvel but not cheesy or annoying. The editing was also clear and seamless.

Infinity War had an awesome display of that perfect Marvel casting and just listing the whole cast is gonna take forever but here we go: Robert Downey Jr. (his new armor is lit), Chris Hemswort (Thor has a great arc), Mark Ruffalo (interesting things happen with Hulk), Chris Evans (still Cap even if not of America), Scarlett Johansson (loved the new look), Benedict Cumberbatch (Doctor Strange has really come into his own), Tom Holland (still a teenager), Chadwick Boseman (still the king), Paul Bettany and Elizabeth Olsen (some great stuff involving the two of them), Anthony Mackie and Don Cheadle (have some great ‘the team-ups of the sidekicks’ moments), Sebastian Stan (also known as a L’Oreal model), Tom Hiddleston (his arc picks up where Ragnarok left off), Idris Elba (his arc might anger some fans/theorists), Benedict Wong (has no cash), Chris Pratt (has a great gag about voice), Pom Klementieff (surprisingly important), Karen Gillan (has a great visual scene), Dave Bautista (the funniest of the cast), Zoe Saldana (Gamora has a briliant arc), Danai Gurira (still a bad-ass), and Letitia Wright (the third member of the science bross) are all back and better than they have ever been.

In short, Avengers: Infinity War is the movie event of the year that has to be watched multiple times to truly be appreciated. My next screening is on Monday, when’s yours? 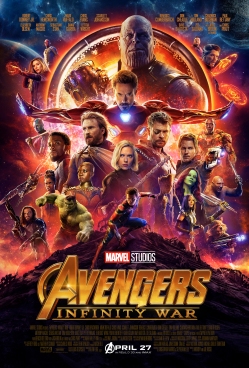