And welcome to Hollywood’s gazillionth try at making video game movies into a thing. This is Tomb Raider!

IMDb summary: Lara Croft, the fiercely independent daughter of a missing adventurer, must push herself beyond her limits when she finds herself on the island where her father disappeared.

Tomb Raider was written by Evan Daugherty (of Divergent, The Huntsman, and TMNT), Geneva Robertson-Dworet (according to IMDb, hasn’t written any movies before this one but has 7 announced projects including MCU’s Captain Marvel), and Alastair Siddons (writer of Trespass Against Us – a movie with Michale Fassbender/new Lara Croft’s real-life husband. Fun connection). This film is based on the famous game series (which I have never played) and also acts as the reboot of the previous Lara Croft movie franchise from the early 2000s (which I don’t remember at all but plan on rewatching in April when I have some more free time). The writing for the new Tomb Raider wasn’t bad but it also wasn’t great either. The narrative itself was structured well enough and the story was interesting too. However, all of us have seen this movie before and more than once. We have also previously heard a good portion of the film’s by the numbers dialogue too.

The movie started promising. The set-up was interesting and I did like how contemporary it was (Lara being a deliveroo type of food courier). The only part of the set-up that sort of came out of nowhere was the invention of the villain – Trinity organization was mentioned in passing and was never developed more throughout the film. There were a plethora of hints at it in the closing scenes of the picture but whether the sequel will happen for those hints to result in anything substantial is a big question. No one is sure whether we will get to see Lara with her two signature guns either, which she acquired in the last scene of the film (I did like her with bow and arrows a lot, though). Thematically, Tomb Raider toyed with the ideas of history and the supernatural. I did like the historical quest/puzzle element of the film and I do appreciate the fact that they didn’t go the full supernatural route like The Mummy did. In general, the picture was an okay origin story and a good-enough reintroduction of the character but with so many other big franchises currently being produced, I don’t really know whether there is space for Lara Croft.

Tomb Raider was directed by a Norwegian director Roar Uthaug and, as far as I can tell, this film was his English language/Hollywood debut. I thought he did a good job realizing the flawed script. The pacing was okay too. I mostly had problems with the tone and the action of the film. The in-camera/on-location action was executed really well and made the movie feel like a tight action film. I especially liked the opening bike chase sequence, the chase on the boats in Hong Kong, and all the hand-to-hand combat in general. However, some other action scenes were really CGI heavy and had so many unbelievable moments that made them laughable. The shipwreck scene was super dark and filmed in a really shaky fashion, while the plane/river sequence just had way too many lucky coincidences. Those over the top, unrealistic action sequences made Tomb Raider feel like a video game movie, which I guess was the point. The final action sequence in the tomb was a mixed bag of good realistic action of an action movie and over the top CGI of a video game movie. I can’t really comprehend why somebody would make a movie lean more towards video game-ness, when the quality and the reaction to all the previous video games was so poor and when that same movie would be so much much better if it went the more classical/grounded action movie route.

Alicia Vikander played the lead and was actually really good as Lara Croft. Just the physical shape alone that the actress was able to achieve for this role was incredible, worthy of praise, and a bit inspiring. Made me want to do a couple of more extra crunches at the gym. I have always been impressed with Vikander’s indie/awards’ work (like The Danish Girl for which she won an Oscar and even Tulip Fever – the film was bad but she was good in it) and I was really glad to see her cast in a more mainstream/bigger budget/higher profile film. She has had supporting roles in mainstream films before, like – The Man From U.N.C.L.E. and Jason Bourne, but this is the first time she is headlining a movie of this scale and hopefully, a whole franchise. Still, I do doubt whether this movie will spawn a franchise but I also don’t think that it will damage Vikander’s career in any way if it doesn’t.

Walton Goggins (The Hateful Eight) was fine as the typical power hungry and blind-to-everything villain and I think I have seen Goggins in this role before (like in The Death Cure just a month ago). Dominic West (Genius, Money Monster) played the role of an equally delirious man and was okay in it. The writing didn’t make either of these characters sympathetic or understandable in any way, shape or form. Daniel Wu (Geostorm) had a small supporting role in the picture and, while he had some neat moments, his character was also forgotten in the third act. Wu has already starred in one video game movie – Warcraft. Kristin Scott Thomas (Darkest Hour, The Party) appeared too with the promise of a bigger role in the sequel (when and if it happens).

In short, Tomb Raider was an entertaining but forgettable film. It didn’t do much for the video game movie genre but didn’t damage it further (if that is even possible) either. 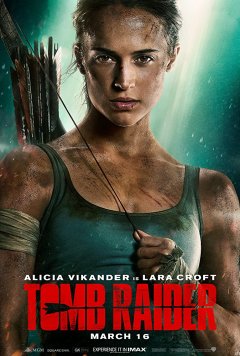