Welcome to a review of a small British film that you haven’t seen. This is The Mercy.

IMDb summary: The incredible story of amateur sailor Donald Crowhurst and his solo attempt to circumnavigate the globe. The struggles he confronted on the journey while his family awaited his return is one of the most enduring mysteries of recent times.

The Mercy was written by Scott Z. Burns (writer of Bourne 3 among other thrillers), based on the real-life events of 1968. I thought that the structure of the writing was fine but I had a lot of problems with its content. If the movie had a more critical rather than a celebratory approach towards its lead, I would have enjoyed The Mercy vastly more.

To begin with, the movie opened with quite a weird set-up. Instead of starting with the development of the main character, the viewer first found out about the actual sailing challenge and the navigation technology. Only then, was the main character and his family somewhat established. Since the movie did not persuade me to like the character in its first act, I cared little to none about him during the subsequent acts, where the viewer’s emotional connection to/understanding of the character were the only things holding the film together.

After half an hour of wonky set-up. the movie really began when Crowhurst set out for his journey. Quickly, a few things were revealed: he was really unprepared and he didn’t really know what he was doing. While his whole journey and this movie were pitched as an inspiring quest of a single man, in truth, his decision for the voyage was an attempt to prove his worth and best other men. Additionally, he wasn’t really looking to inspire others but rather to drive revenue into his business – it was a marketing/publicity stunt more than anything else. When his true intentions came to the surface, it became easier to understand why he was prepared to lie and cheat his way to the finish.

His whole ‘inspirational quest’ was just one giant attempt to cover up a failure and the movie celebratory view of its main character was completely wrong. How could one celebrate a man who would rather die than lose? Who would rather die than return to his family? I do get that the voyage did damage his psychology and that he wasn’t thinking clearly in the end. However, even though the fact that he committed suicide was an unfortunate event that should not have happened, it’s not a good enough excuse or a justification for his earlier actions, the ones prior to the mental illness he suffered onboard. Unless he was mentally ill before he even set out for the journey? Or was he just a sad little man, who believed in the tropes of classical masculinity?

Lastly, the concluding scenes with the wife’s decision to blame everyone else seemed like a cheap trick. Ultimately, it was his decision to sail away! Moreover, he was the one who created the circumstances that would push him to sail away! It was all on him!

The Mercy was directed by James Marsh (of The Theory of Everything). I don’t think he nailed the direction for this film. As evident in the previous section, I had lots of problems with the writing and this movie’s perspective on this story. A lot of that came from Marsh’s directing. Also, the movie was incredibly slow and not intense enough to make up for the lacking pace. The scenes of being stranded at sea were few and far between and they were not constructed in a particularly compelling manner – this was no In The Heart Of The Sea (didn’t have the same visuals) and wasn’t deep and thoughtful enough to succeed without them.

Colin Firth (Kingsman 1, Kingsman 2, Genius, Magic in the Moonlight) played the lead of Donald Crowhurst, and while he was okay, I didn’t think his performance was powerful enough. He certainly did not make me like or even understand Crowhurst’s motives and actions. Rachel Weisz (The Lobster) was fine as Clare Crowhurst but it was quite sad to see her relegated to the ‘wife at home’ role. David Thewlis (Wonder Woman) was good as the journalist/publicist Rodney Hallworth – his character was the only truly interesting part of the film.

In short, The Mercy wasn’t a great film as you can tell from my ‘less than merciful’ review of it. 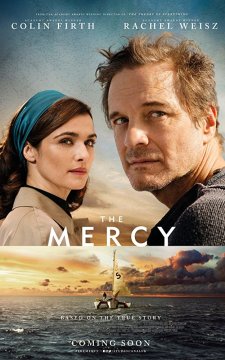