Welcome to a review of a movie you have never heard of. I only really find out about it when I was buying a ticket to its screening. This is Basmati Blues.

IMDb summary: A brilliant scientist is plucked out of the company lab and sent to India to sell the genetically modified rice she created – which she doesn’t realize will destroy the farmers she thinks she’s helping.

Basmati Blues was written by Dan Baron (who also directed the film), Jeff Dorchen, and Danny Thompson. These filmmakers either don’t have anything else or anything worthy of note on their IMDb pages. Also, they have made this movie back in 2012-2013 and it has been kept from release for 5 years (definitely for a reason(s)). Even now, it has only been released in a handful of countries (either in the cinema or on DVD). I think that the US premiere date is still a couple of months away and even when the picture does come out, there won’t be any advertising for it. So, how bad is it?

Basmati Blues has been justified online as Hollywood’s homage to Bollywood. That justification was an answer to the critique that the movie was just appropriating the culture of India. Whether that was truly the case, I’m not entirely sure. The film seemed to be a somewhat collaborative project between the East and the West (based on a mixture of English and Hindu names in the credits), while the familiar Bollywood traits – songs, dances, bright colors, slapstick humor – seemed to have been celebrated in this picture. Nevertheless, the movie’s lead and the villain were white. The shades of the white savior narrative were present too (at least the said saviour wasn’t male so maybe that’s better? It isn’t). The idea that farmers in India would be so trusting of a Western corporation was just plain stupid. People from the East have little reason to trust the West and, if the West still doesn’t get why, we are gonna be stuck in the current global relations for a long time.

Anyways, even if you divorce the content of the film from its context, it still had problems. The fact that it was sort of a musical about science (at least in the beginning) seemed like a bizarre combo. The villain was so cartoonish – his whole evil corporation belonged in a Sunday morning animation (and he wasn’t cartoonish in a right way for the performance to be seen as a parody). The main character was annoying too – she seemed to be highly intelligent in the lab but clueless about the world, the different cultures, and just life in general. The love story aspect was cliche, cheesy, and predictable (really Hollywood-y). I guess at least from the structural point of view, the film was well-written as the plot ideas that were introduced during the first act, did come back in the third (the horse, the monkey seeds).

Basmati Blues looked okay. The views of India were nice, but then again, I could have watched a documentary to see more of them. A lot of noticeable green screens were used for musical numbers. The numbers themselves were fine. The songs weren’t that catchy and I wanted to see more choreographed dances. Again, I should probably watch a true Bollywood film rather than a Hollywood knockoff to see the things that were lacking here. Genre-wise, Basmati Blues have been classified as a comedy and while it certainly had intentional moments of humor, I was mostly laughing at the unintentional ones (which is both bad and good).

One person who wishes this film would never come out is Brie Larson, who played the lead. She wasn’t awful in the movie but she also wasn’t great. Her performance here is a far cry from her outing in Room (for which she won an Oscar) and I don’t think that it comes close to her other films either, like Free Fire, The Glass Castle or even Kong.

Somebody who should be even more ashamed of their work on this movie is Donald Sutherland, who was literally a cartoon villain. He recently played a very distinct villain in The Hunger Games but in that franchise, he had a layer of menace and sophistication. I don’t know what he was going for in this film.

The two romantic leads (cause, of course, there had to a love triangle) were played by Utkarsh Ambudkar (TV actor) and Saahil Sehgal. Both of them were as good as the script allowed them to be.

In short, Basmati Blues was either Hollywood’s homage to or appropriation of Bollywood. No matter which side of that argument you stand on, I think we can all agree that the final project wasn’t great. And yet, if you are somebody who can enjoy a movie ironically, you might find Basmati Blue hilarious, absurd, or both. 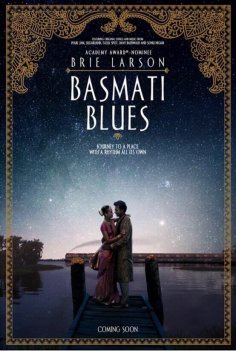