A delightful bundle of joy has landed in theatres. It’s Paddington 2!

IMDb summary: Paddington, now happily settled with the Brown family and a popular member of the local community, picks up a series of odd jobs to buy the perfect present for his Aunt Lucy’s 100th birthday, only for the gift to be stolen.

Movie over Winnie-the-Pooh, there is a new bear in town! Christopher Robin and his bear first entered the pop culture in the 1920s (Goodbye Christopher Robin tells that story), while Paddington first debuted in Michael Bond’s children’s books in the late 1950s. In 2014, Paddington’s stories have been brought to life on the big screen for the first time (they have previously been adapted into TV movies throughout the second half of the 20th century). Due to the critical and commercial success of the first film, the sequel has been made and the world is just a tiny bit better because of it.

Paddington 2 was written by the director of the film Paul King (who also helmed the first film) and Simon Farnaby (actor-turned-writer). The writing for the picture was just great. The viewers got to see Paddington entering the workforce and coming face to face with the harsh realities of life, while never losing his optimism. Despite all challenges he had to face, the lovable bear remained an example of endless hope, understanding, and kindness – somebody that we should all strive to be a little more like. The innocent humor, which arose from the situations that Paddington put himself in, was so nice and a pleasant change from the fart jokes of the other children’s movies. The meta-humor – the joke about the actors being evil as they lie for a living – was appreciated too. The good side of the British culture, that was neatly spotlighted in the first film, was on display here too. I also liked the fact that the movie wasn’t afraid to poke fun at the poshness of Britishness too. Also, I loved the fact that the incentive for a story was a pop-up book – I used to love my fairytale garden pop up book as a child and it is still on the shelve in my old room at my parents’ house.

Not only did Paddington got a chance to go on a fun adventure in a sequel, but his family also got some nice screentime. The teenager problems, the middle-life crisis storyline for the dad, and the desire for adventure for the mother were all nice touches that expanded the plot. I also loved how tight the narrative was. Every detail that was introduced in the set-up came back again during the third act of the film. The son’s steam trains hobby, the dad’s yoga, the sticky toffee apples that Paddington ate during the fair, the judge character, the daughter’s newspaper, the mother’s painting and swimming abilities, Paddington’s folded ladder were all important plot-points, not just random ideas that the screenwriters had.

The director of the first film Paul King absolutely nailed the sequel. He kept the pure, innocent, and joyful atmosphere of the first movie that is so on-brand for Paddington. The picture’s setting was very well-realized: both the broad one (the feature was sort of a love letter to London) and the narrow one (the fair/carnival/circus setting was just adorable). The CGI animation that brought Paddington to life was impeccable too. The cinematography was amazing as well: the filmmakers used a lot of long and mobile shots that were so impressive.

Ben Whishaw (A Hologram for the King, In The Heart of The Sea, Spectre, The Danish Girl, Suffragette, The Lobster) was, once again, perfect as the optimistic, innocent, but determined voice behind Paddington. Hugh Bonneville (Breathe), Sally Hawkins (Godzilla), and Julie Walters (I can’t wait for Mamma Mia 2!) were great as the ‘adoptive’ family of Paddington, while Brendan Gleeson (Assasin’s Creed) had a lot of fun with the role of the prison cook. Hugh Grant (Florence Foster Jenkins) was wonderful as the over-the-top theatrical villain, while a plethora of great British actors (Jim Broadbent, Peter Capaldi, Ben Miller) also played some lovely minor roles.

In short, Paddington 2 provides an amazing opportunity for escapism and is both heartbreaking and heartwarming. It also will get you craving for marmalade! 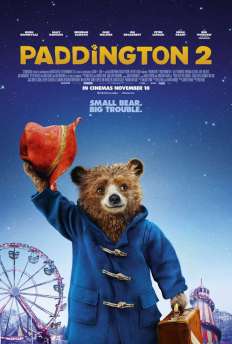