What a time to be a nerd! A new Marvel movie is in theatres every 4 months! Is this heaven or what? Without further ado, let’s discuss Thor: Ragnarok!

IMDb summary: Imprisoned, the mighty Thor finds himself in a lethal gladiatorial contest against the Hulk, his former ally. Thor must fight for survival and race against time to prevent the all-powerful Hela from destroying his home and the Asgardian civilization.

If it wasn’t obvious from my intro, I’m a huge MCU fan and have reviewed quite a few films of the franchise, thus, I’m linking the said reviews here: Captain America 1+2, Ant-Man, Guardians 1 and Guardians 2, Avengers 2, Civil War, Doctor Strange, Spider-Man: Homecoming.

This review is SPOILER FREE. The discussion involving SPOILERS is located at the end of the page.

Thor: Ragnarok was written by Eric Pearson (writer of a few MCU one-shots (I wish they were still making them) and writer on Agent Carter), Craig Kyle (comic book writer, producer the first two Thorfilms and of some of Marvel’s direct-to-video animated pictures), and Christopher Yost (longtime collaborator of Kyle, writer of Thor: The Dark World). I loved the writing for this film.

To begin with, I appreciated how dense the narrative was. So much happened in this picture and every second of that 2-hour runtime was packed with plot. It felt like this movie consisted of a couple of films, which was exactly the case. Thor: Ragnarok contained the first third of a Hulk solo movie – the middle part and the ending will probably be folded into Avengers 3and 4. I was a bit worried that the Hulk sideline will feel tacked-on but it didn’t – Bruce Banner and his green friend fit into this picture organically. I loved the fact that we got to see more of Hulk and find out about his own separate personality.

In general, the majority of the main characters had very satisfying character arcs. First of all, Thor went on a journey on finding his path again, while Valkyrie also had to re-find her purpose in life (I loved how she was both badass and had her flaws). Loki attempted to redeem himself in the most questionable and Loki-appropriate way possible and Heimdall got to do something meaningful for once in these films. Skurge’s questioning of morality was great, while Grandmaster’s hijinks were hilarious.

Speaking of the comedy in the film – it was just wonderful. The situational relatable humor, the reactions, the call-backs, the references, and the jabs at the previous MCU events were extremely funny. However, the film also had some heart to it. One particularly touching moment occurred in Norway at the beginning of the film. That scene’s location – Norway – was also a neat nod to the Norse mythology roots of these characters.

MCU films have been notorious for their lack of great villains. I didn’t think that Hela followed this trend. She was both memorable and menacing. I also loved how she had a family connection to the protagonist, and, thus, how the film got an opportunity to explore the notions of family and home. I also enjoyed seeing her be actually threatening, setting the stakes high and having a lasting impact on both Thor and Asgard (physical and emotional).

Thor: Ragnarok was directed by the incredible filmmaker from New Zealand – Taika Waititi. I was only introduced to his work last year with the awards’ nominated delightful and heartfelt comedy Hunt for the Wilderpeople. Before going to see Ragnarok, I also watched his brilliant vampire mockumentary What We Do in the Shadows. Needless to say, my expectations were high and I’m so glad to say that Waititi delivered on them 100%! Thor: Ragnarok had the heartwarming feeling of Spider-Man: Homecoming, the jokes of Guardians of the Galaxy, and the trippy visuals of Doctor Strange. Nevertheless, it wasn’t just a rehashing of elements from other films, but a refreshing, unique, and immensely entertaining take on them.

The color palette of Thor 3 was just so gorgeous and super vibrant. The location and the character designs have never looked better in a Thor film (the looks reminded me of a mixture of Star Wars, Star Trek, Lord of the Rings and just 1980s style). The action was just so dynamic and energetic. It was also varied: we got to see a couple of one-on-one fights as well as some epic scale battles and a few spaceship chases. One of my favorite action pieces was the short opening fight between Thor/Loki/Hela in the rainbow bridge. Not on it, but in its stream. The music (by Mark Mothersbaugh) was also nicely incorporated into the film. I’m gonna listen to that Led Zeppelin song every day at the gym now.

In short, Thor: Ragnarok was without a doubt the best Thor film but it also might be one of the best MCU solo films ever! Not only worthy of watching once, but repeated viewing is recommended! 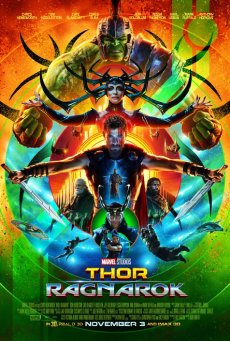 Since I saw the movie super early (thanks, UK release schedule), I didn’t want to talk about spoiler stuff in the main part of the review, so I’ll just unpack some ideas in more detail here: