IMDb summary: When the network of satellites designed to control the global climate start to attack Earth, it’s a race against the clock to uncover the real threat before a worldwide geostorm wipes out everything and everyone.

Geostorm was written by the director of the film Dean Devlin (he is a longtime producer) and Paul Guyot (a TV writer). Usually, movies like this one have a whole army of writers, so I was actually quite surprised to see only 2 writing credits for this one). The picture’s writing was exactly of the quality that I expected it to be, while the story was predictable, typical, and full of far-fetched science (again, as it was supposed to be). It also had the most cliched lead – a family man with a broken family (father-daughter AND sibling issues).

The best part about the writing was the interplay between the movie’s messages and the current political climate.  To begin with, the whole movie was basically an awareness campaign for climate change – a development that some (you know who) still think is a hoax. Like all disaster films, the movie also showed the people trying to control or fight nature, while we should have left it alone long ago.

The more obvious political message, or the anti-political one, was the portrayal of the film’s villain (who had that ‘Make America Great Again’ attitude) and the anti-weaponization idea (I suppose that by the anti-political tone I also kinda mean if not ‘anti’ then at least un-American tone too). And yet, even though the film was made for an international market and had an international cast, it still had a typical American hero front and center. China, being the box office power it is, also was spotlighted a bit. Basically, Geostorm seemed like an old school/90s very typically American (but also somewhat un-American) film disguised as a ‘dumb’ actioner for the foreign audiences.

Speaking of the ‘happy’ (millions died, don’t mention it) ending of the film: I, as a realist and a cynic, generally have a hard time stomaching the positivistic happy endings, which are all about the single humanity, solidarity, peace and bright future. I, honestly, stopped believing in that dream long ago and nothing that’s happening in the world today is work towards persuading me otherwise. Well, at least the movies try.

Independence Day films’ producer Dean Devlin had his directorial debut with Geostorm. I guess he did as good of a job as this genre requires of him. The action was fine, the story made sense in the context of the film (suspension of disbelief is key). The effects were okay. Some of them looked like they belonged in the 1990s, the others in the 2010s. The space stuff looked best, but the weather catastrophes looked kinda awful and very obviously CGI. It was basically a remake of 2012 movie for 2017.

Gerard Butler starred as the lead and did an okay job. This is the type of movie that he usually makes but I don’t really know why executives still cast him because he is no longer a box office draw. Also, even though I buy him as an action hero, don’t push your luck and make him a scientist too. That’s a bit harder to comprehend. Lastly, why is he always made into an American (or an Egyptian character)? Can’t we hear his actual Scottish accent just once?

The supporting cast of the film included Jim Sturgess (whose performance I did enjoy. I’m also more inclined to give him a pass as he has starred in one of my favorites movies of all time – Cloud Atlas – and also had a role in Stonehearst Asylum); Abbie Cornish; Ed Harris (mother!, also, please, shoot more Westworld ASAP), and Andy García (a Cuban-American actor in the role of the President: should I read into this?). The film also had a bunch of international actors whose character’s only character trait was their nationality (that’s not how you do diversity, Geostorm). The film starred Germany’s Alexandra Maria Lara, Ireland’s Robert Sheehan, Hong Kong’s Daniel Wu (Warcraft), Mexico’s Eugenio Derbez, Adepero Oduye of Nigerian ancestry and Egypt’s Amr Waked in a role of a Frenchman. Also, Zazie Beetz, who will play Domino in Deadpool 2, had a minor role.

In short, Geostorm was exactly what you would expect it to be. I didn’t expect nothing, so the movie was also nothing. 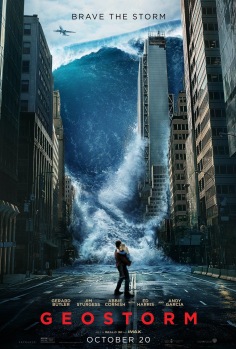