After being pushed back a few years, Tulip Fever has finally reached theaters! Does it have any Oscar potential as its cast list suggests?

IMDb summary: An artist falls for a young married woman while he’s commissioned to paint her portrait during the Tulip mania of 17th century Amsterdam.

Tulip Fever was written by a playwright and occasional screenwriter Tom Stoppard. His most recent previous film script was the one for 2012’s Anna Karenina. The film’s story and the writing, in general, started out promising but quickly wasted all the said promise. The opening, which set the context of the tulip market and the 17th Amsterdam, as well as the initial details of the actual plot, was quite interesting. However, the more the narrative unraveled, the more unbelievable it became. The ending was especially unsatisfying because the movie didn’t commit to going the full on fantasy route and having a fairytale ending but also wasn’t grounded enough for a realistic conclusion, so it just had one that landed somewhere in the middle. All the characters in the picture were way too interconnected and the twists and turns in the story were mostly lucky coincidences. The drama and the emotional core felt really fake and manufactured as well. Basically, Tulip Fever felt as an old school literary adaptation, which it was exactly: a contemporary yet classical historical romance novel (by Deborah Moggach) with typical yet modernized characters that was turned into a film.

While the final product did not turn out well, as I have said, the promise was there in the details. It was really interesting to see the love and the lack of love juxtaposed through sex scenes. I also liked the exploration of the women’s roles in a patriarchal system and how cunning they had to be to survive, and yet, how they also felt bounded by their duty (Vikander’s character was never entirely sure about her actions) I also appreciated the portrayal of Christoph Waltz’s character – a clueless man, living in privilege, and not even understanding his privilege yet not being malevolent about it. I also liked the hints at the concept of friendship and the hardships it has to endure when spanning multiple caste levels. Lastly, I was really glad to see a historical drama focusing not on The British Empire but on the player that preceded it in the world domination – Holland/The Netherlands.

Justin Chadwick, who has received some recognition a few years back for Mandela: Long Walk to Freedom, directed Tulip Fever and did a fabulous job with a flawed script. While he went along with the over the top dramatization of the story, nothing bad can be said about his visuals. Tulip Fever was a gorgeous looking movie, with beautiful and rich shots, full of textures and colors. The costume department should also get a raise because their spectacular collars contributed a lot to the magnificence of the look and helped prove the point that Holland was a powerful country. The artistic close-ups of Vikander reminded me of a fashion film or a high-end makeup ad too. If a movie career doesn’t work out for Chadwick, he should check out the advertising business.

Tulip Fever had a stellar cast, full of Academy favorites, old (Judi Dench, Christoph Waltz) and new (Alicia Vikander). Vikander (The Man From U.N.C.L.E., The Danish Girl, Jason Bourne, The Testament of Youth, Anna Karenina) did a fabulous job and she and Waltz (Spectre, Tarzan) made an interesting pair. Their more formal scenes had a feeling of warmness and respect, while their more intimate scenes felt very uncomfortable (which was the goal). In turn, Vikander’s and Dane Deehan’s (Valerian) scenes felt realistically intimate (sexier than Fifty Shades, though, that’s a low bar to be aiming for). BTW, I bought Deehan much more as a struggling lovesick artist than an action hero.

In short, Tulip Fever was a beautiful looking but a poorly written picture that had some stellar and wasted acting performances too. 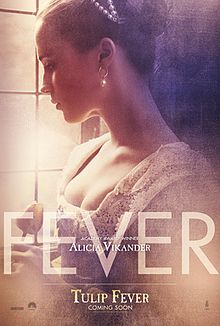