Steven Soderbergh is back from retirement but the audiences don;t care much. This is Logan Lucky!

IMDb summary: Two brothers attempt to pull off a heist during a NASCAR race in North Carolina.

Logan Lucky was written by Rebecca Blunt – either a newcomer writer or somebody, working under a pseudonym. There has been speculation online that Blunt lives the UK, while some critics thought that Soderberg himself is hiding underneath that name (because he does that when crediting himself as a cinematographer (as Peter Andrews) and editor (as Mary Ann Bernard). Anyways, whoever this Blunt person is/was, they did a good job on the script. While the core narrative was quite familiar (Hell or High Water-esque – stealing for one’s family), its execution in details was brilliant.

The movie opened with a good set-up of the mundane lives of its characters and established them as people, whose lives did not turn out the way they planned (one of them peaked in high school, the other was suffering from the little brother inferiority complex).

Then, Logan Lucky moved on to showcasing the American culture (the kind that foreign people wouldn’t even dare to call culture), which consisted of children beauty pageants and rural county fairs. However, the star of the said culture and the film was NASCAR – a very American brand of motor-racing. The cherry on top was the prolonged anthem scene. Logan Lucky seemed to be driving home a message, that stuff like this, for better or for worse, happens only in the USA. This type of portrayal could have easily come across as annoying but the underlying sense of irony and satire made it work.

Speaking about the comedic side of Logan Lucky – it was great if not as extensive as I hoped, after watching the trailer. I loved the different pairings of the criminals (The Hitman’s Bodyguard–esque) as well as the jokes that were central to the characters (one-handed bartender, the dumb brothers of Joe Bang). Logan Lucky also had a really funny sequence with Sebastian Stan’s driver character (who didn’t seem like he had much to do with the actual plot of the film). Another magnificent and hilarious sequence was the prison riot and the prisoners demanding all GRRM books, getting frustrated that ‘The Winds of Winter’ has yet to be released, and hating the fact that the TV show is going off books. The ‘explosive device’ sequence and the decision to stop midway and explain the chemistry were extremely funny too.

Logan Lucky also had a surprising and really heartfelt scene involving the main character’s daughter’s beauty pageant and the song ‘Take Me Home, Country Roads’ (by John Denver). That scene should have been the closing images of the picture. However, Logan Lucky did continue and had a concluding detective story that felt like an afterthought. The investigation itself was not that interesting or neccesary. However, that closing sequence did provide some revelations about the main character’s secret dealings and did have a nice ending (well, for now) with all of them sitting in a bar.

Steven Soderbergh (The Ocean’s trilogy, Magic Mike series, Haywire) did a good job with Logan Lucky but I don’t think that this was his best film. The pacing at the start was a bit slow, however, the movie did pick up its pace, when the action began. However, it started dragging again with that detective-story afterthought. What I appreciated the most about Logan Lucky (and the other films by Soderbergh) was that it felt real. Not necessarily realistic but real, grounded, self-aware, and sprinkled with irony. While the scripts that he directs (or even writes) are usually mainstream, Soderbergh addresses them with unique auteur/indie perspective.

This time around, Soderbergh also approached the distribution of the film uniquely and decided not to partner with any of the big studios. Well, that backfired. Big time. Logan Lucky didn’t win its weekend, nor it showed any staying power by dipping lower and lower in the TOP 10. I really want to know who/what is to blame. Are the audiences just not interested in Soderbergh’s work anymore? Was it the lack of advertisement? Where were all the NASCAR fans? Where were all the grown-up Pixar’s Cars fan (the ones who saw the 2006 film as children and are now adults)? Where were the fans of movies, involving cars, a la Baby Driver?

Logan Lucky had a really strong cast, lead by a new favorite of Soderbergh’s – Changing Tatum (they worked together on Magic Mike, while the other recent Tatum’s films include Hail, Caesar!, The Hateful Eight, Jupiter Ascending, Jump Street). His brother was played by Adam Driver, who is constantly working on smaller, more art-house pictures in between his Star Wars gigs, like Midnight Special, Silence, and Paterson. Daniel Craig (Spectre) also had a very fun role in the film that he seemed to be having a blast while playing. He never appeared to enjoy being Bond that much and, yet, he still signed on to continue being the 007.

The supporting cast included Riley Keough (Mad Max), Katie Holmes, Katherine Waterston (Fantastic Beasts), and Hilary Swank (would love to see her going back to the Million Dollar Baby type of projects and the level of success). The majority of them didn’t really play real characters but were used as devices for world-building or the lead’s character development. Seth MacFarlane (Ted, Sing) and Sebastian Stan (Marvel stuff, The Martian) also had cameo roles and their whole separate thing going on in the background.

In short, Logan Lucky was an enjoyable mixture of mainstream and indie, but it didn’t offer anything too special. Neither a disappointment nor really a win for Soderbergh. 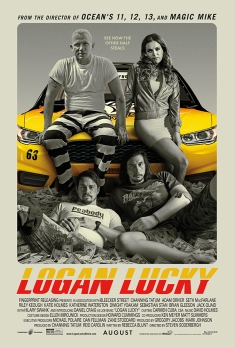