The Captain Fantastic-esque movie for this awards’ season – The Glass Castle – has reached theatres, so let’s see if it is as good as its predecessor.

IMDb summary: A young girl comes of age in a dysfunctional family of nonconformist nomads with a mother who’s an eccentric artist and an alcoholic father who would stir the children’s imagination with hope as a distraction to their poverty.

The Glass Castle’s script was written by the director of the picture Destin Daniel Cretton, Andrew Lanham (who wrote the 2017 religious pic The Shack), and Marti Noxon (writer on Buffy and To The Bone). It was based on the memoir of the same name by Jeannette Walls (who was played in the film by Brie Larson). The writing for the film was interesting – it had some great moments but a few flaws too. First, the narrative simultaneously unraveled in two temporal lines, past and present, and these two were connected well-enough. However, the story itself was a bit too long – there were differently quite a few moments which could have been cut and made the plot more tight and streamlined. Nevertheless, the fact that the story was so long and drawn out kinda helped to build a strong emotional core of the film.

The Glass Castle had the Interstellar syndrome of focusing on a single child’s relationship with the parents and kinda letting the other children fade into the background (but, I guess, since the movie was based on one person’s memoir, it’s okay for the film to also have a more centered focus). Thematically, the movie tackled a lot of issues. The most obvious one was the less-than-conventional lifestyle of the family (and this were the Captain Fantastic similarity came in, although, CF was more about living unconventionally, while this one was more about just living in poverty). It was depicted quite well and with enough detail. The second topic was the parent-child relationship. That discussion had the ultimate message that parents need to respect their children’s life choices, even if they might do something different in their place (at least that was my takeaway).

The third issue was the abuse in the family. This problem was depicted in both The Walls’ family and the father’s family. The first recreation of the issue (in The Walls family) was way more well-rounded, while the abuse in the father’s own family (abuse of the mother/grandma) was only just glanced at, which was the biggest flaw in the film. If that was definitely the case of pedophilia, the movie should have looked at it much more. If it wasn’t the case, all the speculations needed to be cleared out way more overtly. Lastly, The Glass Castle also presented an alcoholic character and had one of the best and most accurate representations of the issue. The withdrawal scene, as well as the irrational need for a drink, were very realistic inclusions.

While The Glass Castle did a fairly good job of presenting a variety of issues and topics, I wish it were more critical of them. I saw this being the main complaint in the reviews of the various critics and I completely agree with them. The end of the picture was mostly sugar-coated and very Hollywood-y. While forgiveness is a powerful tool to have, an ability to stand for one’s own beliefs and to cut toxic people from one’s life, no matter how close to them one used to be, are also important life lessons that I wish the film would have added.

Destin Daniel Cretton, who has previously mostly worked on short films and documentaries, directed The Glass Castle as his 3rd feature film. The pacing of the movie was really slow, and while the emotional connection between the viewer and the characters was quite successfully built, the narrative itself did drag and got too repetitive at times. The cinematography was good, very classic, drama-style one. The director also did a good job of working with the actors and pulling amazing performances out of them.

The two stand-outs from the cast were Brie Larson (Room, Kong, Free Fire) and Woody Harrelson (Triple 9, Now You See Me 1+2, War For The Planet Of The Apes). Larson has actually previously worked with this director and her involvement in his film post-Oscar win, kinda raised the movie’s profile. Anyway, Larson, once again, proved that she deserved that last Oscar that she won and I hope to see her standing on the Academy stage once more in the future. Harrelson also nailed his role. This time around his performance as an alcoholic was even more believable than in The Hunger Games. Other supporting cast members included Divergent’s Naomi Watts (she was amazing as the eccentric artist mother) and Sarah Shook (Steve Jobs), Josh Caras, and Brigette Lundy-Paine as Jeannette’s siblings. New Girl‘s Max Greenfield also had a fun role, while Ella Anderson did a very good job as the younger version of Jeannette.

In short, The Glass Castle is an interesting biopic that should have analyzed rather than just depicted its source material. The acting is top-notch, though. 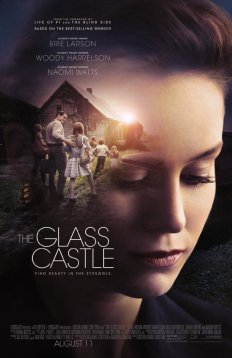