Let’s take a break from all the summer blockbusters of varying quality and give a chance to the dying genre of the regular movie. This is the review of Wind River.

IMDb summary: An FBI agent teams with a town’s veteran game tracker to investigate a murder that occurred on a Native American reservation.

Wind River is a thriller, written and directed by Taylor Sheridan. Sheridan’s name might be unfamiliar to a lot of people, but cinephiles should know him for writing two recent marvelous pictures that both had some awards potential – 2015’s Sicario and 2016’s Hell or High Water. While Sheridan didn’t direct any of his previous scripts (Sicario was done by Villeneuve, and Hell or High Water by Mckenzie), he does have some directing experience, having helmed 2011’s horror film, Vile. Wind River is being distributed by the awards whisperers The Weinstein Company. Their involvement combined with Sheridan’s previous track record might actually give Wind River a chance to make some ways during the proper awards season. More importantly, the film highly deserves that.

Sheridan, similarly to his previous movies, has written a story that’s both thrilling and entertaining but is also thematically clever. Wind River, a film inspired by true events, is set on a Native American reservoir and the first victim of a crime is a young Native American woman. The local police are not equipped to solve the mystery, while FBI is also not willing to pay a lot of attention. This fictionalized account goes very much in line with the real life events (so, ‘inspired by true events’ sentence is accurate). As an anthropology student, I have studied a few cases of Native American women going missing in the north of North America and the local authorities doing nothing to find them (in class, we mostly focused on cases in Canada but the film’s Wyoming’s case was very similar). Wind River’s story at least had a somewhat happy ending and some closure, however, that’s usually not the case in real life. So, it was really nice for a film to end with a sentence about the statistics of missing Native women –  a call to action, even if it will probably go unheard.

The depictions of the reservoir life seemed quite accurate. The problems within a Native American community – the drugs and substance abuse, poverty, the loss of identity and the marginalization – were all mentioned. The relationship between the white Americans and the Native Americans was represented in a variety of ways. The viewers saw both a friendly relationship of a white man being, more or less, a member of a community and an outsider white American being seen as a hostile stranger (at least in the beginning). Lastly, even though some of the ideas and relationships in the film could be seen as very specific and having a limited crossover, the overarching themes of the picture were survival and family – two extremely universal concepts that are understood across all cultures.

I have mentioned the historical facts as well as topics of the movie, let’s now turn our attention to the actual detective story. To begin with, I found it refreshing to see an FBI agent and a local hunter working together and listening to one another, rather than competing to reach the same goal. It was also nice to see a completely professional relationship without any pushed romance being depicted. The reveal of who the criminals were – 5 white, less than bright, drunk men from a working class background – was maybe a bit disappointing at first but, on a second viewing, very much grounded and realistic. Plus, the scene that followed the reveal – the rapid shoot-out – was unexpected in the best way possible and also oddly satisfying.

While Sheridan’s directing style wasn’t groundbreaking, it was still good in its subtlety. His direction for the picture was mostly elevated by his own amazing writing. Visually, the film looked nice – the sweeping shots of the mountains and snow were naturally gorgeous, while the sequence of the snowmobile action added an element of effortless coolness. The pacing was very good too – the film was constantly building to a crescendo and also delivered on it. Wind River was definitely a great effort from a sort of new director.

At the center of Wind River, two Marvel stars were reunited – Jeremy Renner and Elizabeth Olsen. They both did a magnificent job. It was nice to see Renner continuing his indie/awards career alongside his blockbuster-focused one (he was just recently in Arrival in addition to Civil War, MI5, and Age of Ultron). Elizabeth Olsen (Godzilla) has really come into her own as an actress and is probably now more famous (acting-wise) than her older sisters.

The supporting cast, thankfully, provided an opportunity for some Native American/First Nations talent to shine, like Gil Birmingham (he was also in Hell or High Water), Julia Jones, Graham Greene, and Martin Sensmeier. Jon Bernthal (Baby Driver, The Accountant, We Are Your Friends) also appeared in the film, reuniting with Sheridan, after having worked on Sicario with him.

In short, Wind River is an emotional, smart, and entertaining thriller that deserves more recognition that it will probably get. 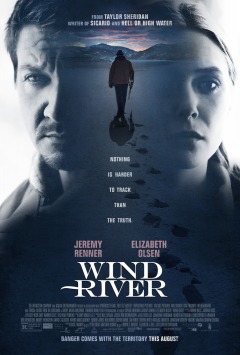