Accidentally, this week my blog has a theme – alternative (not DC or Marvel) comic book movies. On Tuesday, I reviewed Valerian (based on a French comic book) and today, we are talking about Atomic Blonde!

IMDb summary: An undercover MI6 agent is sent to Berlin during the Cold War to investigate the murder of a fellow agent and recover a missing list of double agents.

The movie Atomic Blonde is based on a 2012 graphic novel ‘The Coldest City’ by Antony Johnston and Sam Hart. The screenwriter Kurt Johnstad (writer of the 300 movies) was the one who adapted this property. It was actually quite refreshing to see a film written by a single person rather than a group of screenwriters of varying experiences. And yet, the writing was still a mixed bag. I loved the main narrative and its structure – the story was presented in a flashback with the verbal exposition being given in an interrogation room. So, the plot was both told and shown. The set-up for the story and the decision to start it from almost the very end also helped to establish the main character. In the first seconds of her appearance, we realized her occupation, her relationships, and her vulnerabilities.

The spy-world was also well realized, with some of its details being quite fascinating. I loved how the film spotlighted the way spies deal with their lives, both physically and emotionally (ice baths, drinking, smoking). The historical tie-ins – the TV announcements about the state of Berlin Wall – were cool too and help to ground the movie. The ideas of spies deceiving each other and always having multiple ulterior motives were quite neat as well.

My few gripes with the film were a single logical flaw and the conclusion of the story. The thing that didn’t make much sense was the fact that James McAvoy’s character was trusted by others when he was obviously acting shady. Plus, the picture’s motto was ‘Never Trust Anyone’, so the fact that the characters turned a blind eye to his deceptions was kinda dumb. Secondly, the film’s story had a lot of twists and turns at the end, which were really heavily piled one on top of another. I wish that these reveals would have been given earlier or handled in different a way because it felt like the movie had multiple endings and didn’t know when to stop.

The longtime stunt coordinator, stuntman, and fight choreographer who recently transitioned into directing – David Leitch – helmed Atomic Blonde. His previous directing credits include the first John Wick (with Chad Stahelski), while his upcoming project is the Deadpool sequel. Not surprisingly, Atomic Blonde has been nicknamed online as the female version of John Wick and, while the comparison is valid, Atomic Blonde is also very much its own thing. It has its own cool action scenes, which were choreographed superbly and showcased fighters using a lot of everyday props rather than guns. The way these fight scenes were modified for someone, who is physically weaker (a female body) was interesting too. I also loved the car chases with all the old, now vintage, cars (no yellow Fast&Furious Lamborghinis here).

The overall tone of Atomic Blonde was also really cool. I’d describe it as gritty glamor. The gritty part comes from the bloody action and the truthful depiction of the life of spies. The glamor could be seen in the costumes and the hairstyle of its lead – Charlize Theron had an impeccable look with her long, classic coats and platinum blonde hair. The cool color pallet added to the glamor too. The punk influences of 1989/1990s Berlin (the combo of grit and glamor) were also felt in the movie, from the locations of the underground clubs to the visuals of the graffiti on the wall. The soundtrack of the picture also emerged up from this general feel and tone. The composer of John Wick and Guardians of the Galaxy films, Tyler Bates, did a great job on the Atomic Blonde score, by mixing together 90s English and German songs as well as their more modern reworkings.

The director Leitch also did a brilliant job of filming the action in a variety of angles. Every trick in the book was used – from long panning shots and zoom ins/outs to close-ups to handheld shots with and without the cuts. That continuous action sequence in the apartment building was especially amazing. Genre wise, Atomic Blonde certainly felt more like a drama/thriller rather than just an action film. Its pacing wasn’t super fast – the movie didn’t really drag (except maybe the ending) but it never got as exciting as it could have been.

All in all, though I had some problems with the directing of the film, I enjoyed it overall and I still think that Leitch can nail Deadpool 2. We all know that he can deliver a magnificent action sequence, I just wonder whether he can do humor and comedy.

Atomic Blonde had quite a stellar cast. Charlize Theron (The Huntsman, Mad Max, FF8, Kubo) was front and center, demanding all the attention for the best reasons. She was amazing in the role, especially in its physical aspects (she did lots of stunts herself). James McAvoy (X-Men) was cool and creepy in his role. His persona in this film felt like just another personality of his character in Split. Sofia Boutella (The Mummy, Star Trek, Kingsman) was also good, though her performance was brief. John Goodman (Kong, Trumbo), Eddie Marsan (Their Finest), and Toby Jones rounded out of the cast.

In short, Atomic Blonde is a very entertaining thriller that has a lot of cool aspects but also some minor flaws. Not a perfect film but definitely worth a watch. 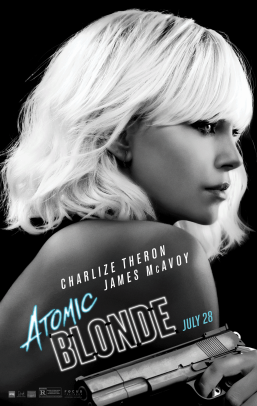