Sorry for not posting for a while but now I am back with a new movie review. This time, we are discussing The Circle.

IMDb summary: A woman lands a dream job at a powerful tech company called the Circle, only to uncover an agenda that will affect the lives of all of the humanity.

The Circle was written by the director James Ponsoldt and the author of the original novel Dave Eggers. Even though Eggers was helping with the adapting process, the usual book to movie changes did occur. The narrative was streamlined and some of the unnecessary plot details were cut out (mainly the extra development for the main character – her interaction with the couple on a boat and her quite uncomfortable relationship with the character of Francis (who does not appear in the film at all). Also, the reveal of John Boyega’s character came sooner in the movie while it was held secret until the end of the book.

Idea-wise, the film was quite fateful, although it did have more gray areas, which I quite liked. My main complaint about the book was that it presented the ideas on privacy and freedom but wasn’t critical of them. The fact that the majority of people were okay with this new world order and didn’t bat an eye about losing their right to chose were two things that were hard to believe. This type of naivety was quite unrealistic and, in turn, annoying. If something sounds too good to be true, it probably is.

The book’s ending, while shocking, was also very much frustrating and solidified the unlikeability of the character (due to her complete naivety). The movie’s main character – Mae – appeared to be more critical of the world she inhabited, and even though there were plenty of moments where the character appeared to have drunk the kool-aid completely, she ultimately chose to fight against it. However, whether she was fighting against the loss of privacy or just against the two heads of The Circle, I don’t know. I wish that would have been made more clear. Additionally, it is important to note that her decision to rebel might have made the film’s ending more stereotypically Hollywood-like, but I thought that it was more interesting than the book’s ending: it still raised the questions of transparency but it also gave a resolution to the story, even if a very uncertain one.

James Ponsoldt, who has previously directed The Spectacular Now, which I quite liked, and The End of The Tour, which I have been meaning to watch for a while, helmed The Circle and did an okay job. The setting and the design of The Circle company was good – not too futuristic and actually believable (in contrast to the ideas). The camera work was fine too – a variety of angles was used. The pacing was solid and the levels of intensity worked too. Overall, the film was not spectacular but I don’t think that Ponsoldt’s directing abilities were in any way to blame.

Emma Watson starred as the main character Mae. While reading the book, I absolutely hated this character but Watson succeeded in making her at least a tiny bit more likable and relatable on screen. I also thought that she made the character’s arc seem believable, as much as she could with the flawed writing. Her performance was not superb but it was an okay follow-up to one of the biggest movies of the year – Beauty and the Beast.

Tom Hanks (Sully, Inferno, Bridge of Spies) starred as one of the heads of The Circle and played a sort of villainous role – that’s not typical of him. However, the match between an actor and a character was actually quite a good one – the character needed to be really charismatic and Hanks as an actor just seems so likable and personable. I loved his reaction to Mae turning against him.  Interestingly, Hanks has already starred in a previous adaptation of one of Eggers’s books – A Hologram for the King.

John Boyega had a small role as his follow-up to Star Wars: The Force Awakens. He didn’t have much to do but he did shine in a few scenes he was in. Later this year, he will also appear in a potential award’s contender – Bigelow’s Detroit. He was also cast in the Pacific Rim franchise.

Karen Gillan also had a little role and was okay. It was nice actually seeing her on screen without all the blue makeup of Nebula (Guardians of the Galaxy). Her next film is the Jumanji remake/sequel.

Boyhood’s Ellar Coltrane and the comedian Patton Oswalt also appeared in the picture and did a fine job. Bill Paxton also had a small role. The Circle was his final appearance on film, may he rest in peace.

In short, The Circle is a good drama that has the potential to kickstart a conversation on the issues it addressed. However, I don’t think that the movie itself did a good enough job on commenting on the said problems that it introduced. 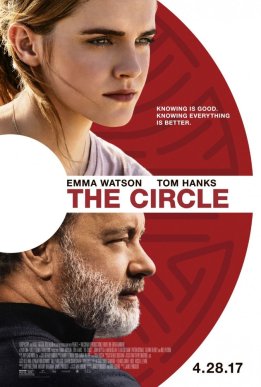 7 thoughts on “Movie review: The Circle”