Welcome to a review of the annual space movie. For the year 2017, it’s Life.

Life follows in the vein of the sci-fi space films, like 2013’s Gravity, 2014’s Interstellar, 2015’s The Martian, and, I guess, 2016’s Passengers. It’s also kinda similar to the earlier pictures, such as 2009’s Moon and 2007’s Sunshine. Life is the most similar to the last one because both films feature diverse groups of astronauts stuck on a space ship and have horror/slasher elements in addition to the sci-fi themes.

IMDb summary: A team of scientists aboard the International Space Station discover a rapidly evolving life form, that caused extinction on Mars, and now threatens the crew and all life on Earth.

Life was written by Rhett Reese and Paul Wernick (the duo previously co-wrote Zombieland and Deadpool). Story wise, the movie was not the most original but the narrative was still interesting and exciting. The two major themes were human intervention and survival. The character development was minimal but there were still a few nice character moments dispersed throughout. In fact, the movie’s main star was the alien – all the set-up focused on it rather than the humans. Life definitely depicted life beyond earth in an old-school way: the creature was instantly violent rather than communicative like the ones in Arrival. Whether the actual alien of this movie was just the rip-off of the Allien, I don’t know. It definitely appeared similar to that one and it was probably a good idea for this film to come out before Allien: Covenant.

In addition to there being some scenes to depict the character’s backgrounds, the picture also had a couple of sequences of the astronauts doing both scientific experiments and publicity for ISS. I really loved those parts and appreciated the fact that the scriptwriters attempted to show a variety of activities done by the astronauts. The ending of the movie was also interesting. I don’t know whether they didn’t explain what actually happened with the pods (how did they switch?) because they are hoping for a sequel or because they wanted to leave it open for speculation/discussion?

The Swedish director Daniel Espinosa directed Life. This was his second US-based picture, but he has also directed Child 44 in the UK (really enjoyed that one) and made a couple of films in both Denmark and Sweden. I quite liked what he did with Life. The visuals were just absolutely gorgeous and not once did I think that we weren’t in the real ISS. The pacing and the intensity were also great. The horror elements of the action weren’t cheesy either and didn’t rely too much on the jump scares but used the technique of suspense building and the visceral imagery to elicit a reaction. In fact, some of the scenes were quite gruesome and uncomfortable to watch but they were effective so I can’t fault a movie for that. The camera work was also pretty impressive, especially one of the early long shots that seemingly went all through the space station. The alien POV was also a neat effect.

The film had a very diverse cast for a narrative reason rather than just for a financial one. The astronauts were played by Jake Gyllenhaal, Rebecca Ferguson, Ryan Reynolds, Hiroyuki Sanada, Ariyon Bakare, and Olga Dihovichnaya.

Seeing Gyllenhaal on screen in yet another movie made me realize that he is one of a few actors who is constantly working. He never seems to fall off the radar even if his pictures don’t earn much. A few of his recent films that I enjoyed are Everest, Southpaw, and, especially, Nocturnal Animals. It was also really nice to see Ferguson in yet another American film (she began her career in Sweden, but has already appeared in MI5, Florence Foster Jenkins, and The Girl on The Train) and I’m excited to continue following her career. For Reynolds, this was his first post-Deadpool film and I think that his role in the marketing campaign for Life was expanded because he is the man behind the Merc with a Mouth. The ad campaign led me to believe that he will be an important part of the picture so I was quite surprised with his character’s story arc.

Sanada, weirdly enough, portrayed a character in Life who very closely resembled his character in Sunshine – a movie which I already mentioned in this review because of its and Life’s similar stories. What a coincidence that these films share an actor too. Bakare has mostly done TV work before now, but he also had cameos in big films like Rogue One and The Dark Knight. Lastly, Dihovichnaya is a newcomer to the Western mainstream cinema but is an established actress in Russian-speaking indie cinema market. I hope that her work in Life will provide her with more opportunities in the West.

In short, Life was a well-made space horror flick. It had a great cast and neat, suspenseful action, which will entertain the majority of the cinema -goers, and an open ending for those who appreciate the intellectual layer in their sci-fi. 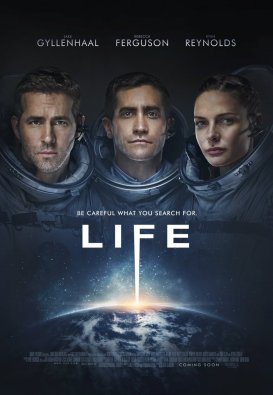