Kong: Skull Island was not a film that I was excited for until I saw its first trailer. That 2-minute preview really got me hyped and raised my expectations. Let’s see if Kong can deliver!

IMDb summary: A team of explorers and soldiers travel to an uncharted island in the Pacific, unaware that they are crossing into the domain of monsters, including the mythic Kong.

Kong: Skull island is the second installment in Legendary’s MonsterVerse franchise, which begun in 2014, with the reboot of Godzilla. Legendary’s MonsterVerse should not be confused with the Universal Monsters series, which also technically begun in 2014 with Dracula Untold and is continuing later this year with The Mummy reboot (although now, that Dracula movie has been dropped from the canon). While I’m all for cinematic universes, I find these two a bit ridiculous. First, they are too similar and are definitely going to blend in the public’s consciousness. Secondly, these properties are good enough on their own – not everything has to be mixed. And yet, I was recently informed that King Kong and Godzilla have already fought against each other in a Japanese film from the 1960s made by Toho. So, is this new shared universe just another Hollywood remake of a foreign property? I, personally, found 2014’s Godzilla to be an okay movie but hopefully, Kong can get me fully on board with this franchise.

Kong: Skull Island was written by Dan Gilroy (wrote The Bourne Legacy and wrote and directed the spectacular indie film Nightcrawler) and Max Borenstein (wrote the new Godzilla). To my mind, the writing for the film was okay: not great but not bad either. As usual, since the monsters were expensive to animate, the viewer got to spend a lot of time with the human characters and yet, the character development was scarce. All of the characters had one major feature that defined them and the said defining trait was sometimes interesting and promising and very cliche in the other instances. The representation of the tribal people of the island was a bit stereotypical and from a definite Western POV (and that’s is a huge no-no for me as an anthropology student).

Story-wise, the movie had a fairly quick and interesting set-up. I liked that the film had a wide variety of characters – the military, the scientists and two leads (Hiddleston and Larson) but, as I have already mentioned, I wish they would have done more with them. The twists and turns in the plot were also fine for the most part, but the narrative did have a few too convenient moments (like the vomiting of the dog tags). The Monster vs. Monster or ‘Let them fight’ idea that begun in Godzilla was also continued here. Kong: Skull Island actually included a surprising variety of monsters: from Kong himself to the big buffalo-like looking animal to the huge spider (felt a bit squeamish watching that scene) to the tentacle monster to the giant ant and, lastly, to the actual skull crawlers.

The film’s setting in the 70s served the purpose of providing some commentary on the issue of war. It was a promising concept and they should have done more with it than they did (the portrayal of the colonel as stubborn and plainly cruel was a bit laughable or at least it played that way). The other overarching topic was man vs. nature – an obvious choice for the monster/survival movies. That whole idea about dropping bombs was really stupid but I also have a feeling that it might have been temporally accurate. The whole ‘What is it? Let’s kill it!’ topic of the movie was also kinda idiotic but also very realistic.

The film had good comedic relief. Some of the jokes landed, some didn’t. One line, in particular, stuck with me. It wasn’t supposed to be funny but it just sounded so ironic in today’s context. I’m, of course, talking about the line ‘there won’t be a more screwed up time in Washington’. Well, how about now?

The picture was helmed by Jordan Vogt-Roberts and this was only his 3rd feature film. His directorial debut was the indie coming of age drama Kings of Summer, which I really enjoyed – I remember it was recommended to me by a friend, who absolutely loved the movie. Bearing in mind that this was only the 3rd picture for the director and the first one of such a massive scale, I think he did an incredible job. While the opening plane crash CGI looked horrible, all of the following CGI of the monsters and the fights was magnificent. I loved the shot of King Kong in a fiery background as well as all the other wide, sweeping shots of the nature of the island. The northern lights also looked neat. The shots from within the helicopter during the first major action sequence were great too. I also thought that Vogt-Roberts had more visuals of Kong than Edwards did of Godzilla. Or maybe they were just dispersed throughout the film more than they were in Godzilla. The old school photo/video visuals were also a nice touch. Lastly, the fact that the first (the sun) and the last (the eye) shots of the picture were similar was also an excellent way to frame the whole thing.

Yes, you read that correctly. The post-credits scenes aren’t unique just to comic book movies. I was the only person in my screening who sat through the 10 minutes of the credits but I wasn’t disappointed that I did. The tease for the future was quite cool and made me wonder whether the actors who appeared in the teaser, will reprise their roles in the future sequels of this shared universe.

Tom Hiddleston as James Conrad. Hiddleston was good in the role even if the role itself wasn’t that great. I mean, his character was just unexplainably good at everything. The most over the top part of his arc was that scene with a sword in a gas cloud – it looked cool but didn’t make much sense and kinda came out of nowhere. I just finished watching Hiddleston in The Night Manger for which he won a Golden Globe. While his acceptance speech wasn’t the greatest, his performance was spectacular, so I’d highly recommend this mini-series. Going forward, he will reprise the role of Loki – arguably, the best villain of MCU – in Thor: Ragnarok.

Brie Larson as Mason Weave. I liked the fact that Larson’s character was a photo-journalist and that they didn’t call much attention to her gender (only in one scene, which should have been cut). Larson herself was good in the role and I’m happy that she is getting more work post her Oscar win (Room). Having said that, the majority of the acting she had to do was basically just reacting to the imaginative things around her. Nevertheless, she did have that one scene of special connection with Kong. What is up with female characters and giant monkeys? Katelyn Snow and Grodd also had a special connection on The Flash.

Samuel L. Jackson as Colonel Packard. Jackson was just recently in another jungle-based movie – The Legend of Tarzan – and I think I liked him more in that one. Here, his performance seemed a bit too much for me. But, I cannot argue that he does know how to play/appear as a menacing villain-ish character.

John C. Reilly as Hank Marlow. Reilly was supposed to be the comic-relief character, based on the trailers and, while he certainly joked around, he was also the exposition machine. Plus, the Jason Mitchell and Shea Whigham duo provided some additional comic relief which was funnier than Reilly’s.

The scientists of the film were played by John Goodman (Trumbo, Patriot’s Day), Jing Tian (The Great Wall), and Corey Hawkins. They served the purposes of their roles well and added some diversity to the cast (the last two). Toby Kebbell (Warcraft, Fan4stic, Ben-Hur) played Jack Chapman and had the emotional character arc of the movie. While I get what the film was aiming for, I didn’t really feel much for Kebbell’s character.

In short, Kong: Skull Island was an entertaining adventure monster movie. The visuals looked amazing and made up for the sorta lackluster script. 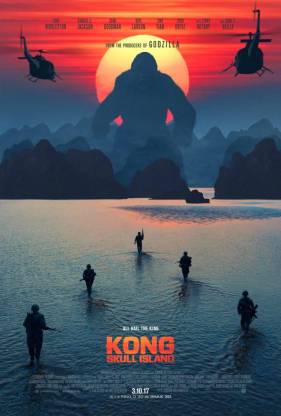