The last (supposedly) Hugh Jackman-lead X-Men movie – Logan – has hit theaters, so, let’s review it! The review is spoiler-free, for the most part. I have written down 8 points, full of spoilers, at the very end and included an additional warning.

IMDb summary: In the near future, a weary Logan cares for an ailing Professor X in a hide out on the Mexican border. But Logan’s attempts to hide from the world and his legacy are up-ended when a young mutant arrives, being pursued by dark forces.

The X-Men franchise has had its fair share of hits and misses. While the original movie and its sequel X2 were mostly well-accepted, everyone would rather forget X3. Looking at the newer prequel franchise, once again, the first two pictures were really good, especially, Days of Future Past, while the third one – X-Men: Apocalypse – was just kinda meh. The most successful X-Men film to date is the spinoff Deadpool, which came out just last year. Now, Logan is following the formula set by Deadpool – the R-rating + the faithfulness to the source material – and is hoping for a win. The previous two Wolverine movies didn’t impress anyone, and that’s putting it mildly. Maybe, third time’s a charm? Both this being the 3rd sub-trilogy within the X-Men series and the 3rd movie of it.

Logan was written by Scott Frank, the director James Mangold, and a TV writer Michael Green. Frank has written 2013’s The Wolverine and 2002’s Minority Report, while Green is the writer behind Green Lantern (that sounds worrying, however, Green is also listed as the screenwriter for a lot of big upcoming films, like Alien: Covenant, Blade Runner 2049, and Murder on the Orient Express, so maybe his writing for Green Lantern was just an unfortunate accident that will never, hopefully, be repeated again?

Even though I had some worries about the writing for this film, I should not have, cause the narrative of Logan was just spectacular – cohesive yet varied and complex. I’m gonna go over all the different story points in the spoiler part, so here I’m just gonna mention some of the general stuff. To begin with, Logan had clever dialogue which provided the viewers with snippets of the overarching story, rather than explaining it through narration. Even the one explanatory scene was done in an interesting and modern way – through a video on a phone.

I also loved all the character moments that were written into the script: Caliban actually had some important stuff to do instead of just being an accessory, like in X-Men:Apocalypse; Professor X, even though he was old, has not lost his nurturing nature; X-23 was animalistic but intelligent (loved the moment when she sucked the bullets out of her hand): she did not say a word until the end of the second hour of the movie, and when she finally spoke, she did that in both Spanish and English, making her an even more of an authentic character; and, lastly, Logan himself has a variety of stunning moments that drove home the idea that he is not the Wolverine that we were used to seeing: this time around, he needed glasses and his claws did not pop out as easily as they used to. The moment from the trailer, where he holds up the comics was also great – it was so fun seeing a comic book character whining about the comics.

Thematically, Logan continued the tradition of all the X-Men films and looked at the staple topics of family and belonging, but not in any other movie have these two topics felt more relevant and emotional.

James Mangold is best known for directing The Wolverine and the awards’ nominated western remake 3:10 to Yuma (Logan was a kind of western too – set in a similar location but modernized). Mangold did an absolutely spectacular job directing the movie. The opening sequence was just wonderful – it set the tone for the film and explained the characters psychological and physical state with a single, quite short, action sequence. I also have to praise the director for using the various visual storytelling techniques – showing instead of telling. The overall action of Logan was also magnificent. If you thought that Deadpool was violent, then I can tell you that you haven’t seen nothing yet. Logan was 100 times bloodier and way more brutal – it was sometimes hard to watch. And yet, even though the picture’s themes and visuals were dark and brutal, the color pallet was not, meaning that one could actually see the action, instead of guessing what’s happening in the shadows.

Hugh Jackman was just absolutely wonderful. I’m so happy that he got a chance to finally play the type of Wolverine that he always wanted to play. I really am gonna miss him in this role. Jackman’s next project is a musical The Greatest Showman, which he is going to produce and star in. Patrick Stewart’s last outing as Professor Xavier was also excellent. I wasn’t expecting this many casual humor moments to come from him. His next gig is voicing the poop emoji in The Emoji Movie. Yup, this is the world we live in.

Richard E. Grant was amazing as Zander Rice. I loved his character’s look as well as behavior. Boyd Holbrook was good as Donald Pierce too. His character wasn’t the most interesting but I guess the movie had to have the ‘big bad’ – a mad scientist running things from above. Stephen Merchant replaced Tómas Lemarquis in the role of Caliban and did a much better job. Some of its due to better writing, but I also felt that Merchant delivered a more nuanced performance. Lastly, I have to mention how amazing was Dafne Keen as Laura/X-23. I really hope that this young lady has a bright future ahead of her, be it as the new lead of this franchise or working on other projects.

In short, Logan is a magnificent movie that pushes the boundaries of the comic book genre. It is well acted, has an emotional and interesting story, and spectacular action to top it off. 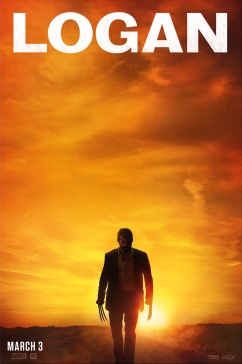