Welcome to a review of the movie that is either groundbreaking or just a continuation of the oldest Holywood tradition. It’s The Great Wall!

IMDb summary: European mercenaries searching for black powder become embroiled in the defense of the Great Wall of China against a horde of monstrous creatures.

My introductory point about this film possibly being groundbreaking has to do with the circumstances of its creation. The Great Wall is the first major co-production between US and China (Kung Fu Panda 3 was also a co-production and came before this movie, but it was an animated project rather than a live-action one). And yet, this movie has also been accused of whitewashing – the old trend for Hollywood, which only recently started receiving some backlash. So, can this film be a start of something new or is just the same old thing?

The picture’s script was written by Carlo Bernard and Doug Miro (writers of the Prince of Persia movie), and Tony Gilroy (writer of the first 4 Bourne films and Rogue One). The combined previous filmography of these screenwriters is of mixed quality and the writing for The Great Wall is also kinda mixed, mostly leaning towards mediocre.

To begin with, the whole decision to have a white lead was not explained that well during the runtime of the picture. It made sense to have a white lead and a supporting cast, full of Chinese actors, from the business standpoint, but it didn’t make much sense story-wise. The film, at least, stated that Matt Damon was not supposed to be playing a Chinese character but a European explorer, who is looking for gunpowder, so Damon’s casting cannot necessarily be called whitewashing. However, the decision to focus on a European hero, who saves China, brought up the whole ‘white savior’ debate. The fact the character’s arc begun with him wanting to steal the gunpowder didn’t paint the best picture either. Is the film, then, only reaffirming colonial thinking or is trying to tell a historical story accurately?  In short, I, personally, didn’t think that the picture gave a good enough explanation for having a European lead (played by an American) in a foreign setting. Even the film The Last Samurai came up with a better reason.

Speaking about the other aspects of the writing – I did enjoy quite a few of them. I liked the world-building and the mythology that the film was inspired by. I loved the idea to have a variety of specialized parts of the army. I liked that the lead character was written as an archer, because of my personal fondness of archery. I appreciated the fact that two languages were used in the film – it made the movie seem more as a co-production in contrast to it appearing as if Hollywood just hijacked another foreign story. I also loved that so many female warrior characters were written into the story. I don’t actually know if that is historically accurate, but I didn’t care much, in the moment of watching the movie. The picture’s attempt to have an underlying important theme – the opposition between paid participation and the true loyalty – was also commendable. While this debate wasn’t really treated as fully as it should have been, I like the fact that the film at least tried to be something more than it ended up to as.

And that final something is the fact that the film’s story was just kinda meh. The narrative was simple and straightforward – nothing one hasn’t seen before. It had two obvious plotlines – the first about fighting the monster and the other about stealing the gunpowder – which converged in the end. The main character’s change of heart during the finale was predictable and cliche. Basically, for a movie that did something very different with its financing and production, The Great Wall should have also done something new and interesting with its story.

The Great Wall was directed by Zhang Yimou. The majority of his films act as Chinese submissions for the Academy Awards in the Best Foreign Language category, so he is an accomplished director. His direction for this movie was quite nice too and I do think he did the best he could with the given material.  The action scenes looked cool and I liked the massive scope of them. The film had some impressive long takes too. The historical setting, as well as the different sections of the army, were also realized well enough. Plus, the design of the monsters was varied and quite interestng (they kinda reminded me of the zombies from World War Z because of their movement and the sounds they emitted). However, the CGI definitely could have been more photorealistic, especially in this day and age.

My favorite action sequence was the first battle, mostly because it was reminiscent of the final battle from The Lord Of The Rings: The Two Towers, although not as good. I also really liked the smaller corrida-type (Spanish bull-fighting) fight scene, in which Pedro Pascal’s character was luring the monster and Matt Damon’s character was trying to shoot it with an arrow. I also loved that the battle scenes had a diegetic beat – the drumming within a story provided a rhythm for both the characters, who were fighting, and the viewers, who were just enjoying the soundtrack. Lastly, the scene with the Chinese lanterns also looked lovely but, as weird as this sounds, it didn’t felt unique. These lanterns are now used all over the world for various celebrations (or in movies, like Tangled), so their usage in an actual Chinese setting didn’t seem as unique as it should have.

Matt Damon played the lead and did as good a job as he could have. Honestly, he has never been my first choice for a historical movie but he did make the role work. Even with all the whitewashing backlash, Damon will be fine, as his career has been going great. While his return to the role of Jason Bourne wasn’t as positive as it could have been, his work on The Martian is still on everyone’s minds. Besides, in addition to acting, Damon’s producing work has been going great, as the film he recently produced – Manchester by the Sea – is a big awards nominee this season.

Pedro Pascal played a supporting role and brought a tiny bit of a different kind of diversity into the picture. Pascal impressed everyone on a single season of Game of Thrones and I am kinda surprised that his work on GOT didn’t lead to more roles for him. Nevertheless, I really liked his The Great Wall’s character’s sass – it pleasantly reminded me of Oberyn.

Willem Dafoe also appeared in the movie and didn’t have much to do, while the Chinese part of the cast delivered great performances. Jing Tian was amazing as the female lead, while Andy Lau and Zhang Hanyu did a good enough job with what they were given as well. I really wish that I knew more about these actors and their previous filmography.

In brief, The Great Wall was a film, whose behind the scenes story was more interesting than its on-screen plot. While it might have broken grounds from the business standpoint, it was nothing more than average from the creative one. 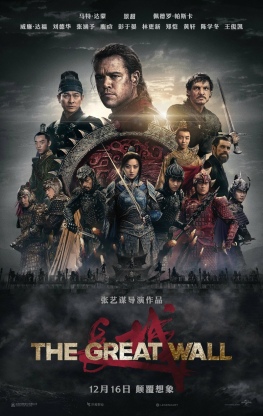