I am closing the holiday season by watching and reviewing the last big movie of 2016 – Passengers.

IMDb summary: A spacecraft traveling to a distant colony planet and transporting thousands of people has a malfunction in its sleep chambers. As a result, two passengers are awakened 90 years early.

I have been really looking forward to this movie, as it stars two of the biggest stars of today. However, then the paycheck news overshadowed the film and, later on, its critical scores, as well as the box office haul, were lesser than expected, so, I started having some reservations. These reservations were also the reason why I didn’t go out of my way to see this film before I made my best film list for the year. It was probably a good thing, as this movie, most likely, would have ended up on the worst list since  I had quite a few problems with it.

Passengers was written by Jon Spaihts, who also wrote Prometheous (one big plot hole of a movie), co-wrote Doctor Strange (how?) and is penning the upcoming The Mummy reboot. The majority of the problems I had with the film were because of its narrative. Let’s just go straight to the case: while the big reveal was not surprising to me, as I find out about doing my research before the film, it was still infuriating. I don’t know if I am the only one who finds the fact that Pratt’s character picked a gorgeous young female to keep him company more than unsettling. So, should we all make important decisions that our survival might depend upon based on purely physical attraction? Having read that sentence back, I suddenly realize that this actually happens in the real world constantly. Well, I still don’t want to see that in the sci-fi movies that are supposed to portray the better and brighter future.

Moving aside from the big spoiler-y reveal, the story by itself was not the most original. The movie was mostly a slow and sappy love story, so don’t expect to find any elements of a sci-fi thriller in Passengers (if you want an engaging space opera, just watch Gravity, Interstellar or The Martian). The plot was super predictable for the most part and the action really only picked up when one of the crew members woke up. But, yet again, the movie went back to its romance aspect and had a cliche ending.

The writing for the main female character was not the best either. I didn’t find her to be a particularly likable – she was a bit annoying and pretentious. I know I have championed unlikeable characters before but only if they were interesting. I didn’t find Aurora interesting at all. Her name, in reference to the Sleeping Beauty, might have been the most exciting thing about her.

Despite me hating the bigger part of the story, I want to mention at least a few things I liked. First, the whole discussion about humanity and culpability was interesting even if not handled efficiently or correctly. Secondly, the set-up, the backstory of the ships and the company its belongs to, and Pratt’s Jim’s character development were all quite good. Thirdly, the movie did have a few cute moments and a couple of funny lines that didn’t make me cringe or facepalm.

The director of The Imitation Game (absolutely adored that picture) Morten Tyldum directed Passengers and did a good job. I loved how the film looked visually: the design of the ship (both the inside and the outside) was stunning and the CGI effects of space and the stars were gorgeous too. All the space walk scenes, as well as the gravity loss at the pool scene, were my favorite (because they didn’t involve a lot of talking, just the visual part of filmmaking). The pacing could have been neater, but overall, I felt that Tyldum did the best he could with a flawed script.

Chris Pratt (The Magnificent Seven, Guardians of the Galaxy, Jurassic World) was magnificent in the lead. He was charming and likable and made that awfully misogynistic character of Jim seem passable. I liked the fact that his character was an engineer, though, at least that added some logic to the film.

Jennifer Lawrence (The Hunger Games, X-Men, Joy) was also good in the film but that’s a no brainer. What baffles me is why she even took on this role: it wasn’t challenging at all, just a role of a cliche female love interests. It just seemed way bellow Lawrence’s, Academy Award WINNER’s, level. If she only took it for the massive paycheck – well, that is even more problematic, as she doesn’t really want to add the adjective ‘greedy’ to her already sinking image. In addition, the movie’s opening weekend’s domestic box office didn’t even cover her paycheck! If she is not a draw for the movie goers, why would you pay her this much, especially, when this role could have been played by any other young actress.

The film didn’t really have a supporting cast, it was mostly a two people show. Nevertheless, Michael Sheen (Nocturnal Animals, Alice 2, Far From The Madding Crowd) was great as the android bartender, while Laurence Fishburne was also okay in the few scenes he had. His story and passing were probably more emotionally appealing to me than the whole romance of the two leads.

In short, Passengers was an okay movie with some problematic ideas (if you just think about it longer than a minute), stunning visuals and great performances from the overpaid cast. 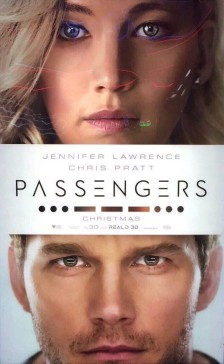