Today, I’m reviewing Allied – the movie that ‘broke’ Brangelina, the ‘it’ couple of Hollywood. Okay, I’m kidding –  I don’t actually believe or care much about the rumors. To me, Allied is, first and foremost, a film by a director that is of my native descent (Zemeckis is half-Lithuanian).

IMDb summary: In 1942, an intelligence officer in North Africa encounters a female French Resistance fighter on a deadly mission behind enemy lines. When they reunite in London, their relationship is tested by the pressures of war.

Steven Knight wrote the screenplay for Allied. So far, his accomplishments have been a bit average: I absolutely loved his small film Locke and really enjoyed the stories of The Hundred-Foot Journey and Pawn Sacrifice. However, Knight also penned the script for the so-so picture Burnt and wrote the completely awful Seventh Son as well. His next film will be a different Brad Pitt picture – Wold War Z 2. Speaking of the writing for this film, quality-wise, Allied was a mixed bag , just like Knight’s track record.

I felt that Allied contained two distinct stories which could have been explored in two separate movies. The first suspenseful act of the two characters falling in love on a mission was cool and interesting. It was a successful homage to Casablanca and the Golden Age of Hollywood. The second story – the home life and the investigation – was much slower and less interesting than the preceding set-up. Nevertheless, I did enjoy the fact that this film focused more on the romance and less on the war because I have already seen enough historical films, in which the romantic aspect is relegated to the sidelines and feels out of place. Allied made a decision to be a romantic movie first and a war drama second and stuck with it. I, as I have mentioned, enjoyed and liked this idea, but I can also understand that some people might see it as too sappy and melodramatic. I, personally, found it touching and heartbreaking, although not Casablanca level heartbreaking (Allied didn’t reach the levels of ‘We’ll always have Paris’ is what I’m saying).

Having said that, Allied still did have some pretty nice lines of dialogue and some rather cool concepts. I don’t really know why but I liked the trailer line: ‘Being good at this kind of job is not very beautiful’. I also enjoyed the ideas about love in war – the problem isn’t the action of getting involved, it is feeling something about the involvement. Lastly, I liked how the film underscored that the two main characters could never be trusted, as they were trained to lie.

Robert Zemeckis, who is responsible for creating a whole slew of cinematic classics – Back To The Future trilogy, Who Framed Robert Rabbit, Forrest Gump, and Cast Away and whose latest films include The Walk and Flight, directed Allied and did quite a good job. The film looked beautiful visually, although the CGI at the beginning (the desert) seemed a tiny bit fake and took me out of the film. Other historical settings were realized nicely, though. Zemeckis also used a lot of time jumps in the film and they did make sense for the most part. Lastly, I did like his long takes that some critics panned. At first, they seemed unnecessarily long to me as well, but then I realized that they were this long for a reason and were meant to show or to indicate something extra.

I think that the lead duo – Brad Pitt and Marion Cotillard – did an amazing job. First, they had crazy good chemistry and made a believable couple – their back and forth dialogue was superb, especially in the first act. Secondly, I think that the two actors nailed the ‘fake’ spy acting and didn’t make it seem cartoony. I was also quite surprised to see Lizzy Caplan in a supporting role and thought that her character was interesting, although, I question the motives behind the decision to include her character. A trio of actors, who seem to constantly appear in historical movies – Jared Francis Harris, Matthew Goode, and Simon McBurney, rounded up the cast of Allied and brought solid performances too.

In brief, Allied was a solid romantic war drama. It had good acting and a decent story and visuals. However, the film was not groundbreaking, which it could have been, knowing who was involved in its making, both in front and behind the camera. 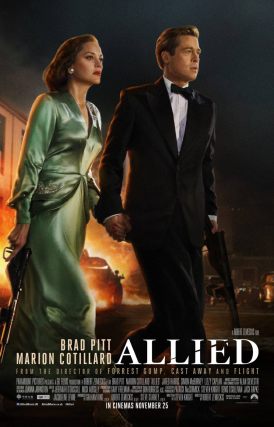