Welcome to another Amy Adams movie review. A few back, I discussed Arrival and today, I’m giving you my thoughts on Nocturnal Animals.

IMDb summary: An art gallery owner is haunted by her ex-husband’s novel, a violent thriller she interprets as a veiled threat and a symbolic revenge tale.

In short, I would describe Nocturnal Animals as Hell or High Water and The Neon Demon put together. The more glamorous parts of the film (the bourgeoisie and the art scene), as well as the stylistic look of it, reminded me of The Neon Demon (plus, Demon was about the fashion world, Animals directed by a fashion designer), while the grittier parts – the book’s plot – were reminiscent of Hell or High Water both visually and thematically.

The fashion designer Tom Ford both wrote, directed, and produced Nocturnal Animals. This was his second attempt at making a feature film . I’ve not seen his first movie – A Single Man – but he impressed me a lot this time around, so I will most likely check out his debut movie. He successfully transitioned from designing to filmmaking and I’m excited to see what he will come up with next.

I absolutely loved the clever and intriguing narrative of the film. All the different storylines – the reality, the book’s plot and the flashbacks – were separately interesting and distinctive but I also liked how they were combined and how they mirrored each other. In general,  I would say that the fipm was based on  thematical dichotomies – Texas vs. LA/NY, parents vs. children, felons vs. victims, past vs. present, and book vs. reality – and all of them were super engaging. I also liked the fact that the movie did not take sides: it critiqued both the southern traditional way of life and the uber modern and stylish world of the urban high classes.

Nocturnal Animals also appealed to me because it explored my biggest anxieties: the most obvious one was, of course, all of the events of the book (kidnap, rape, and murder). However, the fear of becoming like my parents and the anxiety which surrounds the uncertainty of my future are both very familiar and deeply personal to me as well.

The movie had a very open ending and left some questions unanswered. Three theories immediately sprung up in my mind. 1. Maybe the film’s message was that one cannot truly change the past and it might sometimes be too late to say sorry, so that’s why the ex-husband didn’t show up. 2. Maybe, the novel’s events were just the main character’s way of dealing with the past mistakes a.k.a. putting ideas into a narrative and the ex-husband wasn’t actually a real person. 3. Maybe the book was just one big suicide note and that’s why he didn’t show up?  I’m probably totally wrong but it is fun to speculate and think about it.

Nocturnal Animals had an interesting blend of visuals: it mixed urban lights with rural desserts. I especially loved all the landscape shots – the framed stills would make for some amazing photographs. The way modern art was used in the film was also interesting. I, personally, don’t get modern art but I can appreciate it. However, I got to say – I was a bit weirded out by the opening of the film (nudity) and wasn’t entirely sure if I was even in the right screening. However, I think that that was the point of the scene – it was meant to shock and to showcase the eccentric world of art that the film’s main character inhabited.

Nocturnal Animals was a perfect example of a successfully and tastefully stylized movie. Tom Ford’s design background and eye for textures and colors really assisted him in the choice of visuals. In addition, he dealt with the pacing of the picture very well: it was slow but never dragged – it was suspenseful and mesmerizing without beeing cliche.

Abel Korzeniowski did the soundtrack for the film. I really liked the instrumental score: it fit both the visuals and the narrative nicely. My favorite track was the one that sounded like the sextet from the movie Cloud Atlas. That particular track accompanied a variety of scenes and was also played during the credits.

The film had a stellar cast. Amy Adams was magnificent – I liked her performance even more than the Arrival one. Her eye-acting was mesmerizing. I also loved the way the movie played with the fact that Amy Adams’s and Isla Fisher’s look very similar. Jake Gyllenhaal was also brilliant – he lost himself in the role as he usually does. Michael Shannon was also a stand-out – loved his cool yet realistic portrayal of the detective. Lastly, Aaron Taylor-Johnson completely surprised me – this was probably his best role that I have seen yet just because it felt like the most challenging one. He was so good as the crazy, cocky, and eccentric felon. Armie Hammer also appeared in the film in his signature role of  ‘a white privileged businessman’.

In short, Nocturnal Animals was beautifully stylized film, which also had important themes and interesting narrative ideas to match its gritty and glamorous visuals. The acting was also top-notch. 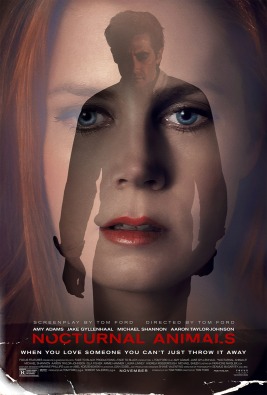