An original sci-fi flick – Arrival – has landed in cinemas, so let’s review it! Since I hadn’t seen an inventive science fiction film in theaters for quite some time (I did, however, only recently watched an original sci-fi movie on Netflix, called ARQ – it was quite entertaining), I was super excited to see Arrival. Plus, I’ve also really enjoyed the previous work of the director as well as the cast.

IMDb summary: A linguist is recruited by the military to assist in translating alien communications.

Eric Heisserer, who has mostly written horror films, penned Arrival’s script and did an absolutely spectacular job. This movie’s narrative was so refreshing – it never went where I expected it to go.

To begin with, I appreciated the fact that this movie focused on a linguist and on the subject of languages and communication. Sci-fi films usually tend to have scientists or military personnel front and center, but this time, these types of characters were relocated to the supporting positions. As someone who studies art and humanities, I was extremely happy to see these subjects as useful in a sci-fi scenario, since usually after watching a science fiction movie, I would regret not studying physics or biology. But now, I can imagine that my language and anthropology skills can also be useful.

On the topic of anthropology, last year, in my symbolic anthropology class we studied the Sapir-Whorf hypothesis that this movie took and made true. The hypothesis states that one’s language determines one’s culture, behavior, and thinking and Amy Adams’s characters mind was heavily impacted by the alien language. On the topic, of Adams’s character – I loved how the plot played up her backstory. Those ‘flashbacks’ were not only a story-telling technique but a part of the actual story. That was amazing and mindblowing.

Like other science fiction films, Arrival explored the topic of humanity. Some of the ideas and dialogue lines sounded a bit ironic and skeptical, especially in the post-Brexit and post-U.S. election context. The notions that the world needs to work together and that peaceful communication come first rather than violent attack/defense are wonderful ideas, but I highly doubt their real-life application. The plot-points about protecting humanity by not talking to other humans seemed like a more realistic outcome of the situation. The media’s role in all of this mess was also a great and topical inclusion for the modern context. Lastly, showcasing the panic as the biggest threat to humanity was also good writing! These thematical parts of the film frustrated me quite a bit, but then again, these kinds of things frustrate me IRL, so I guess the movie just represented the contemporary world and explored its negative aspects and shortcomings really well.

Arrival, like a lot of other sci-fi films, started as a grounded science movie but then quickly escalated into the fiction territory. It asked questions and didn’t answer some of them. With these type of movies, there is always a debate going on whether there was some kind of deeper meaning and I was just too stupid to notice it or whether the film was just badly written and didn’t make much sense. Having said that, I think this debate is part of the beauty of making and writing about motion pictures – they always mean something different to different people. I also believe that Arrival is a brilliant and intriguing film to watch and discuss.

Denis Villeneuve, who is best known for making 2013’s Prisoners and last year’s Sicario, directed the film and did a wonderful job. The visuals were spectacular: the design of the ships – so simple yet so cool and the long tracking shots – awe inspiring. At first, I wasn’t completely sure about the design of the aliens, but when we got to see them whole, I was pleasantly surprised. The way the communication aspect was visualized was super cool too. I also liked all the inventive and innovative camera angles. On a personal note, I loved Amy Adams’s character’s home – would love to have a house with such a stunning view myself.

I also really liked the pacing of the film – it was slow and suspenseful and did not need some big and over-the-top 3rd act action piece to be memorable and entertaining. The music choices (by Jóhann Jóhannsson) were great as well and really helped to build thrilling, frightening and yet curious type of atmosphere.

In short, Arrival was a visually stunning picture, with an extremely clever and interesting story and some nice thematical concepts and great acting. It is a great conversation starter of a movie. 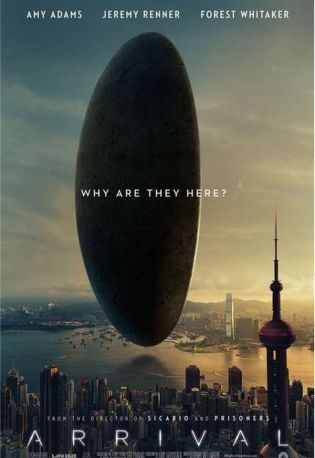