The newest Marvel film – Doctor Strange – has premiered in some places around the world, and since I’m lucky enough to live in one of the places that got the movie real early , I can already give you my thoughts on it! Since this review is ahead of the wide release of the film, some of it will be spoiler-free and then I’ll give a big spoiler warning for those who want and can continue to read further. Let’s go!

IMDb summary: A former neurosurgeon embarks on a journey of healing only to be drawn into the world of the mystic arts.

First, I will begin this review by stating that I’m a Marvel fangirl, so that could color my judgment (I would love to be a DC fangirl as well, it’s just that DC doesn’t allow me to be one yet – praying that Wonder Woman will be good). I have reviewed more than a couple of Marvel films already and gonna link them for those who are interested: Guardians of the Galaxy, Avengers 2, Ant-Man, Civil War.

Also, I would like to briefly mention that, once again, the screening that I attended had a predominately male audiences, like the majority of the comic book movie screening this past year. This kind of audience breakdown explains why Marvel doesn’t want to make a Black Widow movie but I do hope that Captain Marvel will bring more girls/women to the cinema.

I was really looking forward to Doctor Strange for quite a while, I was really excited to see magic being introduced into the MCU. I was also interested to see if Marvel Studios will be able to launch another successful franchise, which revolves around a weird character. So far, their gambles (Guardians and Ant-Man) have paid off, so Doctor Strange will probably follow suit, because, let me state this loud and clear – it is an amazing movie. I will go through the different aspect of the film in and give you an informative but a spoiler free overview. Then, I will give you a spoiler warning and talk about interesting story points. Lastly, although the first part of the review will be spoiler free (I’ll try my best), I would still advise you to read it at your own discretion. It’s gonna be a long post, so get some snacks or drinks.

A few people worked on the script as well as the story of the movie, including the director Scott Derrickson, C. Robert Cargill (writer of the Sinister movies) and Jon Spaihts (wrote Prometheus and these upcoming pictures: Passengers, The Mummy and Pacific Rim: Maelstrom). I wasn’t that familiar with their previous work but they impressed me a lot with the story and dialogue of Doctor Strange. Although the movie’s narrative revolved around the origin story, it was executed really well, without making it cliche or stereotypical. The dialogue and the jokes were also marvelous. All of the comic relief worked and tied the movie to brand that is Marvel (in contrast to DC). The familiar types of jokes were a reassurance that one was watching a Marvel movie since the visuals were so unique, different and nothing I’ve seen before in a Marvel film, or in any film for that matter. The dialogue and the character interactions were snappy, emotional and clever. The seeds have also been sown for future sequels and the references to the wider universe (Avengers and Infinity Stones) were also present.

My only gripe with the writing was, and I cannot believe I’m saying this, the villains. AGAIN. Marvel, come on! Either cast more appropriate actors, or have better writing for your villains. Don’t get me wrong, they were not that bad, just not quite right and as high of a quality as the rest of the film.

Scott Derrickson, who has mostly worked on horror films, directed the movie and did a spectacular job. However, half of the praise should also go to the cinematographer Ben Davis (A Long Way Down, Guardians, Age of Ultron, Genius), because the visuals of the movie were its strongest point. They are really hard to describe and deserve to be seen on the biggest screen possible.

Despite the visuals being indescribable, I will attempt to explain them somehow. Basically, all the warping and shaping of reality gives off feelings of madness and has a slight Mad Hater/Wonderland aura. All of the folding buildings do remind a bit of Inception, but I would also say that Doctor Strange takes this type of visuals to an extreme. The mirror effects, the kaleidoscopic folding, the clockwork-like structure and the domino-like movements really make the film a sight to behold and marvel at.

The variety of different locations were also really great – they added a global aspect to the film and even more flavor. I absolutely loved the fact that the Ancient One lived in Nepal – it kinda tied the sorcerers and magic to Buddhism and monks (at least that’s the connection I made in my mind). Doctor Strange was also one of the only films in which magic and the modern world worked well together because I usually enjoy fantasy films that are set in the past more, but this picture broke that tradition. The action was also great – the movie found a balance between physical and magical fights as well as their mixture.

Lastly, I loved all the costumes of all the characters, but especially Strange’s. His cape was wonderful – not only a costume but also a tool, a living tool – so cool! Other gadgets that he had were also neat and have a lot of merchandise potential (read the spoiler part to find out what I’m definitely buying).

On a separate note, Doctor Strange was the first movie to feature the new Marvel Studios logo. This one looks more cinematic than the last one and it also has a sense of nostalgia and grandeur – something along the lines of ‘oh, look how far we’ve come’.

In short, Doctor Strange is another win for Marvel. The film successfully told an interesting origin story, introduced a bunch of characters and blew me away with the visuals. I’ll most likely see it again in a few weeks time.

In this part, I would like to talk about a few plot points as well as a few action sequences that really stuck a cord with me. To begin with, let’s look at the characters and their interactions. I loved the writing for Doctor Strange – he started as a super cocky yet efficient person and had an amazing story of hero’s growth. I really liked seeing him as a surgeon, just being in his element in contrast to him being completely lost and failing miserably during his magical training. Strange’s interactions with the other doctors as well as with Christine were also amazing: funny and kinda annoying but still enjoyable. I also thought that the love story worked and wasn’t forced. It seemed organic and was full of both bad times (the fight in the apartment – amazing back and forth dialogue) and nicer ones (Christine saving Strange’s life). I loved Strange’s relationship with his mentor – the Ancient One – too and I liked the pep-talk that she gave him before dying. I also enjoyed the ideas and lines that the scriptwriters wrote for her character, including ‘Not everything makes sense, not everything has to’. Strange’s and Mordo’s relationship was also interesting and had more than a few moments of foreshadowing. The biggest hint at what will happen in the future was, of course, the post-credits scene, in which Mordo was seen stealing powers from the other sorcerers. This probably means that he will be the main villain the sequel .

As I have said, the movie had plenty of jokes and quips. Some of the best ones came from Strange’s and Wong’s interactions: ‘Wang? Like Adele?…Or Aristotle?…Or Eminem?’; ‘Try me, Beyonce’, followed by a shot of Wang listening to the song Single Ladies; ‘People used to think I was funny. Did they work for you?’. The wifi moments from the trailer was still funny as well, despite the fact that I’ve seen it numerous times. The mid-credits scene’s self-refiling pint of beer was extremely entertaining too.

All of the action sequences were amazing and they were all also kinda distinct. Doctor Strange’s first encounter with the Astro plane was crazy – so cool and so mad.  That taster we got in Ant-Man was nothing compared to this. It got a bit creepy at times, though, especially with those tiny hands (Deadpool?!).  The fight in the Astro plane in the hospital was cool too and expanded on the idea that we are now dealing with multiple realities (that voltage and magic relation – great). Same with that mirror world – I liked the fact that we got to travel to it and through it quite a lot.

The time gem, which is the eye of Agamotto, really came into play in the last act of the film and was utilized well. I liked the turning back of time, the stopping time, the time loop and the breaking the laws of nature plot-points quite a bit.

The villains of the film were my biggest and only issue. The way that Dormammu was realized seemed a bit cliche and, for such a powerful being, he seemed to be defeated to easily. I hope he comes back in the sequel. The character of Kaecilius was only okay, while he could have been amazing. He had reasons to be angry and also had a kinda personal relationship to the Ancient One but he just didn’t seem to be used fully.

Moving forward, Doctor Strange will definitely show up in the Infinity War and his time gem will have to get stolen during the first part of the Avengers 3. The mid-credits scene with Thor might also be an indication Strange will show up in Thor Ragnarok – that would actually be really cool, would love to see Strange and Loki interacting!

So, that’s it for the spoiler part. I would love to hear what you liked and disliked about the movie in the comments! 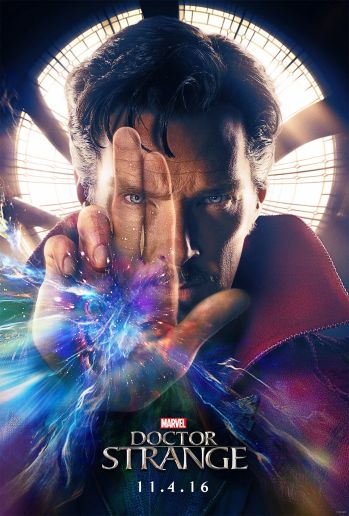