The latest film in that other Tom Cruise action-spy franchise has landed in theaters, so, let’s talk about it! This is the review of Jack Reacher: Never Go Back.

IMDb summary: Jack Reacher must uncover the truth behind a major government conspiracy in order to clear his name. On the run as a fugitive from the law, Reacher uncovers a potential secret from his past that could change his life forever.

While I’ve closely followed Cruise and his Mission: Impossible movies, I managed to somehow miss the first Jack Reacher picture when it was first released in 2012. However, I did my homework and watched it before going to see the sequel. I really enjoyed the narrative of the film: the story was a bit different from the usual action movie plot. It had more of the actual investigation and an interesting dialogue rather just a ton of physical fights. But, when the action did happen, it was quite cool too – it was more rugged and down to earth than the spectacular and over the top action sequences in MI. Jack Reacher’s action reminded me of the action in Jason Bourne films, just with less shaky cam. The characters were fine as well, although the film was mostly a Tom Cruise show.

While the first film was a delightful surprise, the second one was just another uninspired and cliche sequel. I didn’t really have any expectations going into this film and I was right to not expect anything because Jack Reacher: Never Go Back was just an average action movie at best.

Richard Wenk (The Mechanic, The Equalizer, The Magnificient Seven), the director Edward Zwick and Zwick’s long-time collaborator Marshall Herskovitz wrote the screenplay for the film, adapting Lee Child’s 18th book of the Jack Reacher series. I had a lot of problems with the story. For one, the whole set-up seemed forced and rushed. It took two phone calls for Reacher to want to help Turner, while in the first film, more than 30 minutes had to be spent to actually get Reacher into the action. That whole thing with Turner being wrongly accused seemed like a recycled idea from the first movie as well. And don’t even get me started on that plot-line concerning his maybe-daughter – she was super annoying and was a huge liability to both the characters and the film’s narrative. She had one smart scheme, which we didn’t even see her carrying out – we were just told about it, and a ton of stupid ideas. And why even include her if she turns out to not be his daughter after all? Only to have that cheesy goodbye that didn’t add anything to the picture?

The villain showed up in maybe like 3 or 4 scenes in the whole movie. If you want to see a much better movie about the government contracts and arms’ dealers, then just check out War Dogs. Lastly, while the first film was slow but had a somewhat interesting dialogue about the investigation to fill in the time between the action, its sequel had a ton of small talk that didn’t get the movie anywhere. When it tried to foreshadow or set-up something, it did that in the most obvious way possible. From a thematical standpoint, I did like the overarching military v civilian life debate, however, what I didn’t appreciate was that whole male/female bickering. That plotline was irrelevant and felt out of place even more than the father/daughter storyline.

Edward Zwick, who has previously worked with Cruise on The Last Samurai and has also directed such films as the biopic Pawn Sacrifice, the war drama Defiance, and the comedy Love & Other Drugs, helmed Jack Reacher: Never Go Back and did an okay job. He opened the film with the sequence from the trailer, which I have seen multiple times before even watching the movie since I go to the cinema a lot. Wish they would have either chose a different scene for the trailer or changed it up a bit for the movie. The overall action was fine but nothing too striking or worth mentioning. I liked the gray colored shots of Reacher visualizing the escape or the past events, but the movie kinda dropped this idea halfway through.

In short, Jack Reacher: Never Go Back is an average sequel that basically advises its potential viewers to skip it. The story is awful, the directing is okay and while the acting is good, the cast is not given enough solid material to work with. I advise you to Never Go Back to the Jack Reacher films. 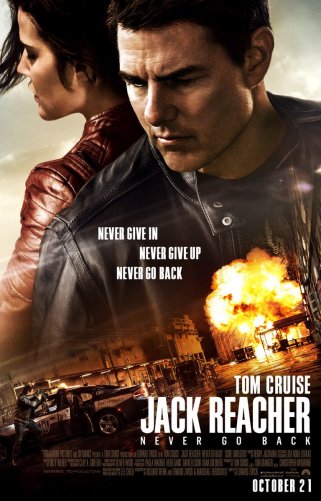