In the middle of October, the latest Ron Howard and Tom Hanks collaboration – Inferno – will hit theaters. So, I decided to educate myself on the source material – the amazing bestsellers by Dan Brown as well as the 2 previous films of the franchise – and want to tell you all about my educational and entertaining journey into the world of Robert Langdon.

While all of the books in the Robert Langdon series are stand-alone novels, I decided to read them in the order that they were published. My dad used to a big fan of this author’s work, so I had all the novels in my home library. I truly enjoyed reading this series that blends history and modernity beautifully; unravels the whole narrative in such a limited time frame (the stories span maximum of 2 days) and finds real facts to prove conspiracy theories (sort of). A few ideas about the 4 different accounts of the exciting adventures:

In general, as I’ve said, I loved all of the works by Dan Brown. This series is like a virtual tour of historical cities that I desire to visit in real life as well. My only gripes with the books were 1. the repetition of story devices and 2. a slight overdramatization. After reading all of the volumes of the series, I started noticing that all of the female characters were kinda similar – they all were either daughters/granddaughters/sisters/lovers of the other important characters of the books. All of the 4 leading ladies were also used as the love interests for the main character but they never resurfaced a second time. Robert Langdon’s position was also always pretty much the same – he would be sucked into the action by accident and would usually become a temporary outlaw. The villains tended to be people from the outskirts of society that don’t fully fit in – they were either the assassins, the crazy monks, the revengeful family members or the misunderstood geniuses. Lastly, the author really seemed to like his ending twists – all novels revealed a lot of stuff during the last 20 pages and these ‘exposures’ totally turned things around and changed the stories almost completely.

The 2nd and 3rd books shared an idea that ‘people are not ready to find out some historical truth’, while the 1st and 4th novels focused on some kind of modern technologies that were used in the attempted destruction of the world for religious reasons. The 1st book was my favorite, while the following 3 all shared the runner’s up position.

The Da Vinci Code was the first book to be adapted into the film in 2006. 3 years later, the big screen adaptation of Angels & Demons was released. I don’t know why they decided to switch the order of the first two books when adapting them, especially, since I felt that Angels & Demons was the stronger novel and might have been a better starting feature of the franchise. I also have no idea why they skipped the 3rd book and decided to adapt Inferno instead. Also, why wait 7 years to adapt the next movie? I think that the audiences might have already forgotten the character of Robert Langdon, particularly, in the market oversaturated with thrillers, adventure films, crime dramas and superhero movies (Ron Howard’s adaptations have various aspects in common with all of these genres).

I also don’t understand why the two films have been panned by critics this much. The few reasons that I can spot in common between all the reviews is the fact that the movies have a lot of narration and that they critique the church – all the reviewers seem to be personally offended by this commentary. I also can not comprehend how the Catholic Church feels threatened by a piece of fictional entertainment/commercial art. Is the church really this weak to see a slightly diverging idea as a serious menace to its thousand year old history and a thousand year long world domination?

A few ideas about the two movies purely from the cinematic perspective: 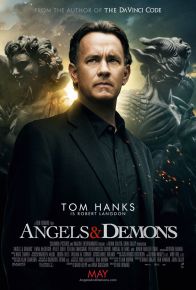 I hope you enjoyed this review of a franchise that spans a few mediums, both the cinematic and the textual one. I would really like to do more post like these. My Inferno review will come out as soon as I get a chance to see the film!

Have a great day!