Nerve – an original thriller in a sea of reboots, remakes and sequels – has finally hit theaters, so let’s talk about it!

IMDb summary: A high school senior finds herself immersed in an online game of truth or dare, where her every move starts to become manipulated by an anonymous community of “watchers.”

Nerve’s screenplay was written by Jessica Sharzer, who has mostly worked on TV until now. The script was based on Jeanne Ryan’s book with the same name, so it is not a totally original story, but at least it hasn’t been done on the big screen before. I absolutely loved the narrative of Nerve. I thought that it was probably the most contemporary thriller I’ve ever seen. Its topics were extremely relatable to all teenagers and young adults out there.

The cool update on the Truth or Dare game reminded me of YouTube Challenge videos and I think that the majority of the audiences of this film do watch YouTube and will understand where I’m coming from. On top of being extremely entertaining, the film also had some nice messages and things to say. It explored a modern friendship, full of jealousy and social stigmas. It showed the scary side of the Internet – the total loss of privacy – and cautioned its viewers to be careful. It also showed that computer skills and even hacking are useful traits to know in the modern world. Finally, the most important idea that Nerve spread was that one can be brave in the crowd or when he/she is protected by their username, however, the anonymous actions online have dire consequences in the real world to actual people and even oneself. This message should hang above everyone’s computer.

On a personal note, I loved the film Nerve because I could relate to it. I’m a kind of person who rarely takes risks or leaves her comfort zone, so I understood the character of Vee. In addition, being somebody who is usually in the shadow of her friends, I understood how the feeling of validation or acceptance can be intoxicating and addicting.

Nerve was directed  by Henry Joost and Ariel Schulman, who did the documentary Catfish and 3rd and 4th of the Paranormal Activity films. I really enjoyed the things they did with the project. The pace was always fast, so the story was unfolding non-stop. A small pause was taken before the big finale, but it didn’t seem like the movie slowed down – that break really built tension. When the actual finale of the film was happening, it did seem a bit over-the-top, but when everything was done and over, it somehow all worked. The actual visuals of the program, the various POV shots of the characters as well the POV of the game (webcam, front camera) were really cool and appropriate for the film. The end credits in the style of social media posts also rounded up the feature nicely. Nerve also had an amazing soundtrack, I was Shazam-ing all of the songs. It general, it reminded me a lot of a different film with a good soundtrack, which I saw at the end of last summer – We Are Your Friends.

Both WAYR and Nerve were obviously aimed at younger audiences because they explored the topics that actually interest teenagers – EDM and Social Media. The two films also had similar soundtracks, as I’ve mentioned. I also predict that both pictures will be similarly successful – they will either bomb at the box office or do okay, but then will dominate the streaming.

Nerve and WAYR also share similarities behind the scenes – they both were made by related people. Nerve was directed by H. Joost and A. Schulman, who did the Catfish documentary. This documental feature later had a spin-off TV show on MTV, created by Nev Schulman (brother of A. Schulman) and his business partner Max Joseph. Joseph had a feature film debut last year, directing none other but We Are Your Friends. So that’s some interesting behind the scenes trivia for you.

The film had a cast of up-and-coming actors who never really stuck with audiences.

Emma Roberts, who has been around forever, played the lead Vee and did a great job. Her chemistry with Dave Franco – another actor, trying to create a career for himself without the help of his family – as Ian was amazing as well. I first encountered Roberts in the early 2000s, in a Nancy Drew film. Lately, I’ve also seen her in Palo Alto and We’re the Millers. Later this year, she will also be in Billionaire Boys Club with a bunch of other young actors. Franco popped up on my radar in 2013’s Now You See Me and 2014’s Neighbors. He also starred in both films’ sequels. Dave Franco will now go back to working in the family and will star in his brother’s films Zeroville and The Masterpiece. Afterward, he has a comedy The Little Hours coming up.

The supporting roles of a film were kinda cliche but served their purpose. Juliette Lewis played the over-protective mother. Emily Meade starred as the outgoing friend of Vee’s – Sydney, while Miles Heizer was Tommy, Vee’s friend who secretly had a crush on her. The rapper Colson “Machine Gun Kelly” Baker starred as Ty, a fellow player of Nerve and was quite an interesting character. A bit cartoonish, but entertaining nonetheless.

The film also had a cameo, which I, as a fan of Youtube, really appreciated. The filmmaker and daily vlogger Casey Neistat made a small appearance in the movie and his presence actually made sense.

All in all, Nerve was an entertaining picture, that had a surprisingly serious cautionary message. It had a great cast, interesting visuals, and a perfect pop soundtrack. I wouldn’t be surprised if the app like Nerve will be created in a near future. For now, we at least have Pokemon Go. 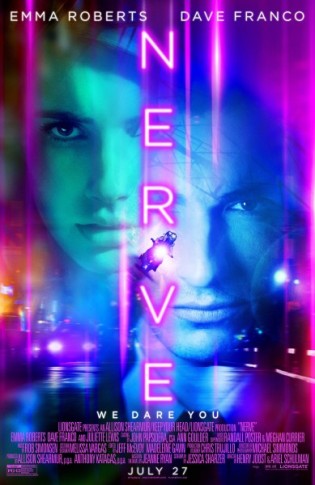