Since the BvS hysteria has died down and the next superhero craze hasn’t started yet, let’s review a movie that I’m 3 months late to review – Hail, Caesar! by The Coen brothers. In my defense, UK was probably the last place that this movie was released in. However,  I do acknowledge the fact that, although I saw this movie probably 2  months ago, I couldn’t find time to discuss it. Well, better late than never, so without further ado, let’s talk about The Coen brothers themselves and their newest creation – Hail, Caesar!

I would argue that The Coen brothers deserve to be called the modern auteurs of contemporary filmmaking for they distinct style and accomplishments in cinematic storytelling. They are able to take the core archetypes – the premises for either tragic or comedic stories – and make something spectacular and unique out of it. To give a few examples of this, I will briefly discuss their most well-known comedy The Big Lebowski, their most famous tragedy No Country For Old Men and their wonderful combination of these two polar opposites – Fargo.

The Big Lebowski: the kooky and quirky comedy that gave a start to a whole new religion. One of the weirdest films that I have ever watched, yet it still very clear and extremely funny. The story is kinda ridiculous (happens by accident and is a misunderstanding) but the film somehow makes sense in the end.

No Country For Old Men: a slow and suspenseful masterpiece, filmed in wide shots. Aurally haunting because of the lack of score. A great character study in a cohesive style of The Coens but, at the same time, very extraordinary and different.

Fargo: another example of the great usage of the wide and long shots. The film has a lot of  old school ‘fade to black’ transitions and uses the music really well. The mise-en-scene is full of white ‘any-space-whatevers’, as described by Deleuze. And, of course, all the ‘yah’ lines in that Minnesota dialect are iconic. Fargo is probably my favorite film by The Coen brothers.

Other films that The Coen brothers either fully made or only partially contributed to that I have seen are: Inside Llewyn Davis –  very personal story of a musician. This movie introduced me to Oscar Isaac for the very first time. The Coens also worked on Bridge of Spies’s and Unbroken’s scripts. Both of these films are very enjoyable.

Although, I have seen quite a few films made by The Coen duo, but I want to watch a lot more, especially Raising Arizona, Burn After Reading, A Serious Man, Miller’s Crossing, O Brother, Where Art Thou? and True Grit.

Now, let me tell you 5 things about Hail, Caesar!

IMDb summary: A Hollywood fixer in the 1950s works to keep the studio’s stars in line.

In short, Hail, Caesar! was not the best The Coen brothers’ film, but it was still enjoyable and pleasant. A solid B picture. 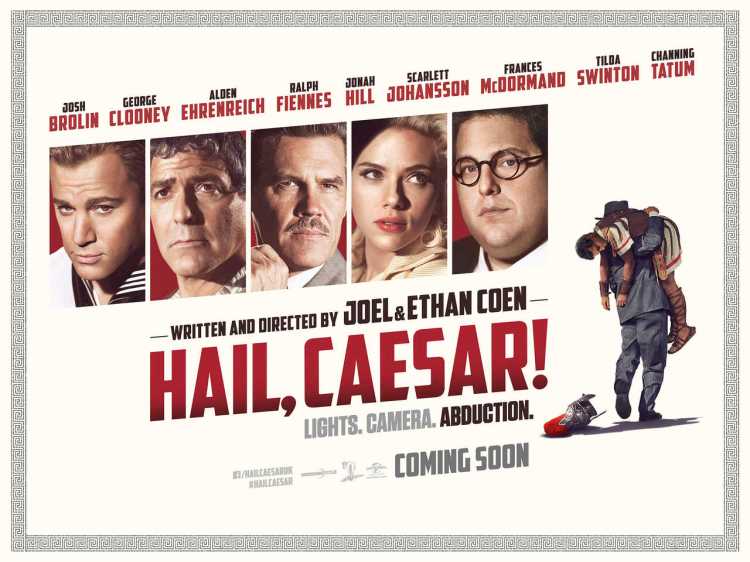 14 thoughts on “5 ideas about a movie Hail, Caesar! + The Coen Brothers”