How have you been? What movies have you been watching lately? I just went to see the new British film – Eddie The Eagle – and I want to tell you all about it!

IMDb summary: The story of Eddie Edwards, the notoriously tenacious British underdog ski jumper who charmed the world at the 1988 Winter Olympics.

British cinema, Sport, and Me

I have told you numerous times that I am a fan of contemporary British films. I really liked these movies even before I moved to the UK, but now, being a citizen of Britain, I love them even more. In addition, Eddie The Eagle is a sports drama (actually, more like a sports comedy), inspired by true events and it is also a story of an underdog athlete. If you have been reading my blog, you might know that I am a swimmer (or I used to be) and  I also run and cycle competitively. So, being an athlete myself, I had a personal connection with this film. In addition, like Eddie, I have never been that good when it comes to sport – I have always dreamed of being an Olympian, but I was never even good enough to become a national champion, let alone international one. Moreover, I, sadly, was (and still am) a realist (just a nice way of saying that I was/am a pessimist), so I never managed to achieve my dreams. Nevertheless, I enjoyed seeing Eddie achieve his on screen and I definitely lost myself in the film.

Moreover, I not only enjoyed this film because I am an athlete myself, but because I love sports in general: I always watch the Olympics , both the Summer and Winter ones, in their entirety, even if I don’t know the rules of the game or have never tried that particular sport. For example, I have never even skied properly, and I loved learning more about all skiing sports through this film (UP, BACK, FORWARD, DOWN). So, it is enough to be an avid viewer of sport, to enjoy this picture.

Eddie The Eagle’s script was written by Simon Kelton and Sean Macaulay, based on a life of the real Eddie Edwards. I am not familiar with Kelton’s and Macaulay’s previous work, but I loved what they did with this story. I really enjoyed the fact that this movie was very inspiring, hopeful and bright: it showed the power of dreams and the true spirit of sport. I also loved the incorporation of the ideas like ‘the struggle is more important than triumph’ and ‘it is more important to participate than to win’. In addition, the thought that ‘if you gave your best and if you tried your hardest, the result does not really matter’ is very dear and near to my heart, because my dad would alway say this to me before every swim or run. Moreover, the way the film portrayed hard work and passion/spirit for sport as equally important was amazing. The idea that sometimes one moment is all you need was sweet as well. Eddie was loved by the crowds and yet he still he proved that he was more than just a ‘side-show’ or a novelty act. He was a true Olympian. Besides, first and last places are closer than you think.

I also enjoyed that the film did not shy away from the problems of the professional sports. The lack of support from one’s country (or, at least, from the committee full of bureaucrats in ‘suits’ that don’t really get the spirit of sport) and the financial side of this issue were both present in the film. The formalities that surround sports also played a very important part in the film and in the real-life story of Eddie: he was able to find a very lucky loophole in the official rules and make his dream come true.

The theme of unsupporting family (or, at least, half of it) was also explored – that arc had a very nice ending with the reveal of the sweater. I also liked that the film mentioned the dangers of sport – it is very important not to forget that people, who are professional athletes, are seriously damaging and sacrificing their health most of the time.

A few other favorite moments of mine were the conversation with the old coach, the milk toast at the end, the interaction with ‘the Flying Finn’ and the inclusion of the symbolic lunch box for medals a.k.a. broken glasses. The only part of the film that I had a problem with was the portrayal of other athletes as bitch-y – in my experience, that is not true. Athletes tend to be really friendly outside the ring/court/pool/mountain (you get the idea), so I liked that the film, at least, showed them helping Eddie, when he fell after his first 70m jump.

In short, the film’s narrative was a bit cliche and predictable, but it was way too pleasant, enjoyable, and sweet fo me me to complain about the cliches.

Eddie The Eagle was directed by Dexter Fletcher and this picture was only his third time behind the camera. However, being such an experienced actor, I think he did a relly nice job with the project. Fun fact, Fletcher was actually in my home country (Lithuania) for the premiere of this film, because he is married to Lithuanian film and theatre director Dalia Ibelhauptaitė. When I finally moved abroad, interesting filmmakers actually started visiting Lithuania. What a chance of that.

I haven’t seen the 2 other films that Fletcher has directed but, as I have said, I did enjoy the things that he did with Eddie The Eagle. The pacing could have been neater, but it was not that bad, so as to take the viewers out of the film. The montages (the childhood one and the training one) were both nice and entertaining. The actual jumping scenes were also filmed from all angles, so the viewer could experience them both from the jumper’s perspective and from the bystanders perspective. The slow motion culmination of the 90m jump was a bit cheesy, though.  Lastly, the real life photos during the credits tied the film back to reality in a nice way, like with The Finest Hours.

The songs used in the film were very appropriate thanks to Matthew Margeson. I especially liked the ironic yet sweet placement and usage of Van Halen’s Jump and Hall & Oates’s You Make My Dreams Come True.

The movie’s titular character was played by Taron Egerton. I first found out about him through Kingsman (that film was the biggest cinematic surprise of 2014 for me). Egerton was also in a few other UK films – Legend and Testament of Youth. In Eddie The Eagle, Egerton once again proved what an amazing actor he is. His performance was just awkward and childish enough to still make the character believable. I can’t wait for his next film Billionaire Boys Club and then the sequel to Kingsman.

Hugh Jackman played the former disgraced athlete and the eventual coach for Eddie. He did a wonderful job as usual and had really good chemistry with Egerton. Jackman has had a long career full of both great films (X-Men, Les Miserables) and not so great ones (Chappie and Pan…and, of course, that X-Men Origins movie that everybody would like to forget). I am really interested to see what will he Jackman do next, especially after he finishes playing the Wolverine.

If you enjoy watching movies about sports, may I suggest you chech out a few of my favorites like Million Dollar Arm, Race, McFarland USA, The Blind Side, and Draft Day.

In conclusion, Eddie The Eagle was a really cute, simple and charming film, that showed the beauty of sport and the love and passion for it. All athletes are mad to some extent (and that’s okay) and Eddie’s story was a perfect example of that. All elements of the picture – the story, the visuals, and the sound – were crafted nicely, while the combination of them resulted in a very pleasant film that I highly suggest you all watch. 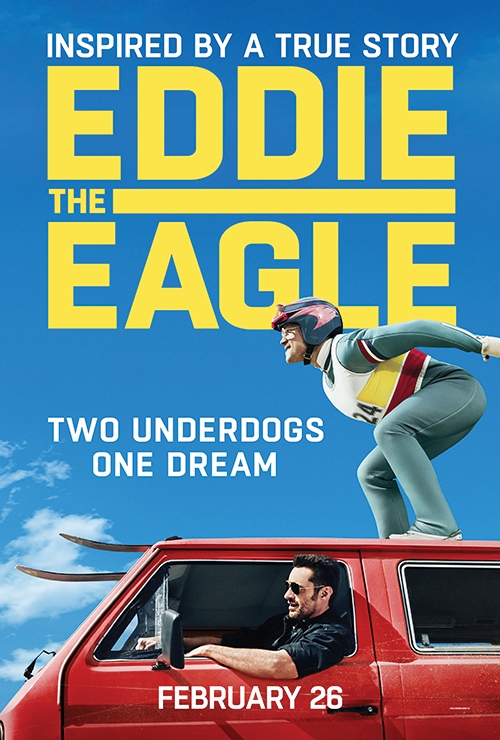