I haven’t written a movie review in more than 2 weeks! That seems unreal to me since I have watched at least 5 films in that time, however, the majority of them were for school – feature films for my film studies course and documentaries for my anthropology course. Other movies were old classics for my own enjoyment, like The Sound of Music and V for Vendetta. But now, let’s review a new film and, to my mind, another awards contender – Steve Jobs.

IMDb summary: Steve Jobs takes us behind the scenes of the digital revolution, to paint a portrait of the man at its epicenter. The story unfolds backstage at three iconic product launches, ending in 1998 with the unveiling of the iMac.

I have always been a fan of Steve Jobs and the products of Apple. Yes, I know that they are way too overpriced and that one of the reasons why people buy Mac Books and iPhones is to look prestigious. And I still don’t care. Call me a hypocrite, but I will be a happy hypocrite with my apples.

Speaking about Jobs as a person – he was a genius in his own right. He was an inspiring control freak and a likable asshole. Never has there been such a bipolar and complicated individual. Jobs not only played the orchestra but manipulated it. Some people say that he had no talent, but to me it looks like he had lots of talent – we just did not know what his talent was.

Steve Jobs (2015) is not the first and probably not the last film about this interesting person. Countless documentaries and 4 features films have been created based on his life. The latest feature film (before this one) was 2013’s Jobs directed by Joshua Michael Stern and starring Ashton Kutcher in the titular role. More than 15 books have also been released on the same subject. The book that I want to read the most and would like to recommend to you is Steve Jobs by Walter Isaacson. The film Steve Jobs (2015) is an adaptation of this 2011 biography.

The script was written by Aaron Sorkin who has previously written the script for one of my all time favorite films about a different genius of technology and media Mark Zuckerberg – The Social Network. Surprisingly, this film, being a biographical film, had no voice-over and all the exposition was made through the dialogue. The whole film was driven forward by the dialogue and it demanded the viewers’ attention – if you weren’t listening for at least a second, you could have easily lost the thread of the story. All of the actors did an amazing job with the deliverance of the dialogue – I have no idea how could they find time to breathe in between that back-and-forth non-stop arguing. It was an interesting choice to structure the film in this way and, in my opinion, this choice was the right one. I also enjoyed the fact that the film did not focus on the whole life story and was set in the backstage of the 3 product launch events. I also liked the open ending – I usually penalize the film for having no clear resolution, but when a film  doesn’t need a resolution, there should not be one and Steve Jobs falls into this category.

Steve Jobs film was directed by Danny Boyle. I have only seen one of his previous films – 2008’s Slumdog Millionaire, which I have definitely enjoyed. Speaking about Boyle’s work on this film, I do not have much to say: for me, the visuals were overpowered by the story or the dialogue, to be precise. However, I did enjoy the overlapping visuals in the scene in the corridor, when Fassbender’s character was telling a story (his plans) to Winslet’s character. In addition, I found it interesting how he used different gauges for different parts of the film: 1984 scenes were filmed on 16mm, 1988 on 35mm and 1998 on a digital film strip.

All in all, Steve Jobs was an amazing motion picture. Personally, it was the type of film that assures me that my love for cinema is a justifiable and exciting hobby, which I would like to turn into a career one day. The acting was spot on and the dialogue – interesting, engaging and unapologetically on the nose. 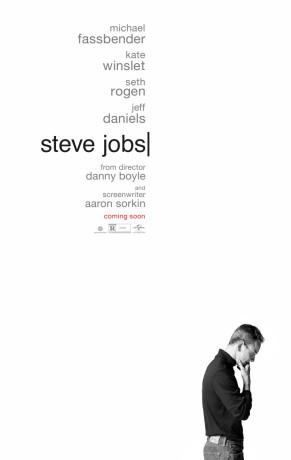