The latest sequel of the beloved 90s franchise rolls into theaters this weekend, so I’ve decided to spend my Thursday re-watching the first four entries of the series, despite the fact that Mission: Impossible films aren’t known for being very connective to each other. The only things they have in common are the same main character and very subtle references to past events.

1996 ‘s Brian De Palma’s Mission: Impossible was the film that turned Tom Cruise into an action movie start. Although, the movie is a year older than me, it still holds up today. The suspense is mind blowing and the CIA infiltration scene is one of the best action movie scenes I have ever seen.

2000’s John Woo’s MI-2 is my least favorite film in the series. It turned careful and clever agent Ethan Hunt in cocky- carefree-James Bond wannabee. The action wasn’t that great either, because they exchanged the suspense of the first film into slow motion parkour extravaganza with guns.

In 2006, J.J.Abrams had his directorial debut on the big screen with MI-3 and injected much-needed suspense and energy into the franchise. The series was back on track. Even the, now infamous, lens flares worked really well. I am a huge Abrams fan (Star Trek and Star Wars, are you kidding me?), so I am really happy that he stayed as a producer on the later films. MI3 also had one of my favorite supporting casts. Philip Seymour Hoffman (may he rest in peace) played a great villain and I wish they would find a way to bring back Jonathan Rhys Meyers’s character. This film also introduced us to Simon Pegg’s Benji, but I’m going to talk more about him in the MI5’s review because he is back for the fifth entry.

Ving Rhames’s Luther is also back for the fifth entry, after sitting the 4th one out and only cameo-ing at the end. Can’t wait to see his and Simon Pegg’s character having a hacker dual.

2011’s Mission: Impossible – Ghost Protocol is my favorite MI movie to date. Brad Bird did an amazing job (I’m really sad that I hated his last movie – Tomorrowland). MI4 also was the film that added Jeremy Renner into the cast. I was really happy about it, because I believe that Renner doesn’t get enough credit for his work. Plus, his character William Brandt was weaved into the series very organically. Anyway, I can’t wait to see him in Rogue Nation as well.

In short, although I’m not a huge fan of crime dramas or spy movies (or action movie that take place in the present day and urban setup in general), I’ve always made an exception for two franchises – Mission: Impossible being one of them (James Bond – the other). Moreover, I have always applauded the fact that MI films have a truly worldwide appeal because of their international setting and diverse cast. Lastly, I feel like Mission: Impossible films are actually getting better with each entry in the franchise (except maybe MI2). I hope that this trend continues and that MI franchise stays a rare exception of a series, whose quality goes upwards and not downwards.

My review of the latest entry in the franchise – Rogue Nation – is down bellow, should you choose to read it.

IMDb summary: Ethan and team take on their most impossible mission yet, eradicating the Syndicate – an International rogue organization as highly skilled as they are, committed to destroying the IMF.

Now, after finally seeing the film, I can assure you that the trend continues and Mission: Impossible movies show no signs of stopping.

Rogue Nation was directed by Christopher McQuarrie. This was only his 3rd time directing a motion picture but his 2nd time teaming up with Tom Cruise. They have previously worked on Jack Reacher together. McQuarrie was also one of the writers on the latest Cruise’s film – Edge of Tomorrow (review). Moreover, McQuarrie co-wrote Rogue Nation’s script with Drew Pearce, who was one of the writers on Iron Man 3. As you can see, all the people behind the camera are quite well acquainted with the summer blockbuster genre. And they definitely delivered.

The actions scenes looked amazing, especially the underwater one. It was extremely suspenseful. The car chase scene which turned into the motorcycle chase scene has also been done impeccability. Story-wise, this movie must have had a script consisting of a ton of pages, because a lot of things happen in the film. We have a variety of different locations, proving once more that MI is a global franchise. There is also a plethora of espionage and a bunch of spy gadgets, which, for me, are a few of the most interesting parts of any movie. Moreover, twist and turns did not disappoint. The usage of glass chambers and masks was also cool. The movie’s run time is quite long, but it never drags or slows down.

This movie calls back to previous MI films much more than other MI films have ever done. The rabbit’s foot had a nice cameo. The twist with the mission’s message was really cool too. The signature Mission: Impossible theme with a slight moderation was, of course, used in the film as well. Also, when they mentioned Great Britain’s MI6, all I could think about was that the meeting between James Bond and Ethan Hunt would be a-ma-zing! However, this film didn’t have a scene where Hunt is horizontally hanging from a rope. They had a few scenes involving ropes, but none of them were similar to the famous shot from the other 4 films. Nevertheless, the money shot – Cruise on a motorcycle – was in the Rogue Nation.

Now, moving on to my least favorite part of the film – the product placement. They must have tried out all of the models of BMW in this film. And not just BMW cars, but motorcycles as well. In addition, I’m looking for a new laptop to buy and the Rogue Nation really wants me to purchase a DELL computer.

To sum up, I really loved the film. The third and final 90s franchise didn’t disappoint. The story was interesting, the action – exciting and the acting – superb. I really really really want to see more Mission: Impossible films. They make me feel like I am a 9 year old once more.

Sadly (or luckily), this review will NOT self destruct in 5 seconds, so read it as many times as you want.

P.S. You can find the reviews of this summer’s sequels of the other 90s franchises here: Jurassic World review / Terminator Genisys review. 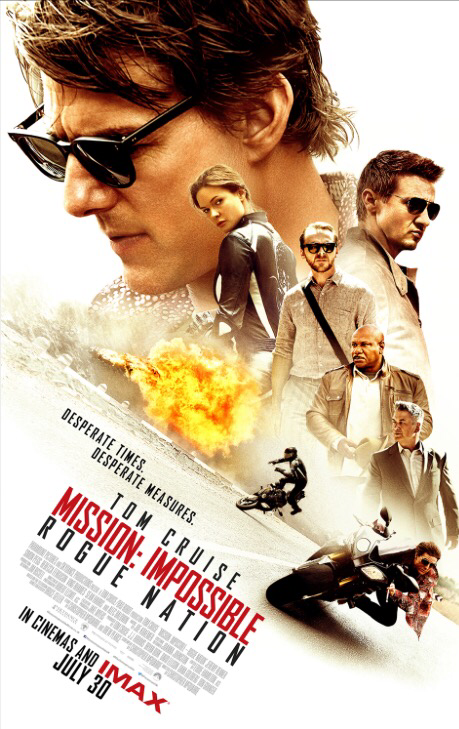