Welcome to the summer movie season! Prepare for a plethora of movie reviews during the next 3-4 months! This time, we are talking about the amazing, the incredible, the unbelievable Mad Max Fury Road.

Fury Road is the 4th film in the Mad Max franchise! However, the 3rd film came approx. 30 years ago. For this reason, I haven’t seen the old trilogy with Mel Gibson. Though, I might watch it when I have time.

Anyway, the fact that I wasn’t familiar with the concept or the world of this film didn’t stop me from enjoying it a lot. I’m a type of person who likes historic and futuristic action movies but isn’t keen on everyday-type-of-situation turning into an action piece. So, this film, which is set in the future but brings back humanity to its roots, was a great combination of all the things I love. Moreover, it has a dystopian vibe which I dig a lot.

George Miller – the creator of the original trilogy – directed this film as well. He did an exceptional job. This film is basically one big action sequence but it never gets boring, it never slows down. It keep you interested and amazed all the time. All the stunts and crashing cars looked extremely realistic and the 3D really enhanced that. There was also quote a lot of grotesque imagery so I can definitely see why the film has R rating. I also really enjoyed the visual pallet of the whole movie (colors brown, orange, yellow) and smooth transitions between scenes (cutting to black and appearing again).

The cast is also really good! Although the movie is called Mad Max, I believe that Charlize Theron’s Imperator Furiosa is the main character. And she is such a bad ass – probably the best female character this year so far. Tom Hardy as Mad Max was also really good (I don’t know how his portrayal compares with Mel Gibson’s, can somebody tell me that in the comments?). Though, Max was the 2nd main character, more like an important supporting character.

Nicholas Hoult as Nux was also a surprising character. He was probably the character with the biggest amount of character development and that really paid of in the end…I tweeted that I couldn’t even recognized Hoult in his role through all the makeup and he favorited that tweet! That made my morning really happy! I am a huge fan of his because of the XMEN movies but his on-screen transition in this film blew me away.

Lastly, the wives were also great characters – at first I was afraid that they would be just a bunch of pretty girls who not only look the same but are, essentially, the same character in 5 bodies. However, all of them brought something new to the table. Rosie Huntington-Whiteley as The Splendid Angharad with her baby story-line, Riley Keough as Capable with her and Nux’s relationship, Zoe Kravitz as Toast with her gun skills, Abbey Lee as The Dag with her seeds and Courtney Eaton as Cheedo with her twist at the end.

The villain of the film – Hugh Keays-Byrne as Immortan Joe was also really great, he was frightening both to look at and to listen to.

As I have said before, the plot of the film rests on the action pieces and not on the dialogue. However, sometimes actions speak louder than words and we definitely got the message of this film. I enjoyed it immensely and really hope that enough of people go see it, so that we would get another sequel with the new cast. Preferably sooner than in 30 years.

All in all, it’s a great apocalypse movie, it’s a great action movie, it’s an amazing film from the cinematographic point of view and it’s even a great film for discussion: will humanity ever come to the end like this? Will our consumerism and desire for fuel and wealth be the end of us? Is water really such a crucial part of our existence? Will we all end up crazy one day? Are social changes in society happening for the better or for worse? What is the role of women? Can we pick our fights or are they pick us? The end quote also reminds us that we should look for answers ourselves and not wait for somebody else to do it for us. 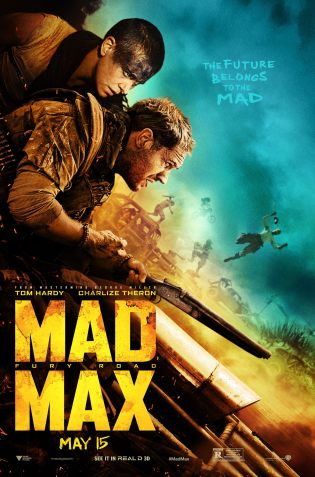