I haven’t done a movie review in a while and kinda missed it. So, I just came back from the cinema and now I am going to take a break from my studies and will review Kingsman: The Secret Service film. (Minor spoilers ahead).

Summary: According to IMDb, this movie tells a story of “a spy organization” which “recruits an unrefined, but promising street kid into the agency’s ultra-competitive training program, just as a global threat emerges from a twisted tech genius.”

The film is based on the comic book The Secret Service, created by Dave Gibbons and Mark Millar and directed by Matthew Vaughn who previously directed the first Kick-Ass movie as well as X-MEN First Class. While I hadn’t particularly liked Kick-Ass I loved the X-MEN prequel. Kingsman is in the middle – I didn’t love it but didn’t hate it either. Actually, I liked it much more than Kick-Ass, so it’s probably more to the plus side than in the middle.

To begin with, I really enjoyed the story of the film. It was modern and fresh but payed homage to the old spy movies. However, the story was  really quite complicated and full of twist and turns. So much happened in this film and it was quite long (129 min), I practically felt like I watched 2 or even 3 movies in one. Speaking about the believability of the story: it pushed the boundaries at some parts and, to my mind, went a little too far. Surprisingly, the movie still wrapped everything up nicely and neatly. I also loved that the film understood that it is just a film and broke the third wall between the characters and the viewers with lines like: “This is not that kind of a movie”.

Visuals: The world building was amazing! All the sets were exquisite and beautiful. The fight scenes were also amazingly filmed: the 360 shots and the shaky cam really worked well. But I have to warn you: the movie has a lot of blood and well…deaths. And a lot of popping heads…

Now, I will go character by character and not only talk about actors’ performances but will also mention their story lines.

Colin Firth – Action movie star? Yeah, this sounded strange to me too until I actually saw Colin in action. He was perfect! Such a cool and collected gentleman with a killer side. He reminded me of James Bond – a Brit in a suit with a secret identity. (Colin’s previous film’s review).

Why I haven’t heard about this actor before? He was great in the role and played nicely with Colin’s character. He brought a breath of fresh air into the film and was the character that every young adult could connect to and root for. I believe we will see this actor much more often in the near future. 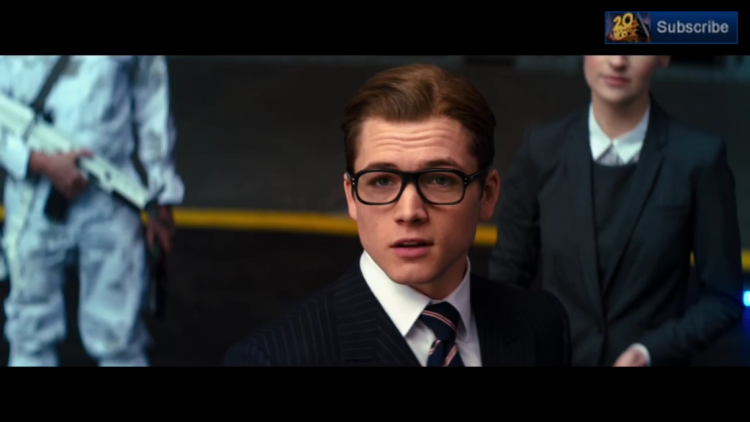 Valentine – the villain – was super weird and crazy with a cool style (damn those hats). However, as a Marvel fan girl, I can’t say that I didn’t like Samuel and neither do I want to say that. Still, his accent was quite strange but it went well with the whole look of the character. His intentions were also strange but nicely portrayed our dependence of our mobile phones. That story line also tackled the issue of all consuming human aggression and our inability to deal with it. The last themes: overpopulation and global warming and the terrible means to fix these problems. BTW, anybody want to go to McDonalds?

I’m not really familiar with this actor’s work but I do know that I have definitely seen him in a film before. The only thing I would like to say about his character: I believe he provided a great balance to Egerton’s character in the last part of the film when someone else wasn’t around anymore.

I have only seen Sofia in Street Dance 2 before and liked her so much more in this film. Her character showed that disability doesn’t hold you back. I could probably watch the whole movie about her: she was a strong and fun character which could have been developed more deeply.

Lastly, Michael Caine as Arthur/Chester King did a great job as always. (I talk more about Michael as an actor in this review). Sophie Cookson as Roxy was the only weak character for me. I couldn’t connect to her and wasn’t interested in her faith too.

All in all, I believe that this is a fun, quirky and interesting film. It has unexpected turns and while it sometimes goes a mile too far, it still manages to keep you focused and interested till the end. I would really like tho see this movie turn into a franchise but I doubt that will happen. However, if you don’t like weirdness and a lot of unnecessary killing – take my friendly advice and don’t watch it.

Photos: screenshots from the trailer